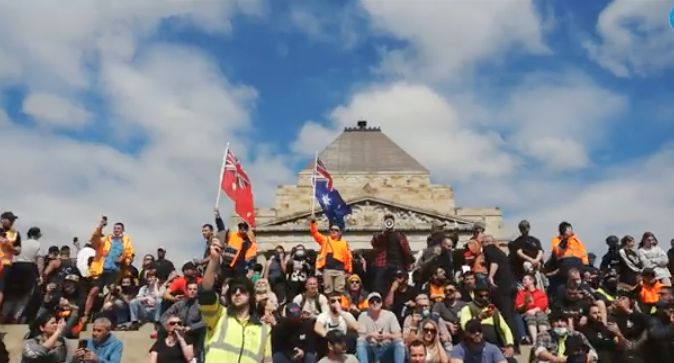 This video of the protest at the Shrine of Remembrance (22.09.21) is from my on the ground perspective while reporting. It’s a chronological highlight of key moments that made up the totality of the incidents at the Shrine that day, incidents which have since polarised and divided parts of the nation.

I filmed non-stop for around 4 hours since the moment protesters arrived at the Shrine to the moment police fired on the last remaining groups of protesters to clear the site. Although much has been said by leaders and media personalities in the community that were not present on the day, including our Prime Minister, I’m still not entirely sure what informs their opinions on what took place.

There seems to be a disconnect between the reporting in the mainstream media, and the simple realities on the ground that day. The media have taken isolated incidents that may or may not have even occurred in some instances and then exaggerated them to represent the character of all that were present. Some of the misinformation about people trashing the site, are totally inconsistent with what occurred on the day.

Watch this highlight and if need be the entire livestream for full context: https://fb.watch/8luJRrlvfN/ and then compare it to the reporting by the msm and comments made by those that were not present.