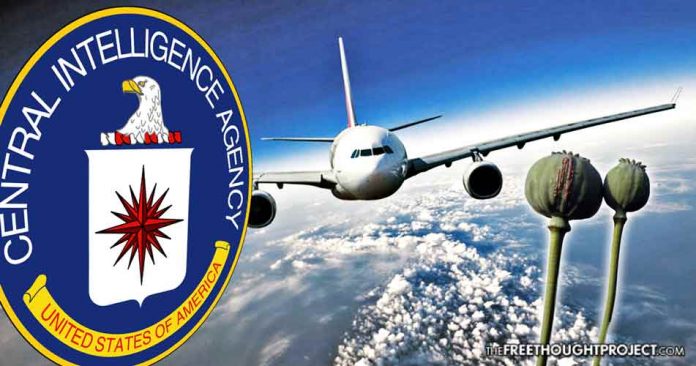 When you hear “Air America,” there is a good chance the 1990 movie starring Mel Gibson and Robert Downey Jr. is the first thing that comes to mind. The plot revolves around two men who find themselves in the middle of the CIA’s private airline, which is used to deliver food, supplies, and even opium, to a small kingdom during the Vietnam War.

But what if it was more than just a movie plot?

According to the Central Intelligence Agency’s own website, Air America is in fact described as “an airline secretly owned by the CIA,” which was used as “a vital component in the Agency’s operations” in the small Southeast Asian Kingdom of Laos, from 1955 to 1974.

The version presented on the CIA’s website is authored by William M. Leary, a former history professor at the University of Georgia. He attempted to dispel the rumors by blaming Air America’s poor public image on the fact that the Blockbuster version featured “a cynical CIA officer who arranged for the airline to fly opium to the administrative capital of Vientiane for a corrupt Asian general—loosely modeled on Vang Pao, a military leader of the mountain-region-based Hmong ethnic group.”

“The film depicts the CIA man as having the opium processed into heroin in a factory just down the street from the favorite bar of Air America’s pilots. The Asian general, in return, supplied men to fight the war, plus a financial kickback to the CIA,” Leary wrote. “Ultimately, we learn that the Communist versus anti-Communist war in Laos was merely a facade for the real war, which was fought for control of the area’s opium fields.”

In an opinion piece for the New York Times in 1993, titled “The CIA Drug Connection is as Old as the Agency,” Larry Collins noted that the CIA has had its hand in the international drug trade since the Korean War in 1950, when they traded weapons and heroin, in exchange for intelligence.

The practice continued as the Vietnam War started in 1955, and Collins noted that the CIA appeared to have one interest in mind—the cultivation of the opium poppy.

“During the Vietnam War, operations in Laos were largely a CIA responsibility,” Collins wrote. “The agency’s surrogate there was a Laotian general, Vang Pao, who commanded Military Region 2 in northern Laos. He enlisted 30,000 Hmong tribesmen in the service of the CIA.”

The operation was discussed on an episode of PBS’ Frontline, titled “Guns, Drugs and the CIA,” which aired in 1988. The documentary looked at the Meo Tribe, whose members served as “the foot soldiers of a secret CIA army” in Laos, just across the border from North Vietnam.

Ron Rickenbach, former official at the U.S. Agency for International Development, served in Laos during the 1960s. He told Frontline that for the soldiers involved, they initially believed that what they were doing was “in the best interests of America,” even if it meant being involved “in some not so desirable aspects of the drug traffic.”

“These people were willing to take up arms. We needed to stop the Red threat and people believed that in that vein we made, you know, certain compromises or certain trade-offs for a larger good,” Rickenbach said. “Growing opium was a natural agricultural enterprise for these people and they had been doing it for many years before the Americans ever got there. When we got there they continued to do so.”

Fred Platt, a former pilot in Laos, told Frontline about the incentives the Meo tribesman had to take part in the trade.

“When a farmer raised a crop of opium, what he got for his year’s worth of work was the equivalent of 35 to 40 U.S. dollars,” Platt said. “That amount of opium, were it refined into morphine base, then into morphine, then into heroin and appeared on the streets of New York, that 35-dollar crop of opium would be worth 50, 60, a hundred thousand dollars in 1969—maybe a million dollars today.”

How does Air America come into play? According to PBS’ Frontline, the CIA’s secret airline played the role of both a transportation service for the Meo farmers’ cash crop, and the only lifeline between the tribespeople and the outside world—to the point where Meo children “came to believe that rice fell from the sky.”

While Air America reportedly only operated from 1950 to 1976, the CIA’s obsession with opium has continued to flourish over the years.

The CIA supported the Mujahideen rebels in Afghanistan—in the name of fighting the Soviet Army—in the 1980s. According to a 2009 report from the United States Institute of Peace, the CIA turned a blind eye to the group’s involvement in the opium trade.The U.S. then encountered Afghanistan’s poppy-rich land again in 2001, when it invaded the country. In the years since the invasion, Afghanistan’s opium production, which is “an important source of funding for the Taliban,” has increased 35-fold.

As The Free Thought Project reported in April, the North Korean government is also a major opium producer, which provides some of the necessary context surrounding the U.S. government’s interest with, and the mainstream media’s obsessive and speculative coverage of every move made by the small nation.

When looking at the CIA’s history of fueling proxy wars to overthrow foreign governments, and using drugs like opium as a means of control, it makes Hollywood’s version of “Air America” sound much less like a fictional movie, and much more like a documentary.