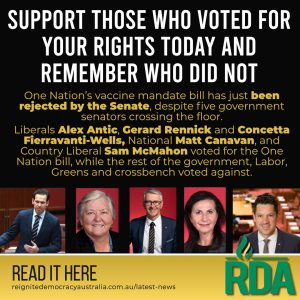 One Nation’s vaccine mandate bill has just been rejected by the Senate, despite five government senators crossing the floor.

Liberals Alex Antic, Gerard Rennick and Concetta Fierravanti-Wells, National Matt Canavan, and Country Liberal Sam McMahon voted for the One Nation bill, while the rest of the government, Labor, Greens and crossbench voted against.

In one final twist – Pauline Hanson and Malcolm Roberts were unable to vote for their own bill, because they are still in Queensland, attending parliament remotely.

Hanson asked for leave to be granted to record that they were in support – and president Slade Brockman denied her that leave.

Government leader in the Senate, Simon Birmingham, then explained that during remote participation senators can state their voting intention so it is recorded in Hansard but “it doesn’t change the tally … there is no process to change the tally of votes”.

So in the end all Hanson got was a line or two in Hansard.

Award for most unhinged goes to Jacquie Lambie

Jacqui Lambie voted for the segregation and discrimination of Australians who want freedom of choice.

Independent Senator Jacqui Lambie made a series of bizarre threats toward unvaccinated Australians during a recent interview on Sky News Australia.

You put others before ourselves. You can decide not to choose those checks, no one is forcing you, but if you don’t do them, you can’t work where you want to work, it is as simple as that. That is the way it is.

If you want to work as a cabbie, you need to licence to drive a cab, people without a licence are not being discriminated against.

If you want to work in aged care, you need to have a flu vaccine, that has always been in place since before Covid-19 was even a twinkle in a Chinese bat’s eye for goodness sake, that is the way it is.

People have a right to choose, but you don’t have right to put vulnerable people’s lives at risk.”She also accuses One Nation of using the bill as a “fundraising exercise”.

The problem is politicians like senator Hanson and senator Roberts are using people’s fear to boost their own election campaigns, and they are using fear to make money and that’s what this is about from One Nation.

2 thoughts on “Remember who voted for your rights today… and who did not.”