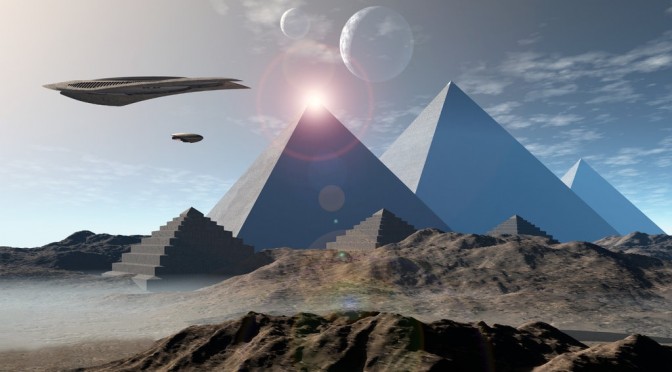 Millions of people believe we have been visited in the past by aliens, what if it were true?

Did ancient aliens really help to shape our history and if so,might there be a connection between aliens and Earth’s hidden pyramids?

Perhaps the most famous and most mysterious megalithic structure in the world are the Great Pyramids of Giza.

The enormous size and weight of the stones multiplied by the sheer number of them makes one thing certain: the construction of  the Great Pyramid is one of the greatest wonders and mysteries of architectural engineering.

The pyramid was the tallest building in the world for four thousand years. According to traditional historians Pharoh Khufu began building the Great Pyramid in about 2,550 B.C. as a tomb. About 2,300,000 limestone blocks were used to build the Great Pyramid.

On average each block weighed about 2.5 tons to 15 tons. The largest stone in the Great Pyramid weighs 400,000 pounds. Each side of the base of the pyramid is 755 feet.

They were origonally 481 feet (147m.)tall, however today they stand at 451 feet, (138 m.)The four corners of the pyramid align with the four cardinal directions of the earth. The second pyramid at Giza was started by Khufu’s son Khafre in about 2,520 B.C. Khafe also built the Shpinx.

The third Pyramid at Giza was built by Pharaoh Menkaure in about 2490 BC. But no bodies have been found in these pyramids. What were the pyramids used for?

Did ancient aliens give these kings the technology to quarry and move these block into place. Was it ancient alien technology which allowed the stone cutters to make such precise cuts on these megalithic stone?

All pyramids are marvels of technology and  there are many theories behind how they were created from the mundane to the fantastic. This enlightening documentary reveals some shocking truths that everyone needs to hear: