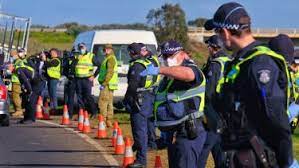 Daniel Andrews is evil to the core. He must be stopped.

Can I ask how a drug peddling hotdog seller that sold hotdogs as a front, covering his selling of cocaine and speed outside the tunnel night club in the early nineties became Premier of Victoria and even after himself admitting it, is still the Premier. Honestly what the f#*@ is going on. He has devastated Victoria and has his personal security contractors (the Victorian Police) running amok and causing absolute mayhem to all Victorians regardless of any of them committing any crimes. Stupid new rules implemented that would see the rest of the world laughing at us all are created daily. If rumours are correct about these 2nd Pfizer vaccines having microchips in them, then the Victorian Police must of been among the first to have them. Listening to them speak is robotic like.

For example, I watched a video taken by a guy that got followed home in Victoria by six black Public Response unit SUV’s. He pulled up his driveway got out of his car and asked a Senior Sergeant, what was the reason for this. The senior Sergeant realising that he is being filmed, stammered, the guy asks again, and the Senior Sergeant replies,” Because you were driving on a highway”. It was like his robotic memory bank had a minor melt down when quizzed, obviously a flaw that would need to be repaired. That’s not all either. They have every single cop focused on the roads with booze/drug buses , camera cars, marked police cars out everyday and night with more road blocks than anyone would ever of seen.

Thousands of people are being fined and or losing demerit points to a degree where there will be no-one left driving on our roads. I said that to a few people recently and bugger me three days later it was reported that the Victorian Police have flooded our trains network , fining people for not wearing masks, but best yet, arguing. Even the people that were wearing the masks being fined for arguing.

Its totally out of control here in Victoria and I knew The Victorian Police are a registered business as to declare their incoming funds but since when did they become Contractors for the Victorian Government ? I thought they were employed to uphold the law and protect the innocent but now I see they are no more than a private security company being paid by the Victorian Government who are the biggest crime syndicate in Victoria if not Australia.

We need a coup as nobody is helping us.