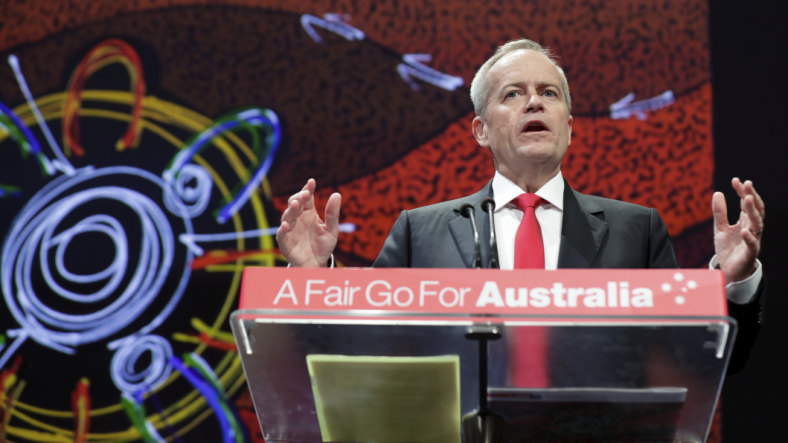 Opposition Leader Bill Shorten has pledged a Labor government would massively increase Australia’s funding to the United Nations for regional refugee programs and lift the annual refugee intake, in a compromise deal that avoided a major stoush over asylum seekers at the party’s national conference.

Mr Shorten said he wanted to “rekindle Australia’s reputation as a good international citizen” when it came to refugees – but not at the expense of restarting the people smuggling trade.

He told Labor’s national conference the party must maintain its support for turning back asylum seeker boats and processing boat arrivals offshore on Manus Island and Nauru.

The Labor for Refugees ginger group withdrew resolutions condemning boat turn-backs and offshore processing after the party’s Left caucus resolved not to support those motions.

In a rare division on policy at this year’s conference, Left-aligned frontbencher Andrew Giles moved to give 6000 failed asylum seekers a second chance at gaining refugee status through an independent merits review process. He said it was a “logical step” flowing from Labor’s commitment to abolish the “flawed” fast-track assessment scheme.

The review was opposed by the Right and immigration spokesman Shayne Neumann, who said it would be costly and clog the system. The proposition was declared lost on the voices.

But in an agreement reached behind the scenes, Mr Shorten announced a Labor government would quadruple funding to the United Nations High Commissioner for Refugees, and boost the annual refugee intake by lifting the number of community-sponsored places.

Australia currently gives $25 million a year to the UN refugee agency – Labor would lift this to  $100 million a year, or $500 million in the first five years of a Shorten government.

“This funding will speed up legitimate settlement pathways. It will deny people smugglers a product to sell,” Mr Shorten told conference delegates on Monday morning.

Furthermore, Labor would triple the number of federal police officers working overseas to shut down people smuggling operations at their origins.

Mr Shorten confirmed he would increase the annual refugee intake to a total of 32,000 – as The Sydney Morning Herald and The Age revealed on Sunday.

This increase would occur through expanding the community sponsorship program, wherein businesses, communities and unions sponsor refugee places in Australia. Labor would increase this program from 1000 to 5000 places over time.

Labor also affirmed its existing policy to increase the government-funded refugee intake to 27,000 from 18,750 by 2025. It did not put a time frame on increasing the community-sponsored program.

“If country towns and regions want to sponsor humanitarian intake, well, it is not the job of the Commonwealth to get in the way,” Mr Shorten said. “This will make sure there’s no cost to the taxpayer.”

Labor is wary of appearing soft on border protection, particularly in the wake of an attack by the Morrison government over Labor’s support for a bill that would enable refugees on Manus and Nauru to come to Australia for medical assessment more easily.

Labor frontbencher Richard Marles appeared to walk back support for that bill on Monday, arguing the immigration minister must retain the final say over medical transfers.

“It doesn’t lie with doctors, we’re not about to subcontract that out,” he told Sky News.

However, Mr Neumann’s office indicated Labor still supported independent MP Kerryn Phelps’ push to make medical transfers easier, and would vote for it in the lower house if and when a vote occurred next year.

Labor’s three-day national conference in Adelaide comes months before a federal election the party is well-positioned to win, with Monday’s Ipsos poll putting Labor ahead 54 to 46 on a two-party preferred basis.

Separately, a successful resolution by Labor MP Ged Kearney condemned the Coalition for its failure to resettle refugees currently on Manus Island and Nauru, but did not propose moving away from offshore processing.