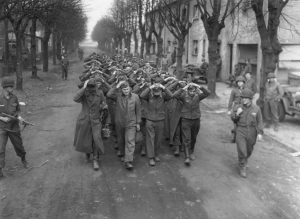 26th March 1945: A group of German prisoners captured at Friedrichsfeld are marched through a town in Germany, after the crossing of the Rhine by the US 9th Army. (Photo by Fred Ramage/Keystone/Getty Images)

READ MORE AT THIS IS EUROPA

EUROPE RENAISSANCE: book sales royalties are independent of our donations dependent information platform. We are 100% dependent upon donations without which we would close.  Contact euroman_uk@yahoo.co.uk to discover how you can help us to spread the truth.

Soft population decrease and displacement is achieved by various state initiatives. These include state-sponsored emigration, family planning, and promotion of lifestyles that limit conception. Also used is ethnic replacement by immigration and cultural misappropriation. This is how the globalists intend to make impotent the peoples of Europe.

When time is pressing brutal ethnic cleansing is far more ruthless. It is a sobering thought that Globalism, which is laundered Bolshevism, is still calling the shots today.

Slaying on an industrial scale, forced deportation, starvation, enslavementб and work-related deaths are preferred methods used by Britain, its dominions, and the Americans.

The Third Reich, so the victors claim, is supposed to have carried out genocide by the most laughable methods imaginable. One must assume that Hitler’s Germany won a competition to devise the costliest, most time-consuming, ineffective and ludicrous methods of ethnic-cleansing imaginable.

If Israel today finds difficulty in classifying Jews how were the Reich’s embattled armies supposed to tell the difference in the occupied territories? To leave the battlefield to collect millions of people most of who are of no clearly defined ethnicity.

What then, to transport millions by scarce road and rail infrastructure thousands of kilometres across war-torn Europe and then to gas them. To believe this you have to be a special kind of stupid.

Wouldn’t it be far easier to use General Eisenhower’s Dummies Guide to Democide system? Corral the captives in the wilderness and starve them to death. It doesn’t cost a nickel and there is no transport or gas chambers to find.

Megacaust is stuffed with examples of quick and cheap population reduction tried and tested by Britain, the U.S. and their Soviet allies that actually works far more efficiently free of cost.

Had the Reich first approached the Allies with their gas chambers suggestion, Churchill, Stalin and Eisenhower would have thought the Germans one pfennig short of a Deutschmark. Far more efficient to mass murder by starvation as did the British, the Americans, the Soviets and various regimes that the allies support.

Bolshevik inspired artificial famines martyred tens of millions of Russian and Ukrainian Orthodox Europeans. Similar depopulation programs were applied by the British in India’s Bengal, Australasia and Ireland, and South Africa during the Boer War.

In spring 1945, U.S. General Eisenhower had no qualms about placing a near million surrendered German troops in holding camps and starving them to death. Virtually all these unprotected captives died in captivity and it didn’t cost a brass cent. This single act of ethnic cleansing saved the U.S. a fortune in costs associated with prisoner upkeep.

Most of Germany’s defeated forces yielded in the harsh winter of 1945. Deprived of shelter in a harsh climate a human can expect to perish within 3 hours. Denied water the human body dies within 100 hours. Left to starve humans die within three weeks. By this method, American, British and French armed forces quickly and without cost disposed of over 1.5 million surrendered German troops, a million in the Rhine valleys alone. Millions of civilians after the war were killed by starving them or by creating an environment in which hunger-related diseases reaps millions of martyrs. The Soviets were equally good at disposing of their excess captives as were the British.

The Allies intent to dismember the routed Reich created de-population problems. Millions of uprooted ethnic Germans were terrified of the American supplied Red Army during the winter of 1944 – 1945. Entire populations, driven from their homes, were on the harshest winter roads to the dismembered Reich.

In spring 1945 Winston Churchill was approached by Stanislaw Mikolakczyk (1910 – 1966). Poland’s Prime Minister in exile asked what to do about the six million ethnic German being driven from German territory that had been ceded to Poland as prize of war.

Winston Churchill had the final solution to hand: “Don’t mind the five or more million Germans.  Stalin will see to them.  You will have no trouble with them; they will cease to exist.” – Senator Homer Capehart; U.S. Senate, February 5, 1946.

There you are, in just one small part of allied overrun Europe Winston Churchill and Soviet dictator Joe Stalin wiped from the face of the earth an estimated six million ethnic Germans. Obligingly, the state-sponsored media keeps quiet about the depopulation of ethnic Germans, which in total claimed an estimated 13 million mostly German and Baltic civilians.

There you are; no need for costly and inefficient transport and gas chambers. Use instead bayonets, bullets, and tank and truck wheels and tracks, farm scythes, tractors, sledgehammers, knives, anything your blood-soaked whipped into frenzy troops can lay their paws on.

If as we are told (yawn) the ‘Nazis’ gassed six million Jews then the Workers Reich is thoroughly deserving of using absurd methods of ethnic cleansing that defy common sense. Sadly, common-sense isn’t common anymore.

Rheinwiesenlager: the forgotten Genocide of millions of  German POW; by order of Eisenhower

English Excerpt out of link under Maria Schmidt

In BLUE drawn the path of the water, in RED circled the area where the Rhine meadow camps used to be.

The mass Graves of the POW’s are in the flooded areas, more extreme weather coming to the already affected area

Related books: THE ALL LIES INVASION, WITNESS TO HISTORY, TESTIGO DE LA HISTORIA: HISTORIA SIN CENSURA (SPANISH EDITION),  MY LAST TESTAMENT LET GOD JUDGE ME,  FOR THOSE WHO CANNOT SPEAK, MEGACAUST, THE RED BRIGANDS, RANSACKING THE REICH, and DEATH OF A CITY.

One thought on “SILENCE OF THE LAMBS TO THE SLAUGHTER”