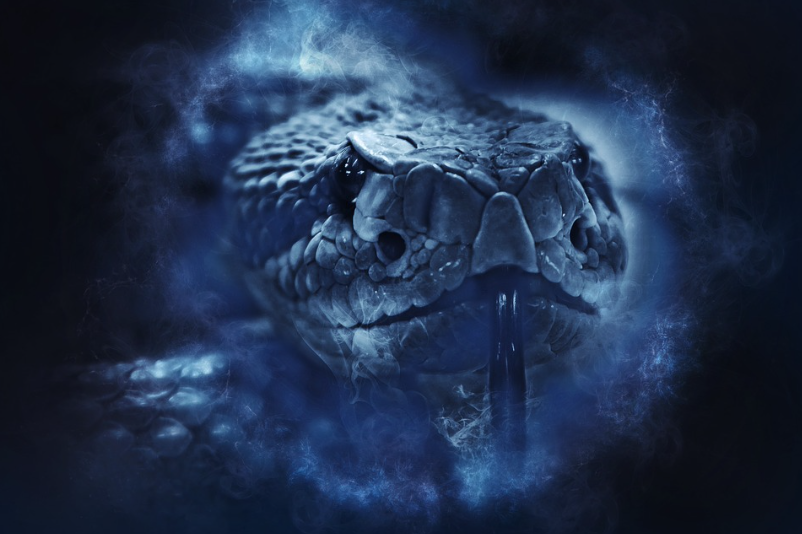 WHAT REALLY MAKES YOU ILL

A lot of attention is being paid to recent ‘revelations’ about snake venom; these revelations include claims that it is the real cause of ‘Covid’; that it is what Remdesivir is made from; that it is in the Covid injections and that it has been added to the water supply.

There are many problems with these claims, not least of which is that they have been shown to be unsubstantiated. But the veracity of these claims is not the focus of this article; instead, its purpose is to suggest a possible reason for the media attention to this topic.

There is, however, a basic point that needs to be emphasised first, which is that there never was a ‘new disease’ that originated in Wuhan, China, whether it came from bats, snakes or even a laboratory. This fact alone destroys any claims about snake venom being the cause or even a possible cause, because there is no such ‘disease’ as Covid.

The popularity of this ‘snake venom’ story raises a significant question, which is: why has it been able to gain such a huge level of attention, especially on social media platforms, at the same time that ‘truth’ is increasingly censored?

I therefore decided to investigate ‘snake venom’ within the literature of the medical establishment. This led me to formulate the idea that there may be a reason that the ‘establishment’ is allowing – or maybe even actively encouraging – an increased level of attention to be paid to the topic of snakes, snakebites, and snake venom.

A July 2017 editorial entitled Snake-bite envenoming: a priority neglected tropical disease that was published in The Lancet, states that,

“Last month, WHO reinstated snake-bite envenoming to its list of category A neglected tropical diseases (NTDs), which is an important milestone in disease control.”

It is rather strange that ‘snakebite envenoming’ is considered to be a disease.

Nevertheless, the important point to note is that snakebite envenoming was reinstated in 2017, which shows that it had already been considered relevant at an earlier date.

“WHO added snake bite to the list of NTDs in 2009, but it was later removed without explanation. The Bill & Melinda Gates Foundation has so far rejected approaches for funding because snake bite is not infectious and therefore cannot be eradicated by vaccination.”

The unexplained removal of snakebites from the list is certainly intriguing!

It is revealing, but unsurprising, that the Bill and Melinda Gates Foundation would only consider health problems for which vaccines can be produced.

“…concerns about the low availability of safe, effective antivenom immunoglobulin products for the Sub-Saharan African region…”

The recommended product referred to by the WHO is called EchiTAbG, which is said to be ‘of medical relevance’ for snakebites from certain vipers that are,

“…known to cause the most cases of snakebite deaths in the world.”

This product, according to the manufacturer’s website, is composed of equine immunoglobulins. In other words, horses are injected with the venom and their ‘antibodies’ to that venom are extracted for the purposes of creating an ‘antivenom’ product. This type of process is also used for the production of ‘monoclonal antibodies’, which are described as ‘laboratory-produced molecules’.

The problems with ‘antibodies’ have been discussed in our book and in previous articles, but it must be emphasised here that they are not specific, despite claims to the contrary. This is also discussed in some detail in the article entitled Antibody Specificity?

“However, it has been known for decades that antibodies are in fact not as specific as they are claimed to be.”

This therefore raises serious questions over the ability of any product claimed to be an ‘antivenom’ to be able to respond to a specific venom.

The relatively recent, but substantial level of attention being paid by the medical establishment to ‘snakebite envenoming’ can be seen by the fact that in May 2019, the WHO produced a 70-page booklet entitled Snakebite Envenoming, which is available from the web page entitled Snakebite envenoming – A strategy for prevention and control. In addition, the page refers to achieving the objectives of UHC2030. UHC refers to universal health coverage, which, according to the UHC2030 website,

This of course involves the introduction of the Western medical establishment system, which promotes pharmaceutical ‘medicines’ and vaccines as essential aspects of ‘healthcare’, into every country that is a member of the WHO, which is the overwhelming majority of them, with few exceptions. The fact that this medical system does not deliver ‘healthcare’ but is provably detrimental to human health, is also discussed in detail in our book, What Really Makes You Ill? Why Everything You Thought You Knew About Disease Is Wrong.

The May 2021 WHO fact sheet entitled Snakebite envenoming explains the extent of the problem and states that,

“Snake bite is a neglected public health issue in many tropical and subtropical countries. About 5.4 million snake bites occur each year, resulting in 1.8 to 2.7 million cases of envenomings (poisoning from snake bites). There are between 81,410 and 137,880 deaths and around three times as many amputations and other permanent disabilities each year.”

The page also states that,

“Most of these occur in Africa, Asia and Latin America. In Asia up to 2 million people are envenomed by snakes each year, while in Africa there are an estimated 435,000 to 580,000 snake bites annually that need treatment. “

The question that needs to be raised is therefore: why is there a concerted effort to make an antivenom product specifically for sub-Saharan Africa when a greater number of snakebites occur in Asia?

There is clearly a reason for efforts to increase intervention within sub-Saharan Africa in the name of ‘healthcare’ and this may be gleaned from the September 2021 WHO web page entitled Snakebite envenoming: an interactive data platform to support the 2030 targets. The page starts with the statement that,

It is increasingly obvious that the ability to ‘track’ everyone is high on the agenda for control by the ‘establishment’ as promoted through the ‘global goals’ of the UN 2030 Agenda, as well as other ‘global’ organisations such as the WEF, but it would seem that sub-Saharan Africa has not yet fallen prey to this intrusive technology. This may be one of the reasons that so many ‘diseases’, especially so-called ‘infectious diseases’ are claimed to be more prevalent in that area than elsewhere. This notion allows the medical establishment to claim altruism as the reason to intervene in this area in order to deliver ‘healthcare’, and the Bill and Melinda Gates Foundation to intervene there in order to deliver vaccines that are claimed to be ‘life-saving’, which they most certainly are not.

This effort can be seen by the further statement on the web page that,

“A new WHO Snakebite Information and Data Platform will deliver these capabilities and stimulate work towards achieving the global target to halve the number of deaths and disability due to snakebite envenoming by 2030.”

The following statement on the same web page clearly highlights the effort to include the tracking of people, not just snakes,

“Perhaps the most interesting feature of this evolving platform is interaction – the public can participate and contribute by sharing photos of what they think are venomous snakes along with their location data.”

It is abundantly clear therefore, that snakebite envenoming is not a new concern. It is however, a recent addition to SDG3 of the 2030 Agenda, as can be seen by a February 2019 article entitled Strategy for a globally coordinated response to a priority neglected tropical disease: Snakebite envenoming, which states that,

“Central to the design of this strategic plan is the ambitious goal of halving the deaths and disability caused SBE by 2030. The consensus of the SBE-WG was that implementing an integrated program based on building capacity and directing response to snakebite-affected regions offers the most effective approach to achieving this goal. Rather than risk this initiative being perceived as a standalone issue, the SBE-WG considered that efforts to combat SBE need to be incorporated within national and regional health plans and aligned with global commitments to achieving universal health coverage and the Sustainable Development Goals (SDG)”

“Comprehensively addressing these issues is a key priority for WHO. The SBE-WG, concerned by the current critical situation in sub-Saharan Africa, have set a target of delivering at least 500,000 effective antivenom treatments to that region each year by 2024. By the end of 2030, the target is to deliver, globally, 3 million effective regionally specific treatments per year. To achieve this, WHO will work to strengthen the production of antivenoms, improve regulatory control, and most importantly, rebuild and reinvigorate the market by ensuring that safe and effective products are available, accessible, and affordable.” [Emphasis added]

In addition, the article states that,

“Combined with parallel efforts on community engagement and education, health systems strengthening towards universal healthcare and SDG3, effective partnerships at local, national, regional, and global level, and critically-needed funding, the WHO SBE road map can be transformative and enable many of the world’s poorest and most vulnerable communities to have a chance at living healthy and productive lives.”

It is not the intention of this article to suggest that the people promoting the idea that ‘Covid’ is caused by snake venom are intentionally promoting the goals of the UN 2030 Agenda, but they certainly are doing so, even if unwittingly.

Whether we see an increase in mainstream media attention to snakebites in the near future remains to be seen; but it is always important to be aware of the ‘bigger picture’ and to see that there are always multiple reasons for ‘scare stories’ to be released, even if they appear in the so-called ‘alternative media’.

WHO issues new recommendation on antivenom for snakebites
https://www.who.int/news/item/19-08-2018-who-issues-new-recommendation-on-antivenom-for-snakebites

Snakebite envenoming – A strategy for prevention and control
https://www.who.int/publications/i/item/9789241515641