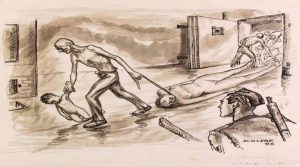 Translated from the Italian by Germar Rudolf

Note: Here is the most recent publication by the world’s foremost holocaust revisionist, the Italian Carlo Mattogno. The following are only a short description and excerpt from the book. The scholarly research on the holohoax is typically dense, lengthy, dry, and doesn’t make for easy reading. There is a free pdf to download for those who are interested in delving into the information much more deeply, or you could purchase the book and support holocaust handbooks financially.

In response to the rise of Holocaust revisionism in the first half of the 1980s, Israeli Historian Gideon Greif decided to record and publish the recollections of former Auschwitz inmates who claim to have served in the so-called Sonderkommando. This inmate unit is claimed to have been charged with assisting the SS in mass-murdering jewish deportees in the infamous gas chambers, and obliterating the victims’ bodies on pyres and in cremation furnaces. Greif claims that many surviving members of this unit refused to testify in the immediate postwar era, presumably because not even their fellow jews would believe their outrageous stories. In 1995, Greif published his collection of testimonies in German, and ten years later also in English under the title We Wept without Tears.

If fellow jews sympathetic to their co-religionists already doubted the veracity of these testimonies at a time when the witnesses’ memories were still fresh, one can imagine how critical scholars would evaluate depositions made many decades later, when memories had inevitably deteriorated and were to a large degree replaced with impressions created by the biggest historical propaganda campaign the world has ever seen.

This book critically reviews the statements by the former Auschwitz inmates interviewed by Greif (Josef Sackar, Abraham and Szlama Dragon, Jaakov Gabai, Eliezer Eisenschmidt, Shaul Chasan and Leon Cohen). The scope of this study is extended by including the testimonies of three jews who had been deported to Auschwitz from Greece, among them the memoirs of Shlomo Venezia, whose various testimonies were publicized in Italy with great fanfare during the 1990s and early 2000s. This review of Sonderkommando testimonies is rounded out by a critique of several brief depositions by a few further witnesses hardly known to historiography.

The author shows that all of these testimonies, just like those analyzed in the other two volumes of this trilogy, fly in the face of documented and forensically proven facts, are riddled with internal inconsistencies, and in many aspects contradict other witness statements and the orthodox narrative. They are studded with historical and technical absurdities taken straight from propaganda fables long-since-rejected as untrue even by mainstream historians.

In the author’s assessment, all these witnesses fall into three main categories: intentional liars, braggarts and morons.

There is no historical event where the memory of any witness has been subjected to more post-event rewriting, reshaping and replacement than the holocaust. As Carlo Mattogno has shown in the previous two studies of this trilogy, not even testimonies recorded within months or at most a few years after the events can be trusted to accurately reflect what could possibly have happened. Therefore, testimonies of later years and decades are bound to reflect not real memories that survived the ravages of human forgetfulness, but rather mere echoes and reflection of the absolutely dominant orthodox narrative, and increasingly so as the temporal distance grows.

To put it succinctly, from a historiographic point of view, late testimonies on the holocaust recorded many decades after the witnessed or claimed events are worthless.

So why write and publish a study such as the present one in the first place? There are two reasons for this:

For these two reasons, a book like this is required to set the record straight. 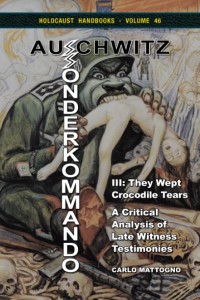