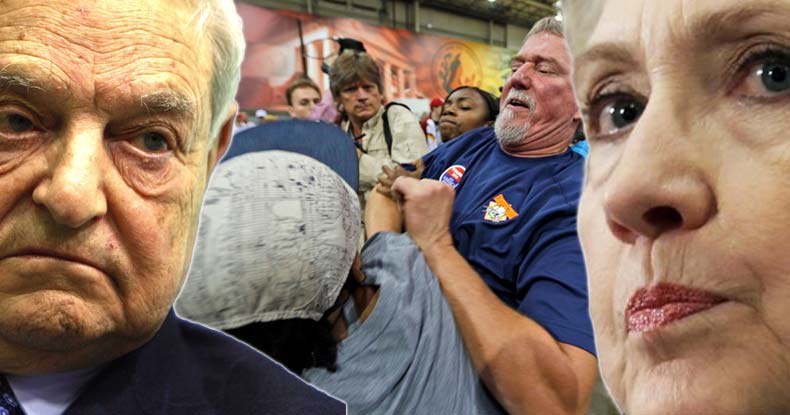 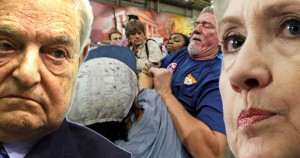 Longtime Clinton aligned organization MoveOn.org is raising funds to continue to disrupt Donald Trump rallies, according to emails sent out to members. While seemingly innocuous at first, the emails are potentially indicative of something much more calculating and sinister.

“Last night, without consulting local police, Donald Trump abruptly cancelled a rally in Chicago in the face of massive and overwhelmingly peaceful student-led protests,” an email to MoveOn.org members stated. “We’re being flooded with aggressive emails and social media posts from Trump supporters. Some of them are threatening. We refuse to be intimidated by Donald Trump, Fox News, or anyone else…”

So here’s the plan: We’ll support MoveOn.org members to call out and nonviolently protest Trump’s racist, bigoted, misogynistic, xenophobic, and violent behavior — and show the world that America rejects Trump’s hate. And to keep it going, we’re counting on you to donate whatever you can to cover the costs of everything involved — the organizers, signs, online recruitment ads, training, and more.

The email asks for a donation of $3 to continue the campaign against Trump.

So what could be sinister about that, right? But for those versed in far left ideology, Rules for Radicals, written by Saul Alinsky, there is no mistaking the hallmarks of left-wing radicalism. Clinton was a follower of Alinsky’s political philosophy and developed a relationship with him in the late 1960s.

“If you read some of the left-leaning writings of people like Saul Alinksy, you understand exactly what they’re doing. This is part of the plan,” former presidential candidate Ben Carson said.

In light of the recent violence that has transpired at a Trump event in St. Louis, the subsequent canceling of the Chicago rally, a closer analysis of the dynamic at play is warranted.

This past weekend, political operative Roger Stone stated that the disruptive violence at the Trump rally was actually a political false flag event staged by the Clinton campaign in an attempt to discredit rival Bernie Sanders.

“The entire conflagration in Chicago is a Hillary Clinton operation,” Stone said during a phone interview with Alex Jones. “Frankly, I can’t see Bernie Sanders having anything to do with it… this is not his handiwork.”

Remember that Moveon.Org was an organization founded with the distinct purpose of fighting back against the effort to impeach President Bill Clinton, thus allowing America “move on” to issues of substance, with billionaire European financier George Soros contributing millions to the progressive organization.

This election cycle, the group has officially endorsed Bernie Sanders for President after members overwhelmingly voted for him in a poll against the other candidates vying for the Democratic presidential nomination. But that doesn’t mean the leadership doesn’t have a strategic agenda that differs from that of their member base.

The fact that the group’s members have endorsed Sanders actually gives the organization’s leadership room to operate in a manner that could actually hurt Sanders and bolster the efforts of longtime ally Hillary Clinton.

So while officially backing Bernie Sanders, the traditionally Clinton aligned organization sent out a fundraising emails regarding the Chicago protests of a Donald Trump rally Friday that resulted in the Republican presidential front-runner canceling his scheduled event, with the group admitting that they provided protesters and material support for the protests against Trump.

See what they did there.

A group that has officially supported Sanders, but is historically considered a Clintonian organization, is materially supporting mass protests against Trump.

So, if things devolve into violence at Trump rallies that MoveOn.org is advocating and supporting protesting, which presidential candidates will ultimately suffer?

Obviously Sanders and Trump – leaving Clinton to be the main benefactor of these strategic moves.

Of course, Trump and Bernie supporters are no angels, and they are playing right into the game. Trump has, in fact, instigated violence at his own rallies in response to these protesters.

In August, Trump issued a warning to protesters at his rallies, “I don’t know if I’ll do the fighting myself, or if other people will.” In November, he said a protester who disrupted one of his events “should have been roughed up.” Then, in February, he clearly went over the top by saying, in regards to a protester, “I’d like to punch him in the face.” Then in February, he managed to top the previous statement by telling a rally, “If you see somebody getting ready to throw a tomato, knock the crap out of them. . . . I promise you, I will pay for the legal fees.”

However, make no mistake that the events you’re seeing transpire at Trump rallies are being orchestrated in part by a political elite Clinton campaign struggling to remain relevant in the face of internal scandal, Bernie’s surprising populist appeal, and the unexpected Trump juggernaut.