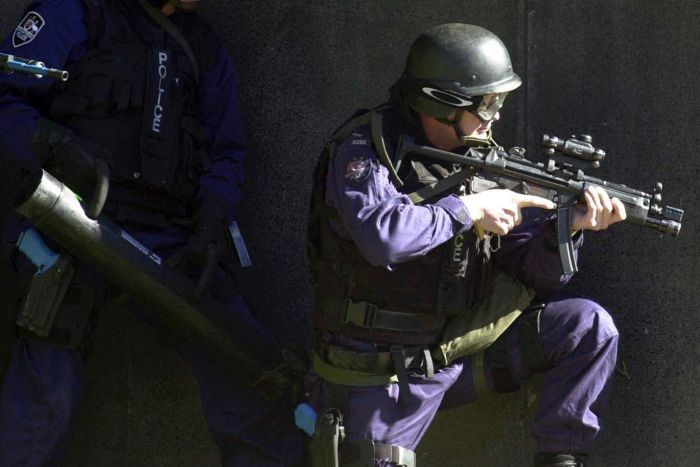 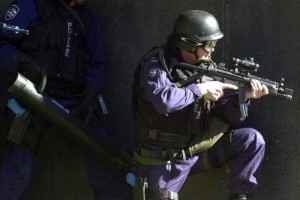 Anti-government extremists known as “sovereign citizens” have been identified as a potential terrorism threat in Australia by a confidential NSW Police report.

What are sovereign citizens?

The NSW Counter Terrorism and Special Tactics command assessment — obtained by 7.30 — suggests there are as many as 300 sovereign citizens in the state, and that their numbers are growing.

It also suggests they have “the motivation and capability to act against government interests and should be considered a potential terrorist threat”.

Interactions with police increased 50 per cent in 2011, with a “notable increase in threats of violence”.

The US Department of Homeland Security has listed them as the number one domestic terror threat in America.

Detective Superintendent John O’Reilly is the commander of the Counter Terrorism and Special Tactics Operation Group for NSW Police.

He said NSW police had been examining overseas trends and threats.

“Sovereign citizens are people that don’t buy into our legal framework, our system of government,” he said.

“They consider themselves individuals and operate outside the law and outside our tax system.”

Police intelligence of incidents involving sovereign citizens in Australia ranges from displaying homemade registration plates and “plans to use paint bombs to disrupt court proceedings”, to making plans to kidnap a judge, judicial officials and a police officer.

The report also states that in 2012, sovereign citizens threatened to burn down the home of a judge and “cause harm with firearms” and had “plans to murder Sheriff Officers if they attempt to seize property”.

While Commander O’Reilly stressed Australia had not experienced any of the high impact violence resulting in death or casualties associated with the movement overseas, he said there were indications of radicalisation.

“A number of instances have ended up in people being placed under arrest and sometimes there has been a degree of resistance on the basis that they claim that the police officer has no authority over them,” he said.

“We are always conscious of preventing terrorism and we are mindful of any movements that have the potential to go down that path.”

John Wilson has been identified by senior police sources as an extremist member of the sovereign citizen movement in Australia.

The 73-year-old retired dentist has been fighting the system for 20 years.

His path towards sovereign ideology started in the late 1990s, when he was evicted from his home because he refused to acknowledge the mortgage over his house.

“It means you are your own master, in other words you have the right to your own body, your own freedoms, and if anybody wants to impose something upon you, they have to do it lawfully.

“If you are a sovereign person, you make the laws for yourself. You decide in your own conscience what you want to do.”

Mr Wilson only pays fines or taxes when he thinks they are fair. He has been to court more than 200 times and jailed.

In it, he threatened to burn down the premises he was evicted from.

He said that he was the victim of a government conspiracy and that there were hundreds of other Australians who shared his beliefs.

“There would be many hundreds scattered across the continent. The Queenslanders are very conscientious, the Victorians are doing a good job and even now in Western Australia we are getting more and more farmers and ordinary people, saying no, this is not right,” Mr Wilson said.

“At the moment I have membership of about 95 people, but I haven’t really pushed it.”

Deadly US attacks linked to movement

The sovereign citizen movement began in 1969 in the United States as an anti-tax, anti-government group called Posse Comitatus.

Members believed that the United States federal authority was unlawful, and only accepted small levels of government.

Up to 300,000 Americans identify as sovereign citizens, according to the Southern Poverty Law Centre. Of those, 100,000 are considered extreme.

Before the 2001 World Trade Centre terrorist attacks in New York, the most destructive loss of life uring peacetime in the United States was the Oklahoma City bombing in 1995.

168 people died, including 19 children under the age of six.

The two key conspirators were domestic terrorists and Timothy McVeigh’s partner in the attack was Terry Nichols, a person designated by the FBI as a sovereign citizen.

Since the Oklahoma bombing, 32 law enforcement officers have been murdered by domestic anti-government extremists in America.

Two of the officers killed were serving under former Chief of the West Memphis police, Bob Paudert in May 2010. One of them was his son, Brandon Paudert.

“It has been five-and-a-half years since he has been killed and it was the most devastating event that has occurred in my life,” Bob Paudert told 7.30.