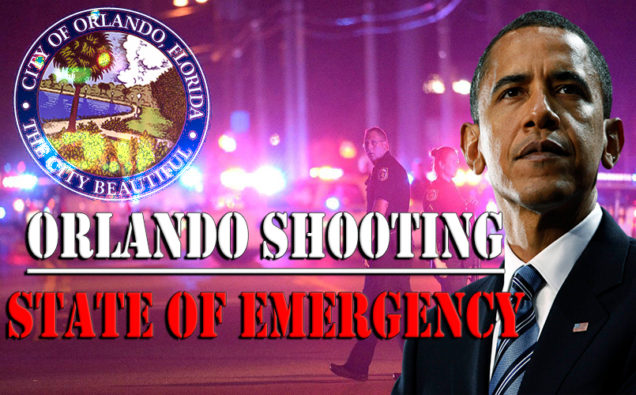 Editors note: Let me say right away that when I am reporting on this event, i was not there, so i do not know definitively what occurred, if anything. There is a case to be made for this event being exactly what we are told with 50 dead, 53 wounded and it being the most deadly mass shooting in US history. At the same time there is a few points that indicate we may be looking at yet another false flag/orchestrated event. My point is, I don’t know what has happened, but what i do know is this… it’s going to be used to come after the rights of the American people by a President that is more deadly than the guns he is trying to ban! Lets get into this….

Fifty people have been confirmed dead and another 53 are injured after a mass shooting at a gay nightclub in Orlando, Florida.

The death toll makes the attack the deadliest mass shooting in US history, eclipsing the 2007 Virginia Tech massacre which left 32 people dead.

Authorities say they are investigating it as an act of terrorism.

The suspect behind the gay nightclub shooting in Orlando, which left dozens dead and injured, has been identified as 29-year-old US citizen Omar Mateen, born to Afghan parents, US media reported. The CBS network added that the FBI is currently checking whether he was linked to extremists.

So, just what is a “state of emergency” & what does it mean? Well, that’s the thing, because this is ambiguous at best. We can look back to the man-hunt after the Boston marathon attacks to see what it meant there, with people being marched out of their homes at gunpoint with their hands on their heads like criminals.

What I don’t get is that if this is a “lone wolf” as we are being told, then just what are they trying to protect people from?

“The phrase ‘state of emergency’ will pique people’s interest. We need to do a better job to explain up from what it means. Too often we hear ‘state of emergency’ and that is the headline instead of the explanation. It is one of the steps in the process that is designed to keep everyone safe,” Aaron Gallaher of the Florida Division of Emergency Management told the Herald-Tribune.SOURCE

“To keep everyone safe”… from what?

As I reported in an earlier article, there were no ambulances on the scene despite the mass shooting take place less than 5 blocks from an Orlando medical centre. I show some of the images available on the video that accompanies this article and you can read the earlier report HERE!

UPDATE: I have had Mr Anthony Patch contact me to offer up his take on the ambulance situation having worked as an EMT for 27 years…

This is actually the standard protocol when it comes to mass shootings/incidencts such as what was unfolding in the Orlando night club.

With this in mind, im now thinking this might not be as strange or ambiguous as i first thought.

In addition to the “no ambulances”, i find it somewhat strange that someone in the management of Pulse nightclub was able to find time and safety amidst the unfolding carnage to update the Facebook status to inform patrons what to do… eh? WTF?

I dont know whats more bizarre, the fact someone posted to Facebook, or the fact that they thought people in the club would feel the need to check Facebook to see what to do as the bullets were flying! I know we are living in an age where social media is King, but come on, seriously?

OBAMA MORE DEADLY THAN THE GUN

As with most of the recent mass shootings, in the days to come we will see a push to go after the guns, its inevitable. However, when we look at the statistics, perhaps it would be more effective to ban Obama, or put him in jail, than to take the guns from the American people. Why do I say something that sounds so ridiculous? Well its all in the stats!

Aaron & Melissa Dykes of TruthStreamMedia reported back in December 2015….

The following analysis considers the FBI’s definition of a mass murder, which is defined as “a number of murders (four or more) occurring during the same incident, with no distinctive time period between the murders”.

When all incidents where four or more people were shot in a single event are broken out by president going back to Reagan (considering the database only stretches back to 1982), there just so happens to have been a startling increase in mass shootings since Obama, the most pro-gun control president America has had in modern history, took office.

(You can download the full list of names, dates, locations, and numbers of deaths per mass shooting by president prepared for this article here.)

Look at the difference between all other presidents and Barack Obama.

Notice anything here? We’re talking about a more than six-fold increase from the number of mass shootings in the eight years Bush Jr. was president compared to the last seven years under Obama, and his 2nd term isn’t even up yet!

Special Note:
It’s no secret that Obama has zealously used the latest version of the NDAA to implement false flag operations anywhere, anytime, he so chooses.  The NDAA has illicitly legislated powers to the Executive Branch to execute false flag shootings, bombings and assassinations within the 50 states for propaganda purposes in the interest of ‘National Security’.   This is precisely the reason for the dramatic increase and intensity of mass shootings throughout the country.  Yes, the U.S. Federal Government has unlawfully arrogated power unto itself to commit heinous atrocities against the American people in order to protect the citizenry homeland.  Only in AMERIKA, also known as the USSA!

“FALSE FLAGS” are LEGAL PROPAGANDA PRODUCED by the Department of Defense

Thoughts and prayers to those affected.

One thought on “STATE OF EMERGENCY! 50 Dead In Orlando “Terror Attack” At LGBTQ Club”