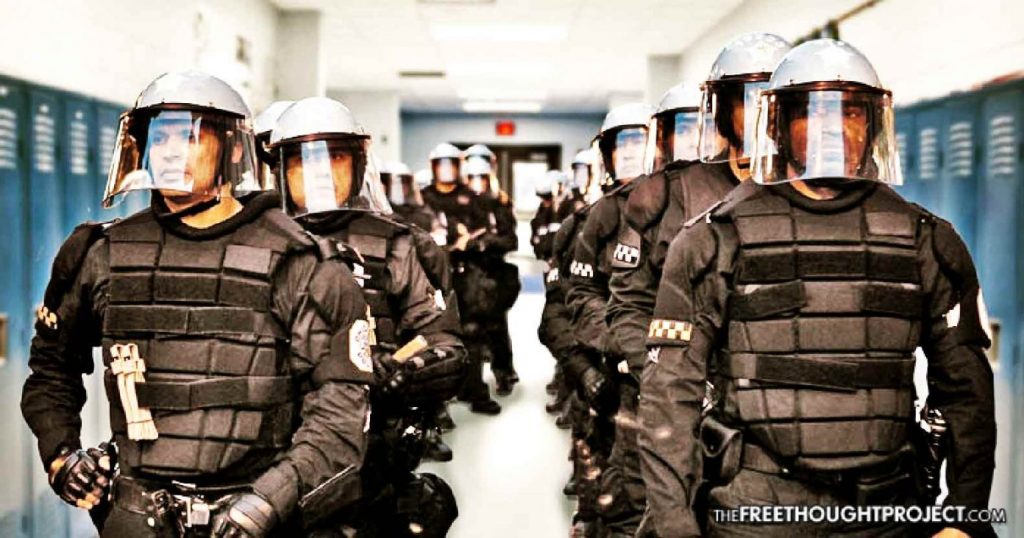 Worth County, GA — Violated children and furious parents have just filed a massive lawsuit after the Worth County Sheriff’s office conducted an illegal search of 900 students — in the name of the war on drugs. The rights-violating intrusive and aggressive patdowns and drug dog searches at the school yielded absolutely nothing.

An Atlanta attorney is now representing multiple students who were subjected to invasive and outright horrifying body searches during a mass — and warrantless — search for drugs at a South Georgia high school. Attorney Mark Begnaud, who filed the class-action lawsuit, called out the sheriff for conducting “900 illegal, suspicionless searches.”

“This was a textbook definition of overreach,” said Begnaud. “They pulled 900 students out of class. They did full, hands-on body searches.”

To highlight the sheer unnecessary police state tactics of the tyrannical Worth County Sheriff Jeff Hobby and his deputies — not a single bit of contraband was found.

According to Begnaud, the Georgia Bureau of Investigation has now opened an investigation into the incident. However, no charges have been made.

As the Daily Report notes, Begnaud said the suit seeks certification as a class action on behalf of every student who was searched. It also asks for unspecified compensatory and punitive damages, as well as a declaratory judgment that a law enforcement officer violates a student’s constitutional rights when he conducts a body search absent either voluntary consent or an individualized suspicion that the student has broken the law. The case has been assigned to U.S. District Judge Leslie Abrams.

On April 14, when the students of Worth County High School returned from spring break, they arrived at school to find a police state had taken over. The sheriff and his deputies — with no probable cause — detained and illegally searched every single child in the school, all 900 of them. More than 40 cops from five other law enforcement agencies participated in the raid.

When kids went home that day to tell their parents what happened, naturally, they were furious as it is a gross violation of the children’s 4th Amendment rights.

Naturally, Sheriff Jeff Hobby is standing by this rights violation on a massive scale, noting that as long as a school administrator was present, the search of the children was legal.

Apparently, in the sheriff’s mind, school administrators can usurp the constitutional rights of children in favor of unlawful police searches.

But school officials and the student rule book disagree.

As WALB reported at that time, Worth County Schools attorney Tommy Coleman said in order for the Sheriff’s office to search any students, they’d had to have reason to believe there was some kind of criminal activity or the student had possession of contraband or drugs.

“If you don’t have that then this search would violate an individual’s rights,” said Coleman. “[It] violates the constitutional right and enforcing them the right against unreasonable search and seizures.”

Interim Worth County Superintendent Lawrence Walters said he understands parents concerns about the drug search at Worth County High school on Friday, according to WALB.

“I’ve never been involved with anything like that ever in the past 21 years and I don’t condone it,” said Walters.

Walters said he was notified that there was be a search but pointed out that he did not give permission nor did he approve the mass groping of children.

“We did not give permission but they didn’t ask for permission, he just said, the sheriff, that he was going to do it after spring break,” said Walters.

“Under no circumstances did we approve touching any students,” explained Walters.

Adding insult to injury, many students complained that they got far more than just a pat down.

According to the complaint,

Defendants’ searches of students were intrusive, performed in an aggressive manner, and done in full view of other students. For example: a) Deputies ordered students to stand facing the wall with their hands and legs spread wide apart; b) Deputies touched and manipulated students’ breasts and genitals; c) Deputies inserted fingers inside girls’ bras, and pulled up girls’ bras, touching and partially exposing their bare breasts. d) Deputies touched girls’ underwear by placing hands inside the waistbands of their pants or reaching up their dresses; e) Deputies touched girls’ vaginal areas through their underwear; f) Deputies cupped or groped boys’ genitals and touched their buttocks through their pants. 8. Defendants had no warrant or other authority to perform a mass search on hundreds of public school children.

When multiple students complained about being groped by at least one sicko deputy, Sheriff Hobby ensured parents and school officials that “corrective action was taken to make sure the behavior will not be repeated.”

Exactly who that cop was and what ‘corrective action’ was taken, remains a mystery.

“I’m okay with them doing the search, if it was done appropriately like the school has done in the past,” said father of two Jonathan Luke. “But when they put their hands on my son, that’s crossing the line.”

Aside from not finding a single bit of contraband, the sheriff’s search was also entirely uncalled for as the Sylvester Police Department did a search on March 17 — just a few weeks before — and found no drugs.

But Hobby told reporters he didn’t think that search was thorough enough, so he decided to do his own. And, this time, he’d grope every student.

As for the 900 counts of deprivation of rights under the color of law that the sheriff should be facing, despite the investigation, not a single charge has been levied against the department.

Matt Agorist is an honorably discharged veteran of the USMC and former intelligence operator directly tasked by the NSA. This prior experience gives him unique insight into the world of government corruption and the American police state. Agorist has been an independent journalist for over a decade and has been featured on mainstream networks around the world. Agorist is also the Editor at Large at the Free Thought Project. Follow @MattAgorist on Twitter, Steemit, and now on Facebook. This article first appeared here at The Free Thought Project.