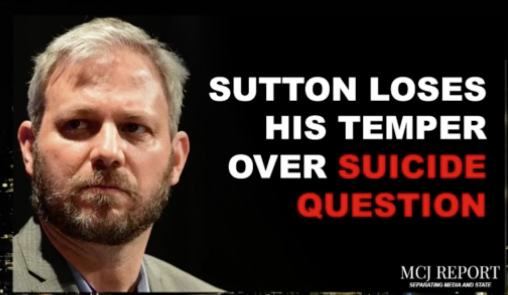 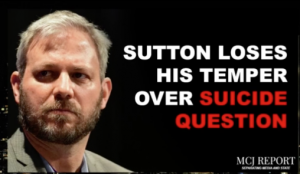 Brett Sutton lost his temper at a press conference recently and stormed out when a reporter asked him an important question about the growing rate of suicides since Covid and subsequent lockdowns.  You see Brett Sutton only likes to answer questions in his ‘comfort zone’.   We now have a growing number of youth suicides in young children under the age of 18 years. So when the questions got too tough for him to handle he decided to mirror the behaviour of his NSW counterpart Brad Hazzard and storm out.  Cutting off the reporter mid-stream who very nicely asked about the high suicide rates, particularly in young people.

This is what the Reporter asked “We’ve had eight females under the age of 18 died by suicide, according to the latest coronial data between January and the middle of July this year. But the highest number in five years, 51% increase when it comes to teenage self-harm and emergency departments, I mean how are you preparing or how does your, how do your rules take that into account? Given this, this mental health emergency that we’ve heard so much about.”

Sutton’s answer “These are absolutely tragic circumstances, but I’ve been asked this question 100 times. It’s always the same answer that the alternative is that this goes on for longer and it’s harsher, or we suffer hundreds of deaths, literally hundreds of deaths.”

Mm, he has been asked this question 100 times. Not happy the reporter now made it 101 times.  He clearly resents the question and having to answer it (again☹)

The reporter then asks him about lifting restrictions to give people……Now we can’t hear the end of the sentence. As Brett Sutton cuts ins and replies”

“I’m not going to go to decisions that I may or may not make two weeks from now in terms of the …and his gone mumbles something about he’s gotta go, thank you.

Now our esteemed Premiere appears on the stage and a different reporter tries to continue the question with “What is your message to People who are really upset by the fact that we haven’t seen any deaths from Covid in Victoria this year yet, but we have seen the deaths of girls that we’ve learned up under these restrictions?”

Now Danny Boy is annoyed straight away, raises his hand like a school principal HANG ON, HANG ON We’ve got a coronial report for every suicide. It’s a terrible tragedy. But let’s not be speaking as if we can attribute with absolute certainty what motivated each of those tragic acts.”  Huh?  As the MCJ report points out here, a different story when they very quickly announce someone died of Covid without waiting for the coroner’s decision. Then announce they’re locking us down again. Without all the facts!!

So, the message here is, do not ask Danny or Brett any questions they are not comfortable answering. Their arrogance knows no bounds. They are treating us like our opinions, our concerns don’t count, and we are not allowed to question them. Plus, they might get angry about it and throw a temper tantrum and walk out. Like they’re 12.

So let’s see what the MCJ Report says about the suicide numbers and why seeing the Politicians have put in the ‘too hard’ basket “or the “I  don’t’ want to talk about it basket. “

The BBC March this year reports COVID lockdown children as young as eight, self-harming. The Bradford Royal Infirmary We’ve seen all sorts of tragic things that we haven’t seen before. He went on to say, although the majority of children were in their teens, those as young as eight. We’re being seen, which was extremely unusual before the pandemic. Some of the youngsters had access to alcohol or drugs, with others trying to escape lockdown at home by jumping out of windows.

A ChildLine service reports a 16% rise in the number of children aged under 11, having counselling sessions for their mental health. Since lockdown was first introduced, citing loneliness, low mood, low self-esteem. Depression anxiety.

A 13-year-old girl told the helpline. I found being inside for so long really difficult. I keep checking my phone and getting upset when nobody is talking to me. Another teenager said, “ I can’t cope with this virus. I haven’t got itbut I’m terrified that my family is going to get it”.

Paris – a Paediatric hospital has seen a doubling in the number of children and young teenagers, requiring treatment after attempted suicides since September. Doctors elsewhere report similar surges with children, some as young as eight, deliberately.

Japan – Children running into traffic, overdosing on pills and otherwise self-harming in Japan.

Emergency interventions to protect young people in Victoria from suicide and child abuse? Children aged 13-18 most at risk account for 75%  of crisis interventions.

Tia Sweeney, an 18yr teenager with mental issues, said there wasn’t much support during the Covid pandemic. When she told emergency department nurses, she wanted to kill herself. They sent her home with a sedative. Three weeks later, when the 18-year-old woman was admitted to Sutherland Hospital, the emergency department threatening suicide, chose again, sent her home, and she was told she would be better off in the community.

The number of 12-to-17-year old’s presented to the emergency department with self-harm or suicidal thoughts increased 47% in the year to July 2021 compared to 2019.

Emergency departments NSW Sydney Children’s Hospital network, Saint Vincent’s and Northern Sydney increased between 42% and 211% in the 12-17yr age group with self-harm and suicidal tendencies. All this information is publicly available.

Are Daniel Andrews and Brett Sutton are aware of this, I think are this is why they don’t like it when reporters raise the question of mental health issues and suicide numbers increasing substantially during Covid and the lockdowns they are inflicting on the State. The best form of denial is to go on the defensive. We are seeing this across the board with politicians all too often these days.

We are locking up the young who have no health issues, denying them access to school, exercising, socialising with friends and family.  Now they’re scared, lonely and lost.

It’s all okay because our leaders, Premieres, the Health departments, don’t want to address it.  A lot of these young people may never recover.

Covid 19 is less dangerous than many other harms, including influenza. Yet, small children can’t even go to the playground, ride on the swing, or go down the slide.

We are being run by tyrants and if we don’t raise up our young who can’ speak up for themselves, they will never forgive us.