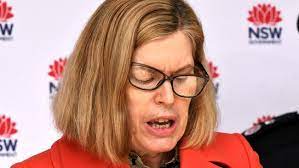 The Australian people are now hostages and are being kept in harsh lock downs by a rouge and tyrannical Government as punishment for low COVID-19 jab rates.

We are now being held against our will in lockdown to drive up vaccination rates while our freedoms, human rights and economy are trashed.

The Australian Government, police and media are now the enemy of the people and are committing human rights abuses against the Australian people while showing utter discontent for our laws and way of life.

We are now being ordered by grubby health officials and sociopathic Premiers that we are not permitted to smile, laugh or talk to friends or neighbors even while wearing dirty face nappies.

The Government of Australia have decided to push the fake DELTA variant to the extremes with over half the country now suffering through harsh lock downs indefinitely.

Billions of dollars is being wiped from our economies with the entire Sydney and surrounds building industry crippled, businesses destroyed and millions of people now being pushed out of work,

This outrageous and violent attack against the Australian people is being deployed by the Government, Big Pharma and Military interests with only two ways out, “jabs in our arms or a peoples revolution”.

Prime Minster SCO-MO is now working on making the shots mandatory while segregating the population and restricting the movements of those who have not been jabbed with COVID Biological weapons. 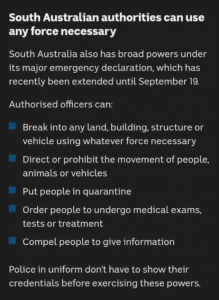 Many Australian states like South Australia have incredible powers under state of emergency laws where the public have little to no real rights to protect themselves against police or Government.

We can now clearly see that the Australian Government along with our police forces are willingly and knowingly breaking our laws in order to enforce Draconian COVID measures.

We are not only in the worlds biggest medical experiment but the Government are also testing the limits of social control and how far the Australian people can be pushed before breaking point is reached.

If the Australian people do not stand up against this disgusting and evil tyranny then the future of this country is going to be terrible indeed.