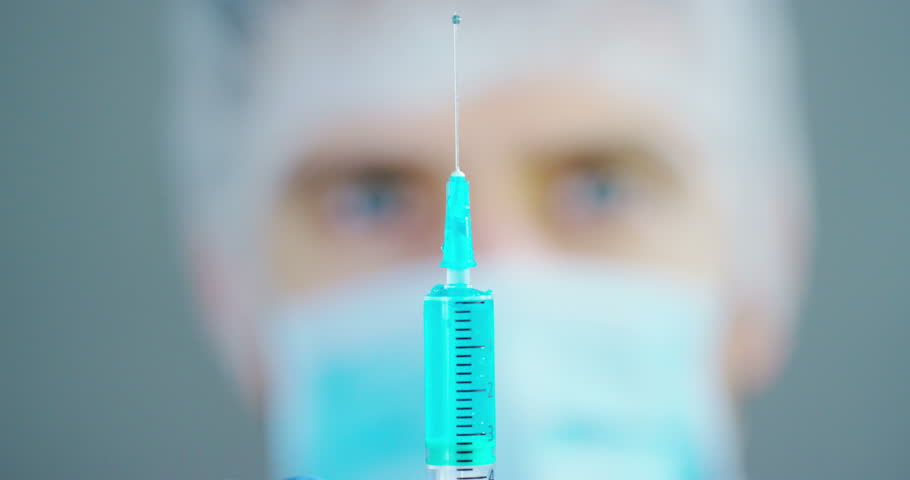 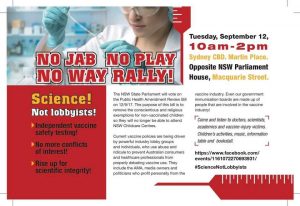 SYDNEY RALLY AGAINST NSW NO JAB NO PLAY LEGISLATION

NO JAB NO PLAY NO WAY!
SCIENCE! NOT LOBBYISTS!

NSW politicians are voting on legislation that will include a No Jab No Play Policy next Tuesday, 12 September.

Parents who choose not to vaccinate will be treated like criminals and neglectful parents under the new legislation. Parents will also be placed at a severe disadvantage regarding loss of childcare opportunities, loss of work and thus income. The proposed legislation is also based on flawed science and a lack of informed consent.

NSW PARENTS WILL CONTINUE TO PROTEST UNTIL THE NSW PARLIAMENT ADDRESSES THEIR URGENT VACCINE SAFETY CONCERNS!

We demand the immediate establishment of an Independent Vaccine Safety Commission that will establish the following:
• INDEPENDENT SAFETY TESTING of all vaccines on the current childhood schedule. Also, safety testing of the current combination of vaccines and their ingredients -THIS has never been done!
• INDEPENDENT SCIENTIFIC ENQUIRY into the autoimmune diseases being linked to the aluminium adjuvants in vaccines. (1)
• INDEPENDENT LONG-TERM HEALTH STUDIES of vaccinated vs unvaccinated children. Current similar studies worldwide indicate that unvaccinated children have significantly better health outcomes than vaccinated children.
•LEGISLATION THAT ALL MEDIA OWNERS, and their board members, must declare their conflicts of interest in the pharmaceutical industry in all their publication and websites.
Rupert Murdoch owns the Daily Telegraph and around 52 billion dollars of media worldwide. The Daily Telegraph has openly taken credit for establishing the No Jab No Pay legislation. (2) (3) (4)

URGENT ACTION IS NEEDED! LONG TERM SAFETY AND EFFICACY STUDIES OF THE CURRENT AUSTRALIAN CHILDHOOD VACCINE SCHEDULE HAVE NOT BEEN DONE!

“The Australian government’s vaccination policies are not based on evidence-based medicine.
No Jab No Play policy is based on false information about the control of infectious diseases and incomplete scientific evidence of the harm this policy will cause to the Australian population.” (5)

Herd immunity from vaccines is made up science:
“Evidence from all the prominent public health officials of the 20th century that demonstrates ‘vaccine-created herd immunity’ did not control infectious diseases and in fact is an unproven theory. This is critical information to promote in order to support the doctors who want to speak up and to prevent the government from implementing mandatory vaccination in Australia.”
https://www.youtube.com/watch?v=KKY5BgQkLDw&feature=youtu.be
Dr Judy Wilyman’s PhD

Vaccines are not tested by the same stringent safety standards as pharmaceutical drugs. They are in a different category. This needs to change.

Professor Peter McIntyre, Director of the National Centre for Immunisation Research and Surveillance (NCIRS) at Westmead Children’s Hospital, announced recently:
“It is a bit of a myth that there are these terrible disease risks that other children, who are in the childcare, would be exposed to from an un-immunised child.” (6)

VACCINE INJURIES ARE REAL – AND BEING IGNORED IN AUSTRALIA

Australian parents are constantly being told vaccines are safe. Yet in the US the government has established The Vaccine Adverse Events Reporting System (VAERS). This has over half a million injury reports in it and the data is readily accessible to the public. The US also has The National Vaccine Injury Compensation Program (VICP). This has paid out over 3.5 billion dollars for vaccine damage (6). It has even paid out for autism!
Family to receive $ 1.5 + million in first-ever vaccine-autism court award – CBS News.
https://www.cbsnews.com/news/family-to-receive-15m-plus-in-first-ever-vaccine-autism-court-award/

Australia does not have a Vaccine Compensation Scheme.

In Australia, the Therapeutic Goods Administration (TGA) is the ‘regulator’ of vaccine products. The TGA is funded by industry, so there is a conflict of interest. Also, consider that vaccines are a growth area for the pharmaceutical companies – according to a recent report the global vaccines market is expected to reach USD 48.03 Billion by 2021 from USD 32.24 Billion in 2016.
(7)

THERE IS NO PUBLIC HEALTH CRISIS OCCURING WITH NSW CHILDREN

However, there is constant lobbying by the pharmaceutical industry through every level of the Australian Government and the media. (8) (Government-mandated over-vaccination in Australia document attached.) There are conflicts of interest with the vaccine industry on all government immunisation committees and boards. Not to mention with prominent politicians, political parties and public health officials.

Dramatic claims from the media and politicians that there will be thousands of deaths from childhood infectious diseases, like measles, if all children are not vaccinated, are simply not true. The graph attached, from Australian Bureau of Statistics data, shows this clearly.

The same decline was seen in all first world countries worldwide. Improved living standards and sanitation have always been accepted as the cause of this decline.
“Infectious deaths fell before widespread vaccination was implemented.” Professor Fiona Stanley, Child Health Since Federation, 2001.

SERIOUS CONCERNS FROM THE ABORIGINAL COMMUNITY

The Forced medical intervention of the No Jab No Pay/Play legislation is yet another intervention that will have disastrous effects on Aboriginal health resulting in another genocide for our people. This includes Aboriginal people with immunocompromised systems, genetic predispositions (MTHFR genes) and poor nutritional status.

There is no follow-up after injections, no long-term independent studies and no accurate records kept. This has resulted in some children in remote areas being vaccinated up to 20 times for the same antigen. See 2015 Hansard senate inquiry link below and attached statement. Comments by Marelle Burnum Burnum and Uncle Max Dulumunmun Harrison.
http://www.aph.gov.au/Parliamentary_Business/Committees/Senate/Community_Affairs/No_Jab_No_Pay/Public_Hearings

THERE ARE NOW ALMOST NO MEDICAL EXEMPTIONS! THIS IS A DISGRACE!

Medical exemptions for vaccines have been severely reduced to: anaphylaxis to specific vaccines, prior immunity and immunosuppressive therapy (see the attached current Medicare exemption form.) This is of grave concern to many parents and medical professionals. The previous exemptions that existed prior to 2016 need to be reinstated (see attached Medicare form used to the end of 2015).

The previous medical exemptions included unstable neurological disease, encephalopathy within 7 days after a previous vaccine and allergy to preservation or antibiotic contained in the vaccine. Medical professionals can testify to these and further medical exemptions that are needed, including genetic disorders, and others – all well-recognised as vaccine exemptions in other countries.

SWEDEN BANS MANDATORY VACCINATIONS! AUSTRALIAN POLITICIANS PLEASE LISTEN!
Sweden has recently rejected the adoption of coercive and mandatory vaccination policies because of the known health risks of vaccines and also because of the influence of the pharmaceutical companies in marketing their own research to the public and politicians.
http://www.activistpost.com/2017/05/forced-vaccinations-violate-constitutional-rights-swedens-parliament-declares.html

Finally, the proposed amendments to the NSW Public Health Act take away the RIGHTS of parents to decide what will enter the bodies of their children. The amendments remove the provisions of ‘informed consent’ and enforce compulsory vaccination through financial and social coercion. This sets a very dangerous precedent for our future, particularly when the current vaccine schedule is highly influenced by politics, politicians and by the pharmaceutical industry.