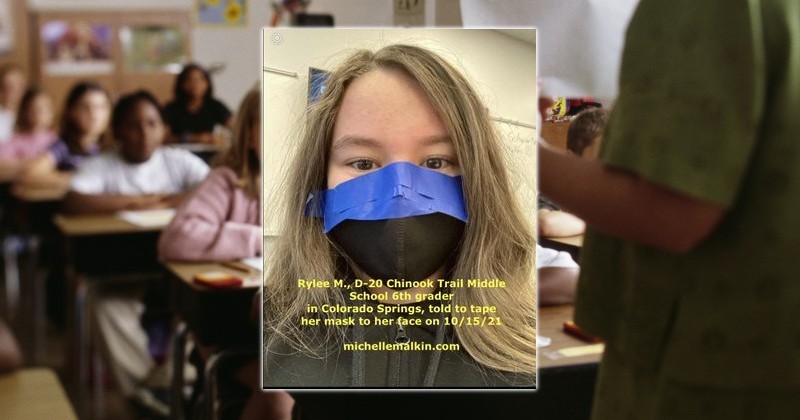 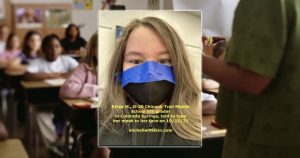 Teachers at a Colorado Springs middle school forced children to tape masks to their face in what is being described as an act of “child abuse.”

Conservative commentator Michelle Malkin highlighted the case of 6th grader Rylee M., who texted her mother to tell her that a teacher had given her a warning then handed her blue painter’s tape to seal the mask to her face.

According to Rylee, at least one other student was forced to perform the same humiliating and potentially dangerous procedure because the teacher insisted their masks were not being worn “properly.” Rylee’s mother asserted that forcing kids to muzzle themselves in increasingly uncomfortable ways could cause long term psychological damage.

“It’s developing some sort of mentality in our children where that kind of restraint over your face [is normal],” she said. “Your face is you, that is how people know you, they are just doubling down on hiding you and not letting you breathe, and it just conformity to the extreme.”

Another parent, Tori Skeldum, backed up her claims.

“[My daughter] said the teachers were wearing the masking tape around their wrists like bracelets and whenever someone’s mask would fall down they would tape them,” Skeldum said. “It’s sad that our world is coming to this and teachers would think it is ok.”

Officials at the Chinook Trail Middle School are now conducting an “internal investigation” into the incident.

As we previously highlighted, a study found that mean IQ scores of young children born during the pandemic have tumbled by as much as 22 points while verbal, motor and cognitive performance have all suffered as a result of lockdown and mask mandates.