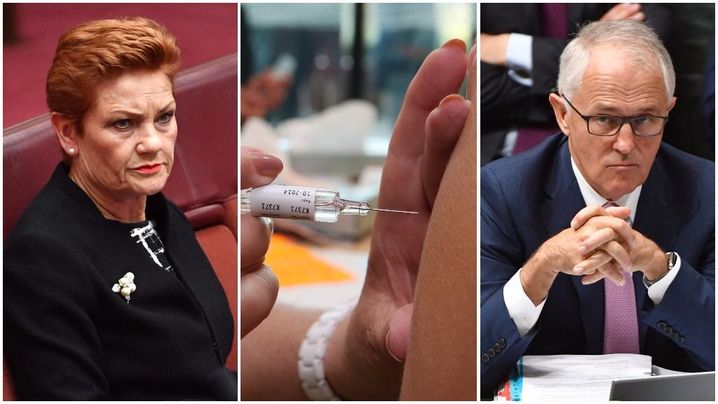 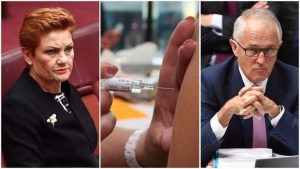 NOTE: Terrible Turnbull Has Slammed Pauline Hanson Over Her Totally Accurate Comments In Regards To The No Jab Propaganda & Fear Campaign. Why Has Poor Old Malcolm Got His Knickers In A Knot Over Pauline’s Comments About Blackmailing Parents Into Vaccinating? Let’s Take A Look.

The PM has responded to Senator Hanson’s claims the government is blackmailing parents into vaccinating their children. (AAP)

Malcolm Turnbull has shot down Pauline Hanson’s assertion the government is blackmailing parents into vaccinating their children.

The prime minister says it’s vital to the health of all Australians that close to the whole population be immunised.

“It is a vital health objective to ensure that everybody is vaccinated.”

Earlier, One Nation leader Senator Hanson questioned the effectiveness of vaccinations, urging parents to do their own research.

“If this having vaccinations and having measles vaccinations is actually going to stop these diseases, fine, no problems,” she told ABC TV.

Health Minister Greg Hunt told AAP: “The clear and categorical advice from experts including the Chief Medical Officer, based on decades of research and evidence, is that vaccinations save lives.”

Senator Hanson said the government was “blackmailing” people – a reference to the policy of withholding childcare fee rebates and welfare payments from parents who don’t have their children fully immunised.

“Don’t do that to people. That’s a dictatorship,” she said.

“I hear from so many parents, where are their rights?”

Mr Turnbull and Mr Hunt both highlighted the success of the “no jab no pay” policy, saying it had led to an extra 200,000 children being vaccinated over the past year.

“They aren’t just wrong – they are dangerous,” she wrote on Twitter.

“Vaccination (is) the most effective public health measure ever,” the pediatric neurosurgeon wrote on Twitter.

Senator Hanson’s advice was “uninformed, dangerous and insulting” and it was disgraceful that an Australian politician could endanger children like that, he said.