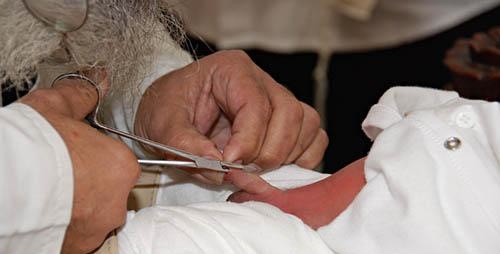 “How lovely he appears! his little cheeks / In their pure incarnation, vying with / The rose leaves strewn beneath them.” —Lord Byron

There exists a Holy Grail in the cosmetic industry to create a cream that sheds years off your skin. Scientists have discovered such a ingredient, fibroblast cells. Fibroblasts cause the skin to regrow the elasticity and elegance of youth for whoever uses a fibroblast-based cream. What is the best source for these wonder cells? Baby foreskins.

In the movie Fight Club, when Tyler Durden talks about his infamous soap made from human fat, he wasn’t making stuff up. While Tyler Durden is himself a fictional character, human fat soap is real. But making human blubber into soap isn’t where the cosmetic companies stop. No, there is a secret precursor to a lotion that guarantees youthful-looking skin. This Holy Grail for skin creams is one that recreates the smooth, wrinkle-free skin that so many lust after. And 50 percent of the population has what the cosmetic companies need. It’s not fat, but it’s another body part that some of us just want to get rid of right away: the foreskin. That’s right, the tip of the penis that is cut off in religious ceremonies throughout the world is really a fountain of youth, and actually one of the best sources of fibroblasts.

Fibroblasts are what cosmetic companies have been looking for all these years. They are the key to growing new skin and are therefore widely used for skin grafts, pasting skin transplants over sores, and other skin conditions, which makes them great for cosmetic applications. One baby foreskin can be stretched to grow almost $100,000 worth of fibroblasts.

Big names are coming out to get behind these products, including the biggest name of all, Oprah. Oprah famously endorsed one company’s lotion on her show and website as a miracle cream. The company, called SkinMedica, saw soaring profit and this prompted anti-circumcision groups to follow her around and protest her use and promotion of foreskin cream. Granted, SkinMedica’s lotion uses the cells from one original baby foreskin harvested years ago, but just think about it: With Oprah’s plug, millions of women around the world are smearing cream from the foreskin of one guy all over their faces.

SkinMedica isn’t the only company in the game. A company called Vavelta is selling fibroblast injections that help create “skin-firming protein called collagen, which becomes increasingly scarce with age.” Vavelta hopes to supersede the billion-dollar Botox industry by using a needle-based injection system of their own that involves getting 20 million fibroblast foreskin cells under the user’s skin. Even if the source of fibroblasts is a little odd, their competition is injecting toxin that can cause life-threatening botulism and makes its users look perpetually surprised, so take your pick.

Show Me The Proof

A Cut above the Rest?: Wrinkle Treatment Uses Babies’ Foreskins
Is Oprah Supporting the Harvest of Baby Foreskin?
Human Foreskins are Big Business for Cosmetics