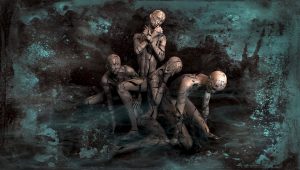 ANY person who exits an “officially designated victim-group”…and then succeeds in life on his own…and then goes one step further and refuses to identify his entire existence with his former group…but instead stands as a unique individual…why, that person, at the very least, must be a criminal, if not a terrorist, right?

That’s the crux of the issue: never leave your group.

That’s how society, civilization, and culture are promoted these days.

“Groups have needs, agendas, and problems, and the solution will come from government.” That’s the all-embracing formula.

The fake appearance is: victim groups are fighting for recognition and special status, and the government is pushing back—but that’s now a ruse. That’s a cover story. In fact, victim groups and government have the same goal: a relationship based on dependence. One side depends and the other side gives and protects.

The individual is out of the equation. He is portrayed as the greed-obsessed reason these victim groups exist and need help in the first place.

Banks, Wall Street, and mega-corporations are depicted as the end result of individualism.

In fact, government, banks, Wall Street, and mega-corporations are joined at the hip. They brush each other’s teeth first thing every morning.

Political correctness and the burgeoning movement to outlaw “offensive language” are merely tactics to: preserve groups’ separate identities; foment conflict between them; and ultimately foster their dependence on government authority.

The truth is, you can’t get free individuals to depend on government. Only “besieged groups” can be relied on for that purpose.

In the State’s eyes, a perfect society would be composed of groups who have entirely forgotten the concept of the individual, as if it never existed.

For example, Peter Collero, of the department of sociology, Western Oregon University, has written a book titled: The Myth of Individualism: How Social Forces Shape Our Lives:

“Most people today believe that an individual is a person with an independent and distinct identification. This, however, is a myth.”

When Callero writes “identification,” he isn’t talking about ID cards and Social Security numbers. He’s asserting an absence of any uniqueness from person to person. He’s claiming there is no significant distinction between any two people. There aren’t two individuals to begin with. They’re a group.

This downgrading of the individual human spirit is far from accidental. It’s launched as a sustained propaganda campaign, the ultimate purpose of which is top-down control over billions of people organized into groups.

Here are several remarks, meant to defame the individual, from people I would call high-IQ idiots (at best):

“The cold truth is that the individualist creed of everybody for himself and the devil take the hindmost is principally responsible for the distress in which Western civilization finds itself — with investment racketeering at one end and labor racketeering at the other. Whatever merits the [individualist] creed may have had in the days of primitive agriculture and industry, it is not applicable in an age of technology, science, and rationalized economy. Once useful, it has become a danger to society.” (Charles Beard, 1931)

Beard, a celebrated historian, sees no difference between individual racketeering and the individual freely choosing and living his own life. In making this judgment, he becomes an intellectual/propaganda racketeer of the highest order.

“British empiricist philosophy is individualist. And it is of course clear that if the only criterion of true and false which a man accepts is that man’s, then he has no base for social agreement. The question of how man ought to behave is a social question, which always involves several people; and if he accepts no evidence and no judgment except his own, he has no tools with which to frame an answer.” (Jacob Bronowski, Science and Human Values, 1956).

Bronowski is quite sure that hearing other people’s evidence and then keeping one’s own counsel is wrong. One has to accept that evidence on its face. This is sheer idiocy. Individuals are capable of deciding, on their own, what social agreements to enter into.

The State and its allies are real oppressors who contribute mightily to creating real victims; but what I’m talking about here is growing numbers of people who voluntarily take on the victim-mantle and seek comfort in nests of self-promoting groups who exaggerate and distort their own claims to special status.

Bernays understood that the basis of successful propaganda is a mass audience, an audience composed of groups, not individuals.

When a group assigns itself solid “victim-status,” it creates one basic rule: a member must not leave the group. Why? Because if he does, he’s claiming he is no longer a victim—and that assertion is a betrayal.

Nice and neat. A prison.

“You’re crazy. There is no such thing. Now get back in the group where you belong.”

Down at the root, betrayal begins as self-betrayal. The individual gives up the ghost. From that point on, his politics don’t matter. He forgets what he could have been. He defines himself by race and religion and country and rank ideology and group. He finds words and feeling through which he can express his role in a stage play that decays him from the inside out.

Eventually, if lunatics have their way, every person on planet Earth will be designated a victim. That will be the group of groups.

It won’t matter why and how everyone supposedly turns out to be a victim. The reasons will be forgotten. People will “instinctively” sign on to the agenda.

And the management team running the world will put another check mark on their sheet of objectives:

“Earth is beginning to resemble one giant hospital/mental institution. Break out the champagne.”

There is only one problem. That plan is fraying at the edges. People are waking up and swimming to the surface through layers of deception. They’re returning to themselves. They’re recognizing group-ism for what it is: a meltdown into self-sabotage.

The artifact is the collective. The self is real.

They may hide, but they can be resurrected.

Then the whole fake game crumbles.

3 thoughts on “The “dependent victim” psyop”