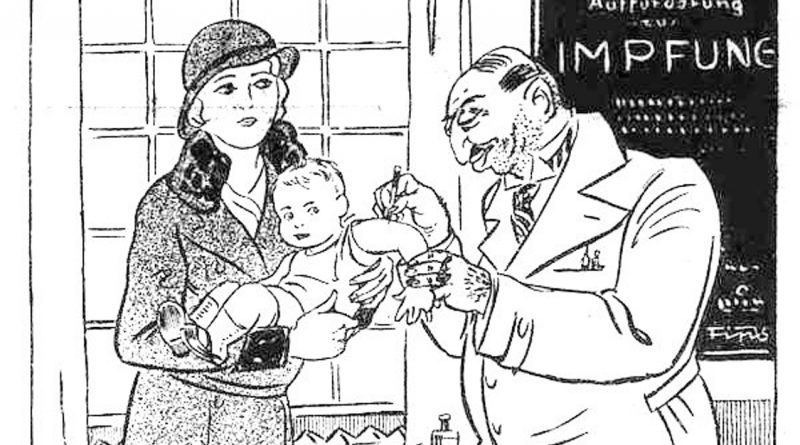 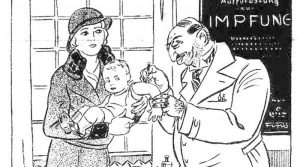 Background: One of Julius Streicher’s publishing house sections was a “medical journal” titled Deutsche Volksgesundheit aus Blut und Boden! (German People’s Health through Blood and Soil!). It was a combination of healthy anti-Semitism, medical information, and natural healing. In this article by Karl Holz, Streicher’s second-in-command, the appropriate anti-Semitic arguments are repeated. The periodical had a short life. It was published from 1933 to 1935, in part stating that vaccination was part of the jewish plot getting in the way of public health.

The jew and Healing

The Talmud forbids jews to heal Gentiles. Instead, they must murder them!

“The jew is not a German, but rather a deceiver. He is not a citizen, but rather a butcher.” So wrote Dr. Martin Luther four hundred years ago about that foreign race of the jews. He would write no differently today. The jew has remained a deceiver and a butcher until the present day. He has remained so in every area of life. Also in the healing arts. Behind the mask of a “friend of humanity,” he understood how to sneak among the German people as a doctor, as a bringer of health. He also found a place in medical science. In the past, no position, no office could be kept free of the plague of the jewish spirit. Thus the following unbelievable figures came to pass in the Berlin medical profession in 1928:

The Talmud, that secret jewish law book, provides sufficient information about that. It sees only jews as human beings. Gentiles are seen as animals. (Baba mezia 144a and b). Their lives and property belong to the jews. (Ikkarim III 25). Jews are permitted to kill Gentiles, and they are forbidden to show them any kind of mercy. (Holchoth abodah sarah 1).

Whoever keeps these laws in mind is shocked at the blindness and lack of responsibility of those who allowed the emancipation of the jews. And allowed this people to practice health care. A people whose laws permit and approve the murder of Gentiles.

The jew has never had the desire to heal Gentiles. His goal is to ruin their health. The “Jewish Letter of Toledo,” a jewish document from 1489, says this openly. In that year, the jews in Northern France were given the choice of emigrating or being baptized. The rabbi of Arles asked the secret jewish supreme leadership in Constantinople for advice. It answered:

We have received your letter, in which you report the hardships and misfortunes that you must suffer… The Great Council and the rabbis give you the following advice:

You report that the King of France wants to force you to become Christian:

“Join the church, but hold the Law of Moses in your hearts.”

You report that you are forced to give up your property: Train your children to become merchants so that you may gradually rob the Christians of their possessions.

You report that your lives are in danger: “Let your children become doctors and apothecaries, so that they will be able to take the lives of the Christians…”

The Prince of the Jews of Constantinople, 21 Kislew 1489

The jew did what this letter commanded. And not only in France. His children became apothecaries and doctors everywhere in the world “so that they could take the lives of christians.” To those not still convinced by this jewish letter, we turn to the law in the Schulchan aruch, which states the matter as clearly as one could wish. As confirmed during the Stürmer Talmud trial in 1931, Jore de’ a 158,1 states:

“One should not directly kill those Gentiles with whom we are not at war. It is, however, forbidden to save them when they are near death…. Therefore, one should not heal them, even for money… It is also permitted to test a medicine (medical poison) on Gentiles to see if it is beneficial or harmful.”

Everything is now clear. Now Gentiles know why the jew enters the health professions. Why he fills it with members of his race. Why he fills influential positions with jews. The healing arts are to be led astray, they are to be corrupted.

The jew does not want healthy, happy German people. He wants these people to sicken and die. His hate commands that. The Talmud orders it.

The German people, however, want to recover from sickness and an unnatural existence. It wants to build new strength from blood and soil. It wants to march healthy and strong into a great future. Above all, the German people must do one thing. It must ensure that the jew and the jewish spirit vanish forever from the German health system.