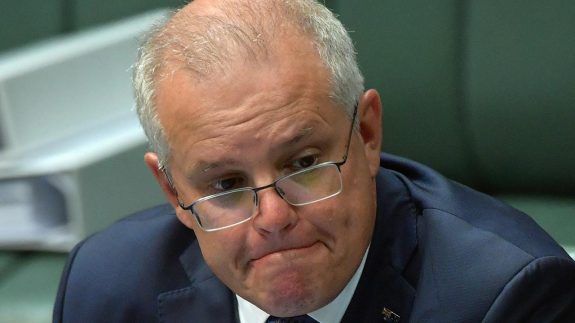 Image from The Australian

The Morrison government is a sewer

The victim took her own life in June 2020. NSW police have confirmed that a criminal investigation into the allegation dies with the victim.

Despite their knowledge that police will not investigate because the complainant is dead, government ministers and some journalists continue to claim that the matter must be left to the police.

All of them are wrong, according to police.

Morrison said that he has referred the allegations to police.

Simon Birmingham, Minister for Trade, Tourism and Investment, yesterday said the accused minister will not be stood aside, and that the matter should be left to police.

(It is puzzling that Birmingham is commenting on this. It would seem to be more appropriately the job of senior lawmaker Attorney-General Christian Porter, who has thus far remained silent.)

On ABC Insiders program this morning, Australian Financial Review journalist Phil Coorey repeated the government line. “This is for the coppers,” he stated, “and it should be for the coppers first and foremost.”

This seems at first blush to be wilful ignorance, gross carelessness, the peddling of misinformation, or an attempt to yet again create and control a narrative that best favours the government.

The accused minister has not come forward to defend himself against the allegations. It is not credible that anyone who is innocent would want to continue public life with accusations such as these left unaddressed, and yet, that appears to be the case.

It is also only a matter of time until the suspect is named. There appears to be no legal requirement to suppress his name, particularly as there will be no trial. He can also be named under parliamentary privilege. It is undoubtedly in the public interest for his name to be released, and were he anyone other than a Liberal cabinet minister, he would not probably not be protected by anonymity. Footballers, for example, are stood aside while allegations of sexual assault are investigated, and they are named. Not so much cabinet ministers, it appears.

It is also remarkable that the accused minister appears to be happy for his cabinet colleagues to be tainted by the rape allegations. As long as we do not know who the minister is, there are around sixteen possibilities in the cabinet. Every time a cabinet minister opens his mouth we can legitimately ask, are you the alleged child rapist? This can’t help but have a destabilising effect on the government, as its already tenuous legitimacy is further eroded by the presence of an anonymous alleged rapist in its highest ranks.

Then there is the question of national security, a subject close to the hearts of both Morrison, and Home Affairs Minister Peter Dutton, also a cabinet member. In 2017 when Malcolm Turnbull was Prime Minister, he had occasion to warn Christian Porter, prior to making him Attorney-General, that his drinking and his behaviours towards young women were leaving him open to the possibility of compromise, making him a security risk:

“…it is just not acceptable. And he knew that I was considering appointing him attorney general, which of course is the first law officer of the crown, and has a seat on the national security committee, so the risk of compromise is very, very real.”

Indeed, everyone in the cabinet who is aware of and concealing the alleged rapist’s identity is a security risk, and vulnerable to exploitation.

Is this government even tenable while this matter is “left to the coppers?”

The hideous situation has come to light just days after the government spectacularly failed to cope with the alleged rape of media advisor, Brittany Higgins, in Parliament House just metres from the Prime Minister’s office.

Ms Higgins was left unconscious and half naked by her attacker on Defence Minister Linda Reynolds’ couch. This could have cost Ms Higgins her life, as she was inebriated and unable to care for herself. Security guards “checked on” Ms Higgins through the night, but nobody called for medical assistance. At least thirty people, including ministers, the Speaker of the House, the President of the Senate and the Prime Minister’s Office most senior staff knew about this “serious incident,” and none of them informed the Prime Minister until two years later.

The Morrison government is a sewer. It is steeped in allegations of rape and sexual assault of the most serious and sickening kind. It is almost certain that Morrison will attempt to brazen out this latest allegation. He will not stand the minister aside, and he will continue to contend that it is a matter for police, in full knowledge that the police cannot pursue criminal charges.

The minister will not be investigated by police. He will not be exonerated. His name will not be cleared. Suspicion will linger over the heads of all male cabinet members, including Scott Morrison, Christian Porter and Peter Dutton.

While we know not all cabinet ministers are alleged child rapists, we do not know which one is. The Prime Minister is doing everything possible to conceal that knowledge from us.

How good is that?

This article was originally published on No Place For Sheep.