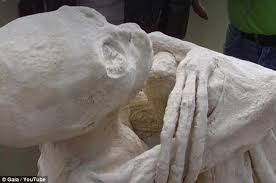 throughout the years there have been many claims of profound discoveries. The most recent is the mysterious bodies in Peru. Bodies with only three fingers and three toes. However, can we believe what we are told?, what we read or find on the internet?

The only way to know, is to travel thousands of miles, talk with those involved, conduct examinations and test for DNA results. Whatever you may think, whatever your belief…

THIS SERIES WILL DELIVER THE ‘WHOLE TRUTH’.

NOW AVAILABLE TO WATCH FOR A LIMITED TIME ONLY:

This new discovery could be the greatest discovery of all time. The remarkable ancient mummified body, dubbed Maria, has three fingers on each hand, it was discovered in Nazca, Peru. While mummies can excite historians, this particular find may alter the story of human origins. After discovering more mummies in Peru some members of the team claimed that it didn’t look human.

The tests indicate that the body is likely from AD 245 to 410 – over 1,600 years old, according to the scientists. The mystery remains and we look forward to learn more about these mummified remains. Are we looking at a long lost ancient civilization? Are we looking at the remains of the ‘Gods’ that according to many ancient texts descended from the heavens in the distant past? Are we looking at a Alien species that existed on Earth long before humans came into existence?

Steve Mera has been involved in the investigation and research of the UFO phenomena for over 31 years and whilst with the British UFO Research Association as a Regional Investigative Coordinator and tutor of the BUFORA UFO course, Steve took over the running of the Manchester based group MAPIT which was established in 1974. Steve is also the Chief Editor of Phenomena Magazine, the most recognised E-Zine of its kind.