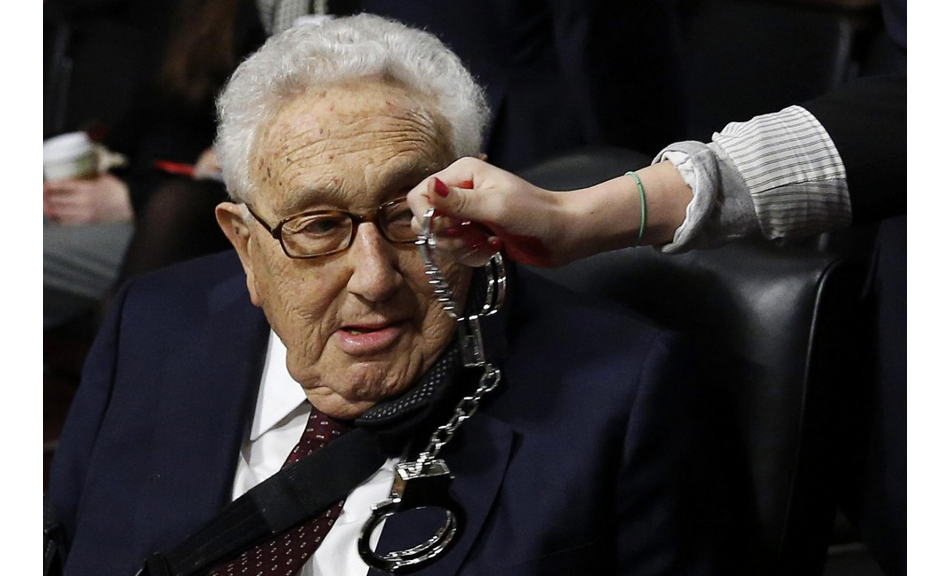 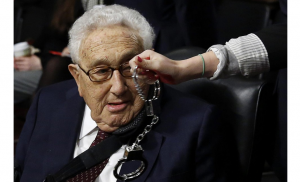 It’s a sick sad joke coming from the Nobel Peace Prize (for nothing) president who is bombing … wait, how many countries is Obama currently bombing again? Seven? Is anybody even keeping track anymore?

Here’s everyone’s favorite humanitarian Henry Kissinger shaking hands with defense secretary Ash Carter at a special ceremony at the Pentagon two days ago where the good doctor got the highest award the Department of Defense can possibly bestow upon a civilian: a Distinguished Public Service Award. 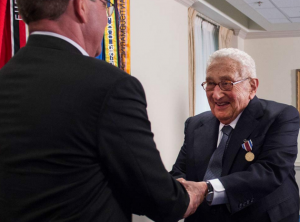 Carter himself deserves an award for understatement, calling the man who is responsible, directly or indirectly, for the deaths of millions of people in Southeast Asia, East Timor, Bangladesh, and southern Africa, among other places—”unique in the annals of American diplomacy.” Kissinger, Carter said, “demonstrated how serious thinking and perspective can deliver solutions to seemingly intractable problems.” As to allegations of war crimes, “the fact is,” said Kissinger, he and Richard Nixon “were engaged in good causes.”

“Good causes”…? In what nightmare is what Kissinger did “good”?

He’s been implicated in some 4 million deaths for genocides in three different countries (at least).

Of course the White House should be honoring Kissinger, since it runs its endless war by Kissinger’s rules. The right to bomb neutral countries the United States isn’t at war with in the name of national security is now unquestionably accepted across the foreign policy spectrum, as is the right of the White House to engage in extrajudicial assassination at will (Kissinger’s illegal Cambodia bombing set a precedent, but he also lent critical legitimacy by supporting Reagan’s bombing of Libya, George H.W. Bush’s invasion of Panama and Gulf War I, and George W. Bush’s Gulf War II).

And apparently that, in the Pentagon’s eyes, is what constitutes a “pubic service”… murder.

Guess that’s what DoD awards are for, ultimately. So is it the more people murdered, the bigger the award?

In that context, it makes sense Kissinger got the highest, most “distinguished” award they could possibly give him.

Melissa Dykes is a writer, researcher, and analyst for The Daily Sheeple and a co-creator of Truthstream Media with Aaron Dykes, a site that offers teleprompter-free, unscripted analysis of The Matrix we find ourselves living in. Melissa also co-founded Nutritional Anarchy with Daisy Luther of The Organic Prepper, a site focused on resistance through food self-sufficiency. Wake the flock up!