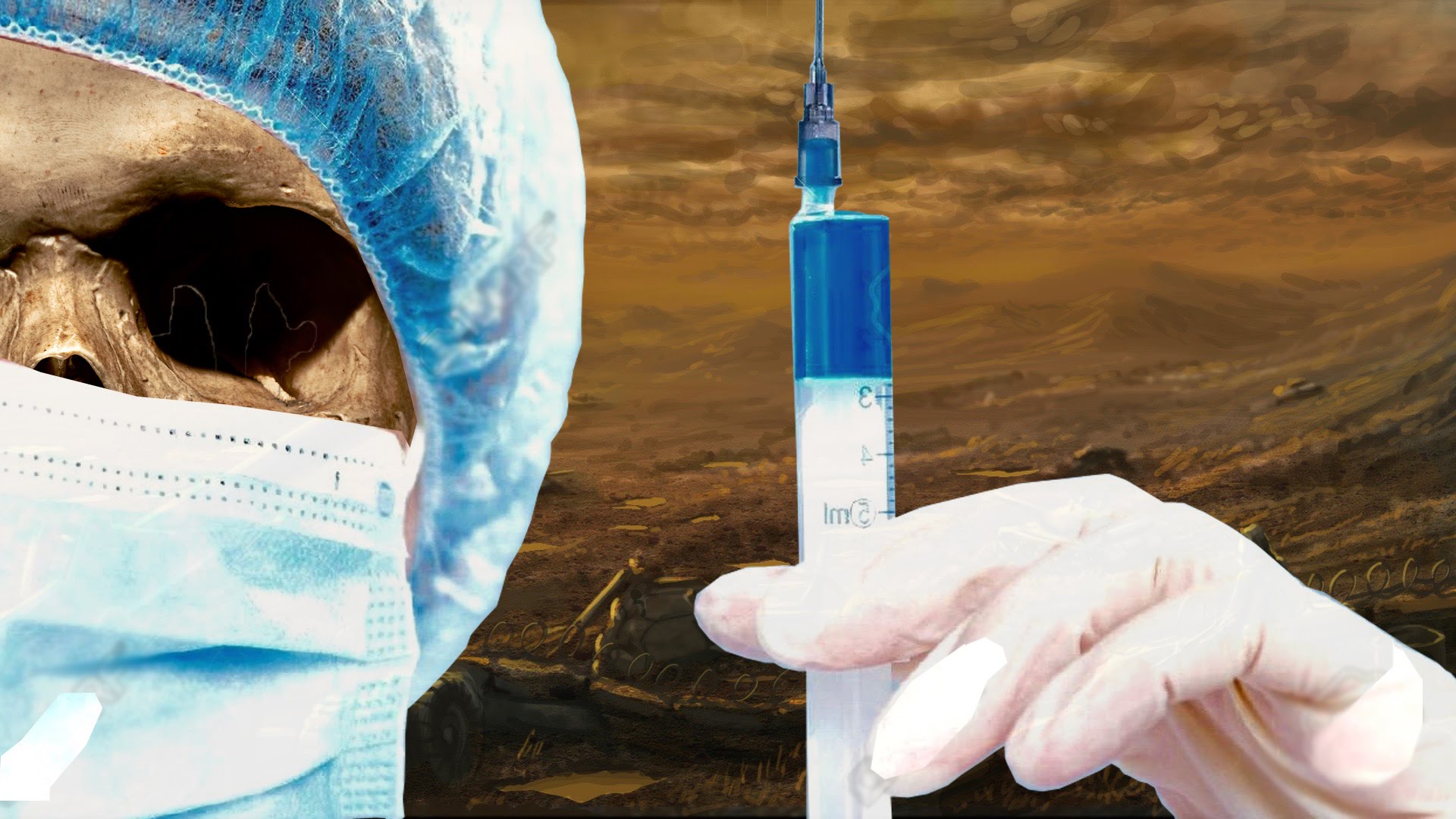 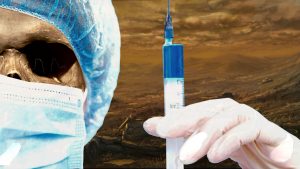 We’ve all now heard of the ‘Spanish Flu’ but why is it so popular right now especially with the ‘producers’ (Gates) and players in their 2020 theatrical masterpiece, Covid19? Lets see…….

“The Spanish flu pandemic of 1918 actually originated at Fort Riley, Kansas where soldiers reported to the Army’s largest training facility during World War I […]. The soldiers who were [DELIBERATELY] infected with the H1N1 influenza virus then served as countless vectors of dissemination for the pandemic that ultimately killed as many as 100 million people worldwide. That single US-executed biowarfare operation against humanity was arguably the deadliest depopulation event in human history.” Article Was the 2020 Wuhan Coronavirus an Engineered Biological Attack on China by America for Geopolitical Advantage?, presented by the alternative news outlet The Unz Review, Metallicman, 27. January 2020, citing: Article Spanish Flu of 1918 Was Really a Bioterror Attack on Humanity, presented by the Algora Blog, 6. February 2020

We’ve oft heard from some ‘truthers’ that the plandemic of 2020 was a bio-weapon attack but the lack of proof of an actual virus (as in the H1N1 above or the SarsCov2 today) or of it’s transmission makes it highly doubtful. Also if these scientists could come up with the bio-weapon they would also presumably hold the antidote. It would increase belief in their know-how and they would be holding all the cards which is what they need us to believe. I do not believe they are capable of either. The obvious answer is it was simply poisonous chemicals injected using the smokescreen of ‘vaccines’. The ‘vectors’ mentioned above would be referring to vaccine ‘shedding’ (an admitted by-product mentioned in some inserts) and not a contagious viral transmission. Chemical poisons have been known to pass from one close contact to another for years hence the need for hygiene in some workplaces. An excerpt from the book Diseases of occupation and vocational hygiene ”4

They had proof that poisoning can be passed from one person to another without any supposed invisible virus. It should also be noted that mercury was and still is an ingredient in vaccines whatever new fancy name they like to stick it under.

In the book, Vaccination Condemned, by Eleanor McBean, PhD, N.D., the author describes, in detail, personal and family experiences during the 1918 “Spanish Flu” pandemic.

McBean’s coverage of the 1918 “Spanish Flu”, as a reporter and an unvaccinated survivor, requires that the historical basis of the event needs to be revisited, not as a “conspiracy theory” but with evidence that will “set your hair on fire”.

”Only the vaccinated died”

A few years ago, I came across another book by Eleanor McBean: “Vaccination…The Silent Killer”. McBean provides evidence that not only were the historical events of the 1918 “Spanish Flu” compromised, but also those of the Polio and Swine Flu epidemics.

“There are still many unanswered questions on the causes of the 1918 Spanish flu epidemic, and on the role of viruses in post-WWII polio (DDT neurotoxicity?). These modern epidemics should have opened our minds to more critical analyses. Pasteur and Koch had constructed an understanding of infection applicable to several bacterial diseases. But this was before the first viruses were actually discovered. Transposing the principles of bacterial infections to viruses was, of course, very tempting but should not have been done without giving parallel attention to the innumerable risk factors in our toxic environment; to the toxicity of many drugs, and to some nutritional deficiencies. Cancer research had similar problems.”

According to traditional conceptions, an infectious disease begins in one place and spreads out from there, depending on the environmental conditions, in certain directions. Such a development didn’t occur with the Spanish flu.

”In 1918, there were two different disease waves: a lighter one in spring and a much more severe wave, which claimed many lives, in late summer and autumn. Here, experts can’t even agree whether the disease was introduced to the United States from Europe, or the other way around. According to one source, the epidemic began in February 1918 in the Spanish town of San Sebastian, close to the French border on the Atlantic coast. But another source names the same outbreak date, but a completely different place thousands of kilometers away from San Sebastian, on the other side of the Atlantic: New York City. That these outbreaks happened at the same time cannot be explained by either ship route or migrating bird patterns.

Then in March 1918, there were reports of cases in two army camps in Kansas, hundreds of kilometers away from New York. In April, the Spanish flu appeared in Paris for the first time, in May in Madrid, until it reached its peak in Spain at the end of May. In June, cases first began accumulating in war-torn Germany, but simultaneously in China, Japan, England and Norway as well. On 1 July, Leipzig had its first case. And over the course of that month, approximately half a million Germans were affected.” 2

The fledgling pharmaceutical industry, sponsored by the ‘Rockefeller Institute for Medical Research’, had something they never had before – a large supply of human test subjects. Supplied by the U.S. military’s first draft, the test pool of subjects ballooned to over 6 million men.

Between January 21st and June 4th of 1918, Dr. Gates (coincidence or a relative?) reports on an experiment where soldiers were given 3 doses of a bacterial meningitis vaccine.  Those conducting the experiment on the soldiers were just spitballing dosages of a vaccine serum made in horses.

A total of 1,090 men were not there for the 3rd dose.  What happened to these soldiers? Were they shipped East by train from Kansas to board a ship to Europe?  Were they in the Fort Riley hospital? Dr. Gates’ report doesn’t tell us.5

“The pandemic, one of the worst to ever afflict the earth, was simply virtually erased from newspapers, magazines, books and society’s collective memory,” says Kolata. This could be psychologically explained in two ways. The catastrophe presented a very personal catastrophe for physicians, because, although they were basically given all the money and material resources in their world to fight the alleged flu, they were unsuccessful in preventing the disaster. In a brutally clear way, doctors and pharmacologists were shown the limits of their power. It is clear that mainstream medicine prefers not to dwell on such a total defeat, let alone expand upon it in memoirs or newspapers.”6

Restoring Faith in WHO?

Today we have dancing nurses, whistle blower doctors and scientists with a supposed chip on their shoulder. I wonder sometimes if this whole thing is a kind of reality advertizing campaign for modern medicine which, let’s face it, has been having an uphill battle with ‘alternatives’ as more and more people lose faith. Then this woman spurted out these words in ‘Plandemic the Movie’…..

The woman is Judy Micovits and she worked alongside Dr Fauci in the 80’s on the HIV/AIDS pandemic that never was. She makes out she is a whistle-blower but she has never blown the whistle on the fact that they never did find that elusive human papiloma virus, yes HIV. She is only ‘whistle-blowing’ very selectively and the two quotes above were taken directly from her own film made for ‘truther tv’ this year. Why would she want to ‘restore faith’ in medicine? If she is their poster child I’d wonder at the thoughts of their advertising agency and what cool-aid they were drinking. Listening to her rattle on is akin to your worst chemistry teacher scratching the blackboard.

“In 1997, a paper by Jeffery Taubenberger’s research team appeared in Science, claiming to have isolated an influenza virus (H1N1) from a victim of the 1918 pandemic. “But before one can be certain that a pandemic virus had in fact been detected, some important questions must be asked,” writes Canadian biologist David Crowe, who analyzed the paper. The researchers had taken genetic material from the preserved lung tissue of a victim-a soldier, who died in 1918. Lung diseases were extremely typical of the Spanish flu, but it is a big leap to conclude that the many other million victims also died from the same cause. And particularly “the same virus” as Crowe points out.”2

In 1918 they also carried out numerous experiments to prove the flu was being transmitted person to person. Look at Milton J Rosenau MD and Boston Medical Association’s 1919 experimental study on the Spanish Flu not being a transmittable virus by prolonged physical contact, casual contact or even injection of infected fluids from the sick to healthy….

”The experiment began with 100 volunteers from the Navy who had no history of influenza. Rosenau was the first to report on the experiments conducted at Gallops Island in November and December 1918. His first volunteers received first one strain and then several strains of Pfeiffer bacillus by spray and swab into their noses and throats and then into their eyes.

When that procedure failed to produce disease, others were inoculated with mixtures of other organisms isolated from the throats and noses of influenza patients. Next, some volunteers received injections of blood from influenza patients.

Finally, 13 of the volunteers were taken into an influenza ward and exposed to 10 influenza patients each. Each volunteer was to shake hands with each patient, to talk with him at close range, and to permit him to cough directly into his face.

None of the volunteers in these experiments developed influenza. Rosenau was clearly puzzled, and he cautioned against drawing conclusions from negative results. He ended his article in JAMA with a telling acknowledgement: “We entered the outbreak with a notion that we knew the cause of the disease, and were quite sure we knew how it was transmitted from person to person. Perhaps, if we have learned anything, it is that we are not quite sure what we know about the disease.”3

So the contagion experiments were already done and dusted back then, some more have been done lately but they are kept very quiet as the outcome is never satisfactory to the disease mongering medicine men who need us to trust in their expertise and do as we are told despite any suspicions that all might not be as it seems. What better way to make us run in fear to saviours in white coats than to tell us an invisible ‘virus’/bogeyman is out to get us?

When I started looking into the Spanish flu about 5 years ago or more I could only find ONE youtube video giving this information. I went back to it often for reference but within a year it was deleted along with it’s maker a Swedish? man called Sacha? The info is now getting out there again and it is much needed because someone is using the Spanish Flu ‘episode’ as a blueprint and we all know Bill Gates has a deep fascination for it, but does he know the truth about it or is he another useful idiot who believes in contagion? Simply follow the money.