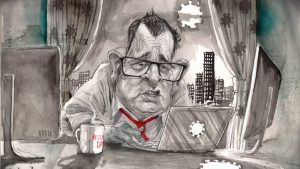 The Victorian government wants to replace temporary state of emergency laws – which need to be passed through parliament to be extended or changed – with new permanent powers.

As predicted, the Orwellian ‘war’ against the ‘invisible enemy’ was never meant to ever end. Rather, the narrative was always designed to morph into a state of indefinite propaganda.

The Victorian government wants to replace state of emergency laws with permanent ‘pandemic laws’, that would allow authorities to enforce lockdowns and quarantine for any future health crises.

This would give the Victorian government powers to impose sweeping rules on its people with a moment’s notice, after millions endured a year of relentless COVID-19 lockdowns:

The Andrews government has become notorious for snap lockdowns, leaving thousands out of work and school, despite other states handling outbreaks with no such draconian orders.

The Victorian government has been able to enforce controversial lockdowns, mandatory mask-wearing and quarantine, because it created a state of emergency declaration in March 2020.

The state of emergency has been extended twice. Now, a set of permanent laws are expected to be passed by December, when the current emergency provisions run out.

The opposition Liberal Party – who said the proposed laws are not transparent enough – do nothave a say in them, because the government will only negotiate with three minor MPs in order to pass.

These are the names willing to throw away the principles of freedom and democracy.

The cross-benchers are understood to be insisting the government prevent what they consider ‘overreaches’, such as the snap lockdown of nine public housing towers in 2020 and expensive fines.

“We would also like to protect disadvantaged members of the community from disproportionate impacts of lockdown, including public housing residents, people of colour and young people from low-income families,” Greens MP Samantha Read said.

You do realise you can achieve this outcome without selling yourself out to tyranny, right?

How about the lockdown measures are abolished completely? Wouldn’t this help the disadvantaged?

More smoke and mirrors from the political circus.

This would require logic to be applied, something that has been missing during this entire saga.

Of course, the real game at play is the opposite of the PR messages. An inverted agenda.

The ‘war’ against the virus is not meant to end — it is meant to be continuous.

A perpetual state of virus propaganda set to influence everyday life for many years to come.

A year ago, the first burst of ‘public health orders’ were something to behold.

Police trawling our streets on the lookout for COVID ‘offenders’ — telling pregnant women to move on from park benches; instructing those catching their breath that they were forbidden from resting.

I personally saw two police officers shout at a few young swimmers to get out of the sea, to ‘protect them’ from the virus. I asked the police what powers they had to prohibit swimmers from diving in the water off the rocks and the police just cited ‘the emergency laws in place’.

This has become the Orwellian state of Australia.

Since then, there have been a plethora of dangerous attacks on our freedoms by politicians and police who cannot wean themselves off pandemic powers.

We predicted in March 2020 that indefinite martial law is the underlying glue that holds the COVID-19 narrative together. The glue that allows it to be enforced and accepted by the sleeping masses.

From the start, it was abundantly clear that this ‘virus’ would become the new-age ‘terrorism’.

The enemy is ‘invisible’, and thus the narrative can continue as long as the script writers see fit.

For with fear, you can control the minds and emotions of millions.

You see, there’s something subtly satisfying – something that feels necessary — in the urgent call for a mass mobilization against a novel communicable disease.

‘We are all in this together!’ has slowly but surely morphed to ‘Let’s all do out part and get the jab!’.

Orwell famously warned that a similar world to the one depicted in his novel could come to pass. More recently, the head of Microsoft also said that ‘1984 could come by 2024‘.

Indeed, everything is textbook Orwellian propaganda.

In the novel, Orwell’s point was much more than just Big Brother and the Thought Police. The story details how people themselves participate, wilfully, in the propaganda that wills their enslavement.

Think of Goldstein. He is the principal enemy of the state, according to the Party). He is depicted as the head of a mysterious dissident organisation. He is only seen and heard on telescreen.

However, this ‘enemy’ was conjured by the Ministry of Truth, the State’s propaganda department.

Like the threat of a fake virus, Goldstein is a fabrication of the state, used as a tool by the Party to stir up emotion in the citizens. Goldstein functions as a threatening, but ill-defined symbol, that the Party uses to keep citizens in line and prevent rebellion.

War rhetoric, like all stilted political language, is tailored “to give an appearance of solidity to pure wind,” as Orwell put it. So it is with the politicians, who are declaring ‘war’ to conquer COVID-19.

“We’re at war with a virus,” Joe Biden said in the U.S. primary debate.

In this metanarrative, the coronavirus is a discrete, external challenge to the entire world, and we must all ‘play our part’ to defeat it. We must all unify in a common cause.

However, we already know how ‘war’ really operates in this Orwellian setting:

Hierarchical society is only possible on the basis of poverty and ignorance. This new version is the past and no different past can ever have existed. In principle the war effort is always planned to keep society on the brink of starvation.

The war is waged by the ruling group against its own subjects and its object is not the victory over either Eurasia or East Asia, but to keep the very structure of society intact.”

The mission of perpetual war in Orwell’s novel is to justify psychological and physical control over their populations, to keep their people busy, fearful and hateful towards the ‘enemy’.

The perpetual war also serves as an excuse for a nation’s failings and shortcomings. The economy, the labour force and industry are all centered around the new ‘war’. People live a miserable existence with poverty and no hope of improving their standard of living.

If tyrants like the Victorian parliament are allowed to pass these types of laws, anybody who questions the bringing upon of mass vaccinations, forced self-isolation or even social unrest, will be labelled a ‘public health risk’ that will danger the livelihoods of those around them.

That is how it always starts.

Power in the wrong hands is like a drug — delivering a dopamine hit to any person who has it. Soon enough they want more, and the earlier dose doesn’t suffice anymore.

Given that we cannot know upfront who handles power well, we should always grant the smallest amounts to those who ever seek to gain it and influence society. Grant powers to a power junkie to deal with a ‘once-in-a-­century crisis’, and they will want them forever.

Ditto Victoria, a state that has become alarmingly conditioned to a rolling state of emergency, with political biases built in to allow their continuation.

One of the very worst symptoms of COVID-19 is the lust for power among political leaders, bureaucrats and institutional bosses who claim they need more power to keep us ‘safe’.

The word is a double-edged sword. Everyone wants to be safe. The job of government is to keep its citizens safe, you know, because they work for us.

But keeping us ‘safe’ is also meant to keep us quiet. Safety has become a political strategy throughout COVID, a linguistic cloak that politicians wrap around disproportionate powers.

‘COVID Safe’ has become the kicker to make policing easier ­beyond the pandemic.

Victoria is in a dangerous state of slumber over what leaders are doing to shore up their powers, while simultaneously taking the rights of the citizen away.

Beware of these names who want COVID powers made permanent, while at the same time continuing to shy away from a debate on the subject.

Those that suggest QR code monitoring should extend beyond COVID.

Why? So that bureaucrats and government can more frequently trace where citizens go?

Do not fall for it and continue push back.

In South Australia, the Marshall Government bowed to pressure from its own Liberal party-room to water down proposed laws that would permanently enshrine COVID-19 pandemic provisions.

Victoria can do the same — even if they think they have the floor locked.

Bombard your local electorate with emails, letters and phone calls. Let them know that their job as your representative will not continue for much longer if they support such a bill.

Lasting social change is achievable, even if it may be messy, noisy and frustrating at times..

Think of those arrested and imprisoned at the turn of the 20th century. Social change isn’t achieved over cups of tea and cucumber sandwiches. Human rights aren’t gained by holding hands.

The frequent push by political leaders to make policing easier comes at a very high cost.

Those with powers should be working harder to find real criminals among us, rather than demanding COVID-style permanent powers that undermine our freedoms.

Think about what we are giving up, inch-by-inch, and day-by-day.

Victorians must reclaim their rights to be safe from overzealous politicians, unelected health bureaucrats and tyrannical police forces.