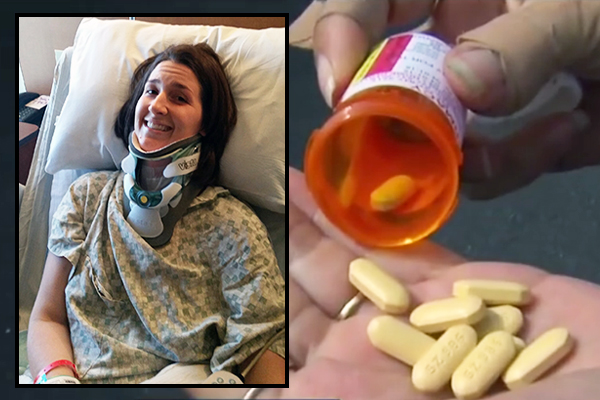 These antibiotics received countless warnings time and time again. Since 1992 consumers have reported the devastating effects they can have on the body, and yet the FDA did nothing. In 2016, the drug warning was finally updated to include the reports, but for many it was too late, and for some, this class of drugs is still being prescribed despite the unnecessary risks.

Amy Moser is one of the patients whose life was forever changed due to this drug. She writes out her full story on her blog Mountains and Mustard Seeds. She says she is no way against modern medicine, but the FDA ignores some warnings about dangerous drugs, and it is up to the consumers to spread the information.

In 2010, Amy took Cipro, a fluoroquinolone antibiotic, for a unitary tract infection (UTI), and her body would never be the same since.

Even though there has been a warning about Cipro that FDA posted that year, she was not warned about its side effects by her doctor.

“I wish I had been given the opportunity to soak up this information before it was too late,” she writes. The antibiotic caused her to have multiple spontaneous tendon and ligament ruptures, spinal degeneration, join dislocations, and arthritis. In seven years she had to have 20 surgeries just to deal with the damage.

“A round of antibiotics literally changed the path I was walking, into a path that I couldn’t even crawl on.”

The harm caused by fluoroquinolones is so severe, because they damage the DNA mitochondrial repair cells, the cells that heal the damage in the body. In short these antibiotics damage the cells that are for repairing damaged cells. The body starts falling apart with no way to heal.

“You now have tissue paper tendons and ligaments. You are a human piñata at a party and life is whacking you left and right.

Do you know what it feels like to hear and feel your shoulder pull apart like taffy, or your achilles pop and tear apart like an old rubber band?”Amy writes.

Fluoroquinolones also cross the blood brain barriers, and for many people, this can result in psychiatric problems, including depression and suicidal thoughts.

The damage is also cumulative. The more of these antibiotics the person takes in their lifetime, the more damage can occur.

Amy said she believes that it happens to up to 100% of people, the question is when. Some fall apart after the first round of these antibiotics, some are still holding on after 25th round. Some people die after one pill, she writes. It took four rounds for her to feel the damage. After taking Cipro, Amy had to undergo 20 surgeries in seven years. PHOTO: Mountains and Mustard Seeds

“This was my nightmare. It gets worse. There is no cure. No treatment. No relief. No specialist even.”

None of them could a way to cure her; all they can do is keep repairing what breaks.

“They know the science behind the damage that flouroquinolones cause, but the science is not there yet in how to reverse it.”

She gave the following advice to her readers, who are considering taking a fluoroquinolone antibiotic:

“Don’t take your chances. Don’t be afraid to demand an alternative… I’ve refused these medications on multiple occasions and so has my mom who is allergic…There are other options if you demand them.”

Many of her readers had similar stories to share:

“I too have had a quadriceps tendon rupture after taking Cipro. Cipro was prescribed for a post op infection after having my knee replaced, my quad tendon of the same operative leg ruptured causing a severe setback in my recovery.” – Colleen

“My doctor gave me Cipro on a hospital visit. I had a bladder infection, diverticulitis and pancreatitis at the same time. I did not know they were giving me Cipro. After two days I started having hallucinations…I developed a condition called C-diff. I had to have a fecal transplant, which worked. Now two years later I have chronic joint pain. I have had a knee and both shoulders replaced.”

“I had a reaction to Levaquin. I reported to the DEA and they did nothing. On the 2nd tablet I woke up with “burstis type” pain in my right shoulder.” – P. Duncan

Fluoroquinolones: The Most Dangerous Common Antibiotics on The Market

Fluoroquinolones is a class of antibiotics that can easily take the title of the most dangerous antibiotics available on the market.

On July 26, 2016 the U.S. Food and Drug administration (FDA) revised the warning for these antibiotics to the strongest possible FDA warning.

“These medicines are associated with disabling and potentially permanent side effects of the tendons, muscles, joints, nerves, and central nervous system that can occur together in the same patient.”

This serious warning was due to fluoroquinolones’ seriously side effects and damage to:

Many studies back up the warning:

Fluoroquinolone antibiotics have been associated with Achilles tendinitis and rupture in reports as early as 1992.

A 2010 report concluded that fluoroquinolones are associated with many musculoskeletal complications involving tendon, cartilage, bone, and muscle that are often underreported.

A 2003 review connected fluoroquinolones to tendon injuries, especially in patients with other existing health issues.

Fluoroquinolone antibiotics are supposed to be prescribed only for serious bacterial infections that failed to respond to other forms of treatments. Yet, they are prescribed for sinus infections, ear infections, and urinary tract infections (UTIs). The side effects for some people are severe, often altering the quality of a person’s life forever. If your doctor is prescribing them to you for a sinus infections, UTIs, and bronchitis, it is safer to ask for alternatives.

Also, it is important to eat as clean as possible and take proper care of your body both inside and out to prevent infections, with natural hygiene products and by including plenty of natural antibiotic foods in your diet such as onions, garlic, and oregano to name a few (learn more here). Healthy probiotics found in fermented foods and probiotic supplements can also keep bad bacteria at bay.

If you do contract an infection, it is best to consult with a holistic, licensed doctor to learn what your options are and monitor the situation before seeking the proper treatment. Infections can spread quickly and without warning if not properly addressed in a timely fashion.

Watch a report about the recent FDA warning:

Warning: Common Antibiotics Cause Seizures and Brain Dysfunction in 70% of Patients (What to Use Instead)

This article is for information purposes only and does not constitute medical advice. See our full disclaimer here for more info.

2 thoughts on ““This antibiotic will ruin you” – A Woman Had to Undergo 20 Surgeries to Repair Damage This Common Drug Caused.”