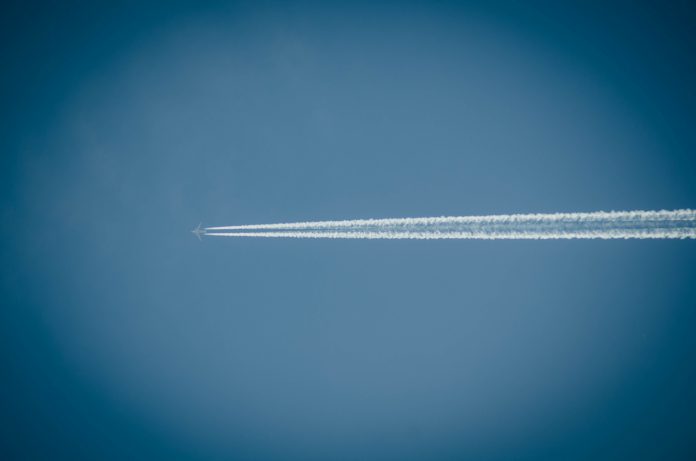 WASHINGTON (INTELLIHUB) — High-level Trump Administration officials are planning on conducting a multi-pronged operation to study and test stratospheric-geoengineering within the next 18 months before deploying full-scale chem trailing operations that could continue for the next 100-years non-stop in an effort to thwart alleged “global warming.”

So what is geoengineering?

According to a 2009 Royal Society publication geoengineering is defined as: “the deliberate large-scale manipulation of the planetary environment to counteract anthropogenic climate change.”

Geoengineering is nothing new and has been conducted covertly across the world’s skies without the general public’s knowledge or permission since the early 1990’s and even heavier during the Obama Administration through the institution of the United States Global Change Research Program headed up by Fmr. White House Science Czar John P. Holdren, as reported by Intellihub back in early 2011 in a special report titled: “Exposed: Secret presidential chemtrail budget uncovered — Congress exceeds billions to spray populace like roaches.”

According to the report, “a select group of diabolic oligarch globalists and their puppet cronies embedded within the United States government are now involved in what some would say are crimes against humanity. These tyrants will stop at nothing to usher their hush, hush global aerosol agenda into full swing.”

Moreover, a report prepared for the U.S. Air Force titled: “Weather as a Force Multiplier: Owning the Weather By 2025,” the U.S. Air Force plans on fully control the weather on earth by the year 2025, far surpassing even the most horrific act of terror (real or staged), posing as literal gods, these globalists will stop at nothing to control the world by not only controlling the fraudulent banking systems but by owning the weather through a process (blanket term) called “geoengineering.”

Other globalist sponsored reports maintain that our planet is in a constant state of threat and is being bombarded with radioactive solar rays increasing planetary temperatures due to human carbon emissions. However, vast bodies of research now show that is not the case and that global warming is another globalist myth, a Ponzi scheme to collect a Carbon Tax worldwide, benefiting the very same group behind the curtain.

The myth the global warming “Carbon Tax” pushers have been spouting apparently can only be fixed by spraying deadly toxins in an aerosol particulate form into the earth’s atmosphere via large sprayer converted aircraft specifically assigned to perform Geoengineering tasks.

Now, in 2017, a man by the name of David Schnare, one of 11 appointees to President Donald Trump’s Environmental Protection Agency (EPA) transition who is now a more permanent fixture of the Trump Administration, plans to continue full-scale chemtrailing operations for another century or longer.

A report published by Inside Climate News on Feb. 16, 2017, written by Marianne Lavelle titled: “EPA Official, After Years of Work to Thwart the Agency’s Mission, Returns to Carry Out Trump Agenda” details how Schnare began his career with the EPA in 1978 and was instrumental in implementing the Safe Water Drinking Act.

“During his tenure at the EPA, Schnare simultaneously directed a conservative think tank’s environmental program that opposed regulation as a pollution remedy. He testified to Congress that carbon regulations do greater harm to the environment than carbon dioxide. He also co-founded a legal organization funded partly by fossil fuel interests, and through that group launched an effort to make public climate scientists’ private emails to call their work into question,” Lavelle wrote.

However, it was in 2012 when Schnare filed suit to put a halt to an ongoing EPA investigation into the effects of particulate pollution on human health which cleared a path for the continuance of stratospheric geoengineering programs which originated from an NSA chemtrail program out of Wright-Patterson Air Force Base as admitted to Intellihub’s Shepard Ambellas by Fmr. NSA operative A.C. Griffith in a 2011 interview before Griffith’s death.

During the interview, Griffith told Ambellas that chemtrailing operations are multifaceted and don’t stop with stratospheric manipulation but rather have major military applications which get into “smartdust” and over the horizon communications. Griffith told Ambellas that the particulates which contain barium and aluminum blanket everything on the planet and can be used to get real-time data from the “battlefield” which was defined loosely in the Patriot Act.

According to Griffith and associates, chemtrail operations can “reduce solar radiation due to an ozone crisis” and can also control the Earth’s weather using HAARP. The operations can additionally be used for “biological detection and decontamination programs” and secret projects such as the “Radio Frequency Mission Planner (RFMP) and the Variable Terrain Radio Parabolic Equation (VTRPE).” And if that’s not enough they can also be used as a biological weapons delivery system, Project Cloverleaf, as outlined by Griffith and Clifford Carnicom.

Due to the fact that Barium is what doctors have patients drink so that their innards can be X-rayed, the same principle is incorporated into the militarized applications and aspects of chemtrail “smartdust.” Before his death, Griffith maintained that once the particulates and “electroactive polymer fibers” dust the “battlefield” they then interact with unique frequencies given off by humans, animals, and plants, which then provides the military with a three-dimensional map of the of the battlefield, also allowing them to track any individual or troop movement in real-time as part of a self-aware decision-making network also known as “Skynet.”

Although the program was publically admitted in 2011, it was in operation in 2001 when it went live.

“Geoengineer David Keith made a statement a couple of years ago. He said, ‘geoengineering gives man God-like power,” Murphy explained. “Now I’ve never chased God-like power, probably very few of the listeners, unless they are the elite who are checking this film out, have probably not chased God-like power — but it must be one hell of a rush. And I think what most of us can relate to is maybe a relative or a friend who became addicted to a drug and in that drug addiction they have put their health and their family members health at risk in order to get the rush of that drug.”

Murphy maintains that the “chemtrail-geoengineering footprint of barium, aluminum, and strontium” and says that “these metals match a number of geoengineering patents that were specifically designed to spray these metals out of airplanes into the sky for the stated goal of cooling the planet.”

Rosalind Peterson with the Agricultural Defense Coalition, who also appears in “Shade,” points out that these metals are killing our plants and trees. Peterson took Intellihub’s Shepard Ambellas and famed documentary filmmaker Jason Bermas (Producer of both Loose Change and Fabled Enemies) on a tour in Northern California in which she showed examples of trees being affected by particulate fallout.

These dangerous toxic metals have also made it into the human bloodstream as documented in “Shade” after a group of about 20 people in Mohave County, Arizona, all got their blood tested which revealed very high levels of barium and aluminum.

Shepard Ambellas is an opinion journalist, analyst, and the founder and editor-in-chief of Intellihub News & Politics (Intellihub.com). Shepard is also known for producing Shade: The Motion Picture (2013) and appearing on Travel Channel’s America Declassified (2013). Shepard is a regular contributor to Infowars. Read more from Shep’s World. Get the Podcast. Follow Shep on Facebook and Twitter.