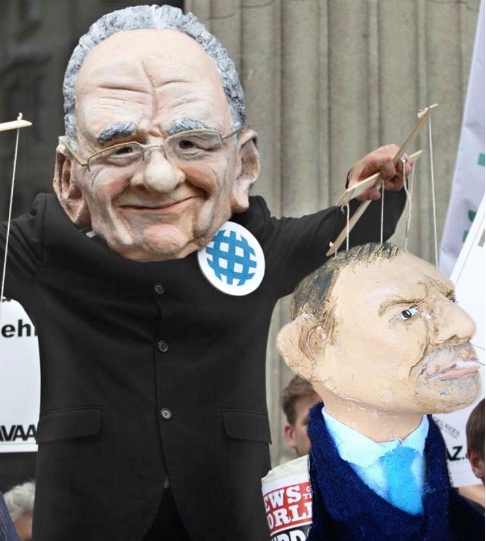 Rupert Murdoch, the billionaire media mogul behind News Corp and 21st Century Fox, has visited Australia this month and once again invariably seismic events have been triggered, culminating with the #LibSpill.

Is it any surprise that Malcolm Turnbull has been replaced less than a fortnight after Murdoch arrived here? Of course it isn’t, Ethan Nash argues.

Rupert Murdoch flew in on August 10th and set about doing what he always does: he attended the annual ‘News’ Awards, conducted one-on-ones with his editors and then signed off on the inevitable promotions, demotions and executions of the company’s most senior staff.

What’s unique about Australia is Murdoch owns two-thirds of the country’s print media. No other democracy has anything approaching his effective media monopoly.

Murdoch’s print media has a disproportionate impact on setting the day’s overall agenda, and more often than not, the electronic media just rips what Murdoch has put on the front page to publish.

Combined with a masterful conflation of ‘opinion’ with ‘news’ – a technique in Murdoch’s own world of fake news well before “fake news” became topical after the 2016 US elections – this man has been able to influence and manipulate Australian society for decades.

The message to Australian journalists is clear: either toe the line on what Murdoch wants or he kills your career. This includes going along with the fake corporate political circus.

To this notion, the Sydney Morning Herald described the importance of the occasion upon landing:

“…It comes as the global media conglomerate he spent decades building up faces a critical juncture – and as everyone attempts to guess what Murdoch’s next move in Australia will be.”

Murdoch would also attend the 75th birthday of the Institute of Public Affairs on Monday night and was interviewed on stage with former Liberal PM, John Howard, by one of the media tycoon’s preferred columnists, Janet Albrechtsen.

Shortly after leaving the IPA conference in Melbourne, the #LibSpill circus commenced.

Now, while much of Tuesday’s manufactured party room drama was painted to be driven by Tony Abbott and his ‘ultra-conservative cohorts’, the willing executioners were within News Corp, its various arms and associated broadcasters.

The front pages of the company’s tabloids were firmly against Turnbull, the Herald Sun branding him “Dead Mal Walking” and the Courier-Mail welcoming candidate Dutton with “The Pete Is On”.

The choir was clearly singing from the same song sheet.

Anyone who doubts Rupert Murdoch’s role in the political chaos that has played out in recent days has never worked for him at a senior level.

Bruce Guthrie, former editor-in-chief of News Corp’s the Herald Sun, spoke this week on Murdoch’s latest visit and the influence it would have had on the current spill:

“I once endured all three on one of his visits – surviving a relatively benign one-on-one with Murdoch, accepting a News Award and then getting sacked, all in a matter of days.

Throughout all this he would have been forming a view that Turnbull’s time was up – in fact, he probably arrived with that view – and then imparted that message to his editors.”

“What we know is Murdoch visited Australia in the last few weeks. He called his editors in. And then each of the papers turned feral.

I know dozens of politicians, business leaders, academics and journalists, both left and right, too frightened to take Murdoch on because they fear the repercussions for them personally.

They have seen what happens to people who have challenged Murdoch’s interests as Murdoch then sets out to destroy them.”

This is not the first time this type of painfully obvious media influence has been the underlying cause of turmoil relating to Australian politics. In fact, his global influence in the United States and Europe in particular is well documented.

Time and again it’s been shown that he likes to meddle in the politics of the countries his outlets operate in. Just last month The Washington Post reported that he talks with US President Donald Trump every day.

NOT THE FIRST TIME

Just take a look at some of the headlines from the last time we had to sit through this nonsense:

Flashback to the print nightmare of 2013. Photo: Broadsheet

Journalists traditionally tread a fine line with politically coverage, forced to sift through leaks, whispers and background conversations when reporting a fast-moving story. On this occasion though, too many appeared to cross it, and that is not a ‘coincidence’.

Most of those work for News Corp or its entities.

We are talking about The Australian, The Daily Telegraph, tabloid newspapers around the country, 2GB in Sydney, and Sky News in particular with its evening line-up, led the campaign.

In the end, it took just 11 days after Rupert Murdoch’s arrival to bring about a party room spill.

It played out less than 24 hours after that IPA appearance.

It’s all a game folks.

Let’s not forget what they were distracting us from while all of this was happening.

Murdoch may have enormous power but even he can’t penetrate Canberra’s fog: smh.com.au

Touching down in Australia, Murdoch may be plotting his next move: smh.com.au

Murdoch and his influence on Australian political life: theconversation.com