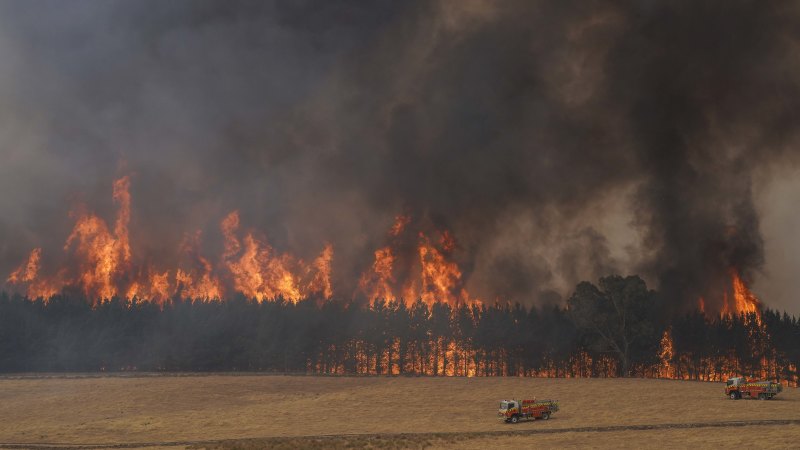 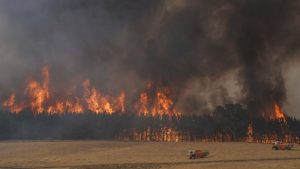 Two fires straddling the NSW and Victorian border have merged, creating a 600,000-hectare “mega-fire” south of the Snowy Mountains amid dangerous and erratic conditions.

As dry heat, shifting winds and powerful gusts fanned more than 100 blazes devouring drought-parched bushland throughout southern NSW, the East Ournie Creek and the Dunns Road fire zones came together north of Mount Kosciuszko on Friday evening, near the village of Tooma.

RFS spokesman Anthony Clark said a “finger” of the East Ournie Creek blaze had collided with the Dunns Road fireground at the Clarkes Hill Nature Reserve, near the NSW and Victorian border.

he Ournie Creek fire already merged with the massive Green Valley fire earlier in the week.

Now-realised fears that multiple fires would merge follow hard on the heels of the Gospers Mountain “mega-fire”, which ignited in Wollemi National Park and swallowed an area seven times the size of Singapore.

North and north-westerly winds will give way to a southerly change at some point overnight, which combined with merging fires, could provide additional challenges from multiple entry points. Mr Clark said they were “expecting fires to potentially spread in two directions overnight.”

“It provides a challenge for firefighters as when they merge, it increases the size and opens up more uncontained perimeter.”

At 7.30pm, more than 2500 firefighters were battling more than 150 blazes in NSW, as the bushfires crisis escalated across four states. More than 60 of those NSW fires were uncontained.

The NSW Rural Fire Service issued an emergency warning for a fire burning near Coonabarabran on Friday afternoon, as another blaze ignited near Faulconbridge in the Blue Mountains. RFS Commissioner Shane Fitzsimmons said both blazes were most likely sparked by lightning strikes.

Nine fires were at “watch and act” level across the Snowy Mountains, Southern Highlands and South Coast, including East Ournie Creek and Dunns Road.

Green Valley was upgraded to emergency just after 7.30pm.

The town of roughly 2500 people is considered a gateway to the Warrumbungle National Park and the Pilliga Forest, which are packed with dry, dense bushland.

Winds gusting up to 90km/h are set to sweep through the state later in the evening. Temperatures soared past 40 degrees in inland areas, while the RFS warned large blazes in the south-east could spread under worsening conditions, or shoot off embers that might create spot fires.

The blustery conditions are expected to bring mixed fortunes for firefighters overnight – dropping temperatures on the ground while making blazes more unpredictable after dark.