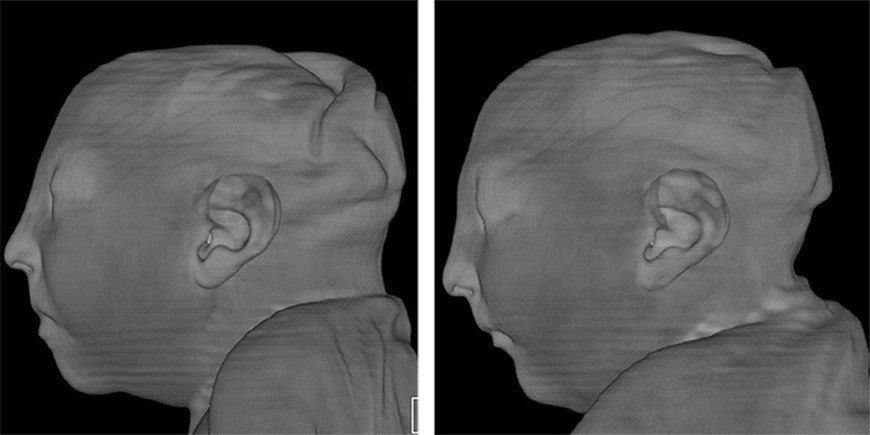 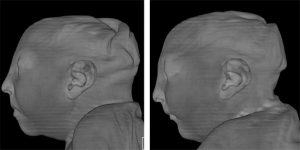 This trilogy asserts an incredible Hypothesis:

The relevant medical personnel were just following the mantra, “Ultrasound is harmless.”

Presented are the inevitable discussions that must follow the implications of Jim West’s prior ultrasound book, 50 Human Studies. The tone of the present book is direct and unapologetic because it rests on that empirical evidence. It critically reviews terminology. It reviews and reveals the actual character of the epidemic.

Because there are no direct microcephaly-ultrasound studies, strong circumstantial evidence is essential. Here are several items.

Yet, Zika causation cannot be demonstrated. Ultrasound can.

The Network Headquarters at the microcephaly epicenter

The Network is a telemedicine network, an internet driven consulting group with a virtual presence in clinics.

It promoted unprecedented high-risk ultrasound sessions throughout the epidemic region.

Its headquarters and base hospital are in Recife, state of Pernambuco, ground zero for the epidemic. Pernambuco and the adjacent state of Paraíba are primary service regions. 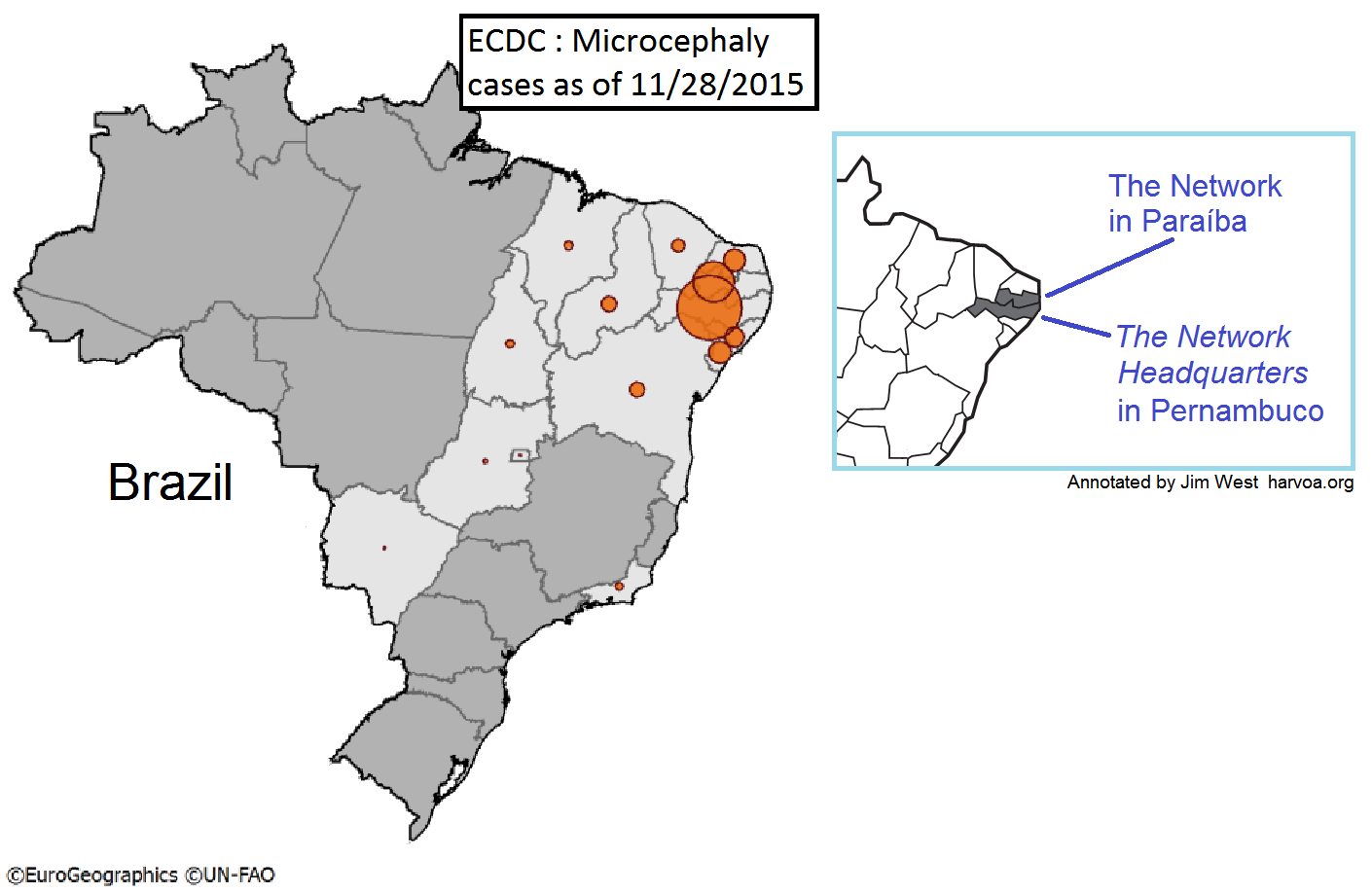 It is well known that medical radiation such as X-rays can cause microcephaly, yet all literature concerning possible causation for the Brazil epidemic omits this topic.

The mainstream encourages a false argument: The absurd Zika virus theory versus various weak genetic and environmental theories. Omitted is the most obvious contender, medical radiation. Ultrasound and X-rays are medical radiation and both are teratogenic (physically damaging to fetus), yet avoided in all pertinent literature.

Environmentalists omit prenatal medical radiation. It is simply not on the table.

This book carefully considers and rejects causation by genetic mutation, viruses, larvicide, insecticide, pharmaceuticals, vaccines, and combinations thereof. Medical radiation is reviewed and determined to be the cause.

The prior book demonstrates ultrasound’s destructive capability for all fetal organs and specifically the brain. With that context, the following statement by Ashwal (2009) puts ultrasound in the ballpark for microcephaly causation.

“Microcephaly may result from any insult that disturbs early brain growth…”

The book provides much evidence. Many images, tables and graphs are included for clarity. Here are a few examples from the three Parts:

CDC image of a microcephalic infant. 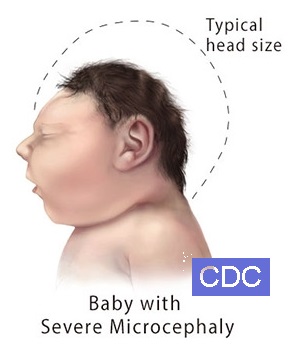 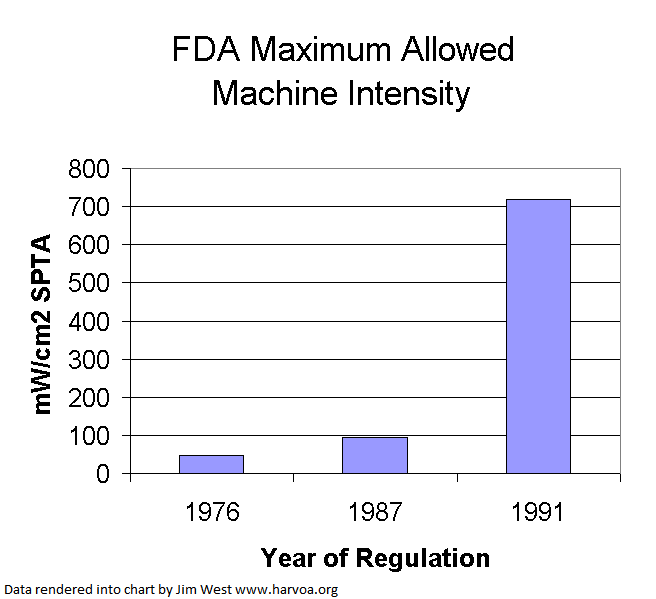 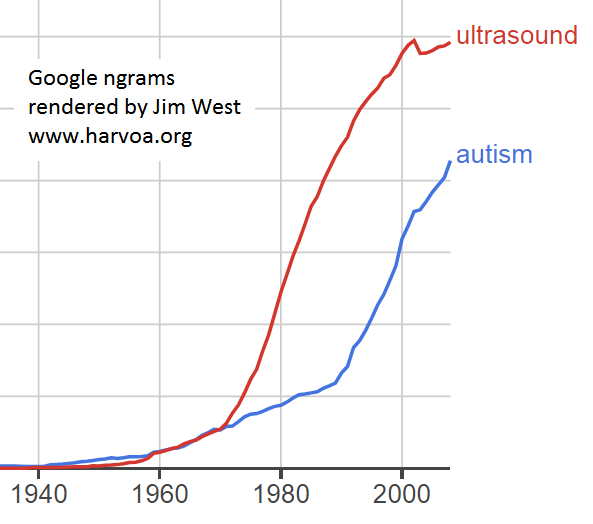 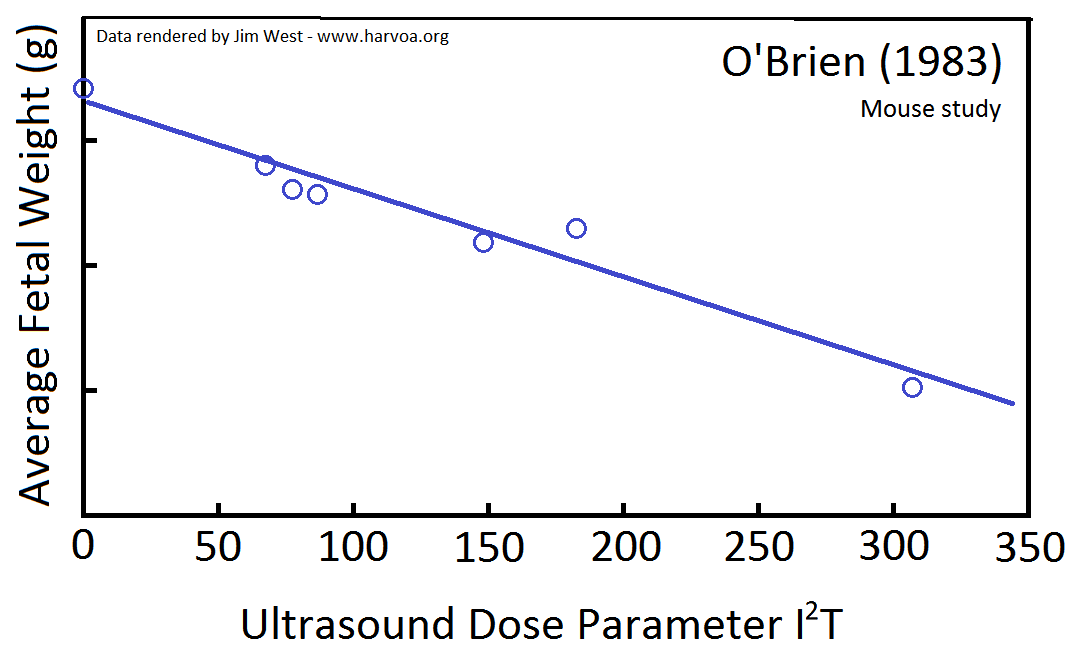 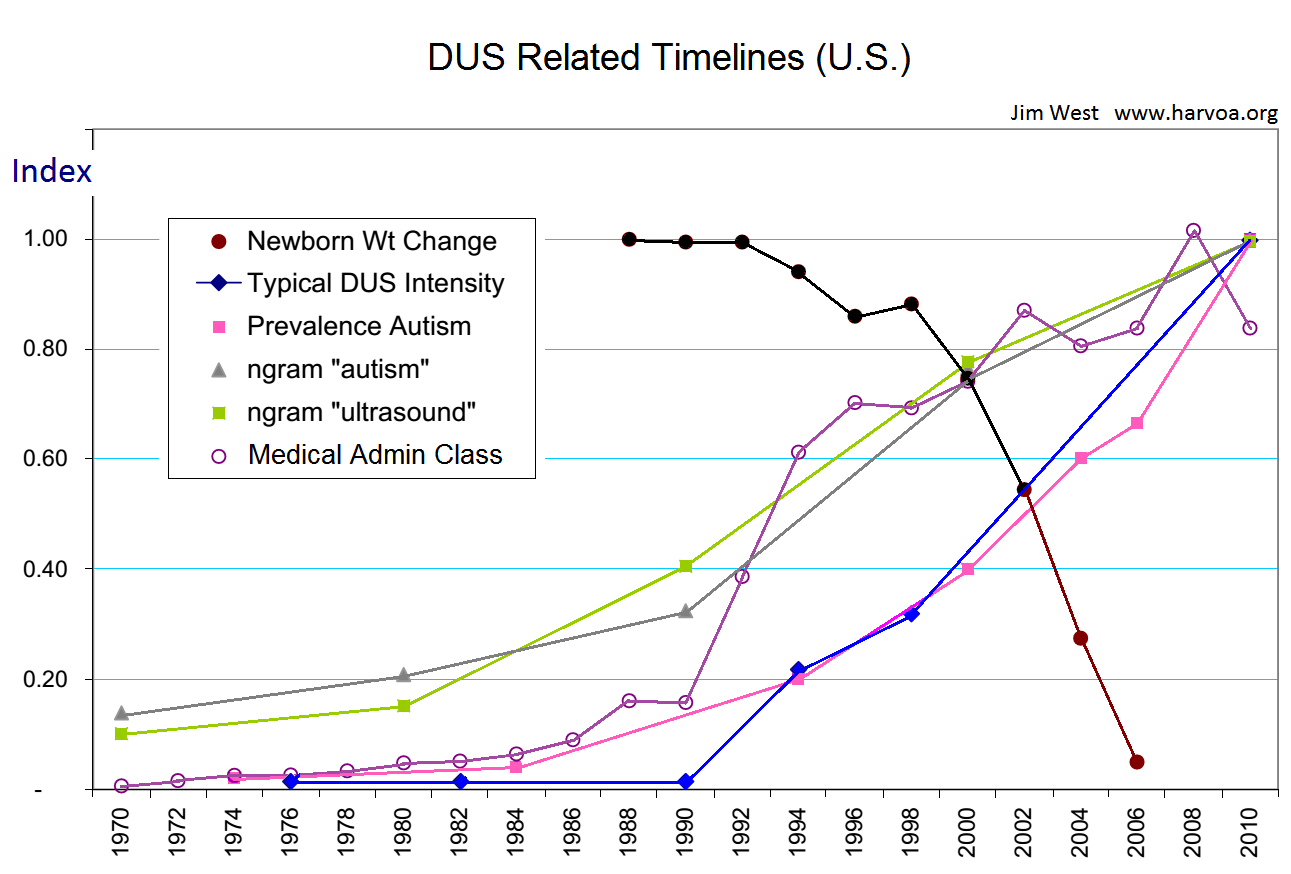 Ultrasound annotation in blue is by Jim West. 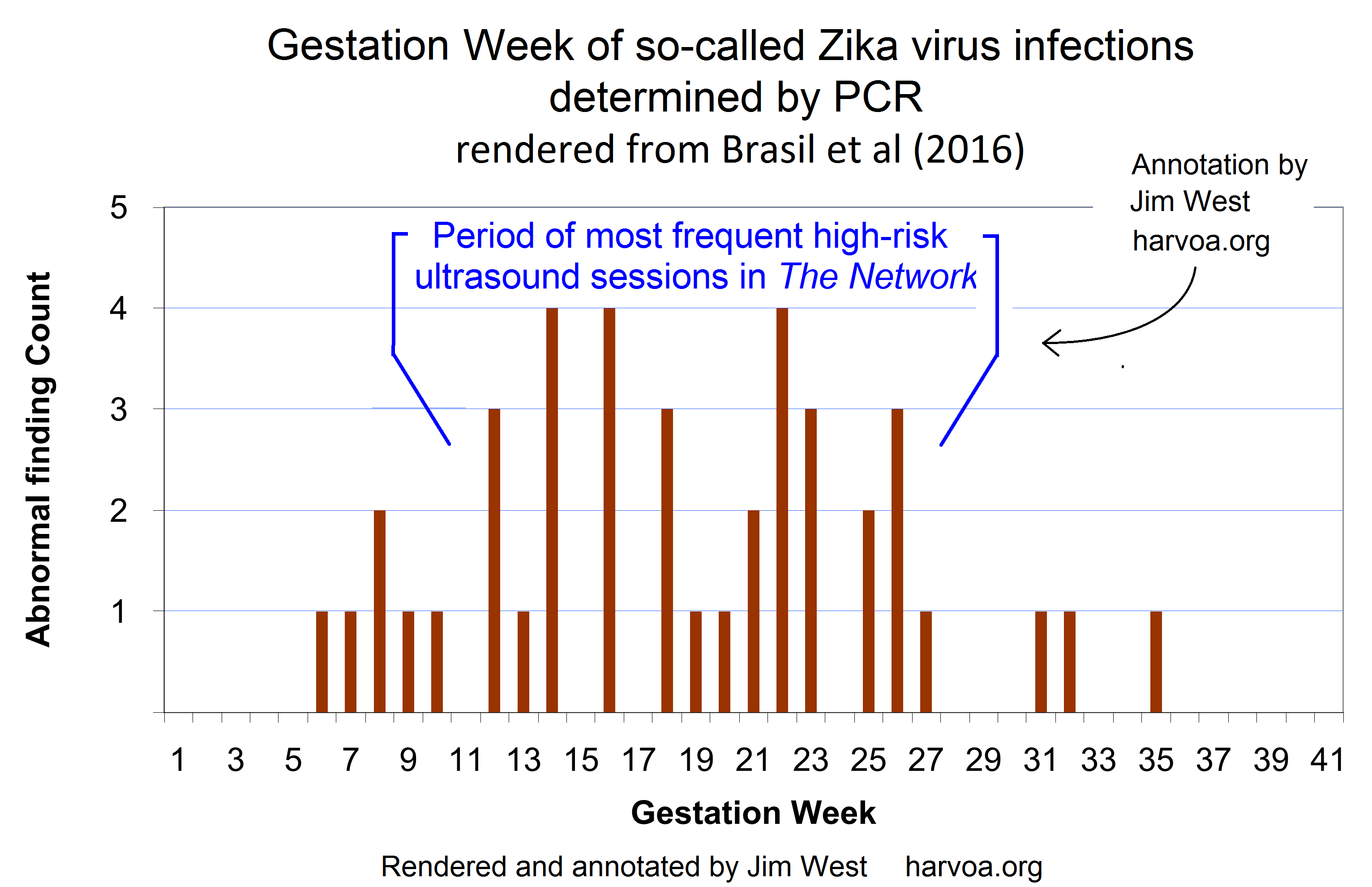 Incidence versus Distance from The Network 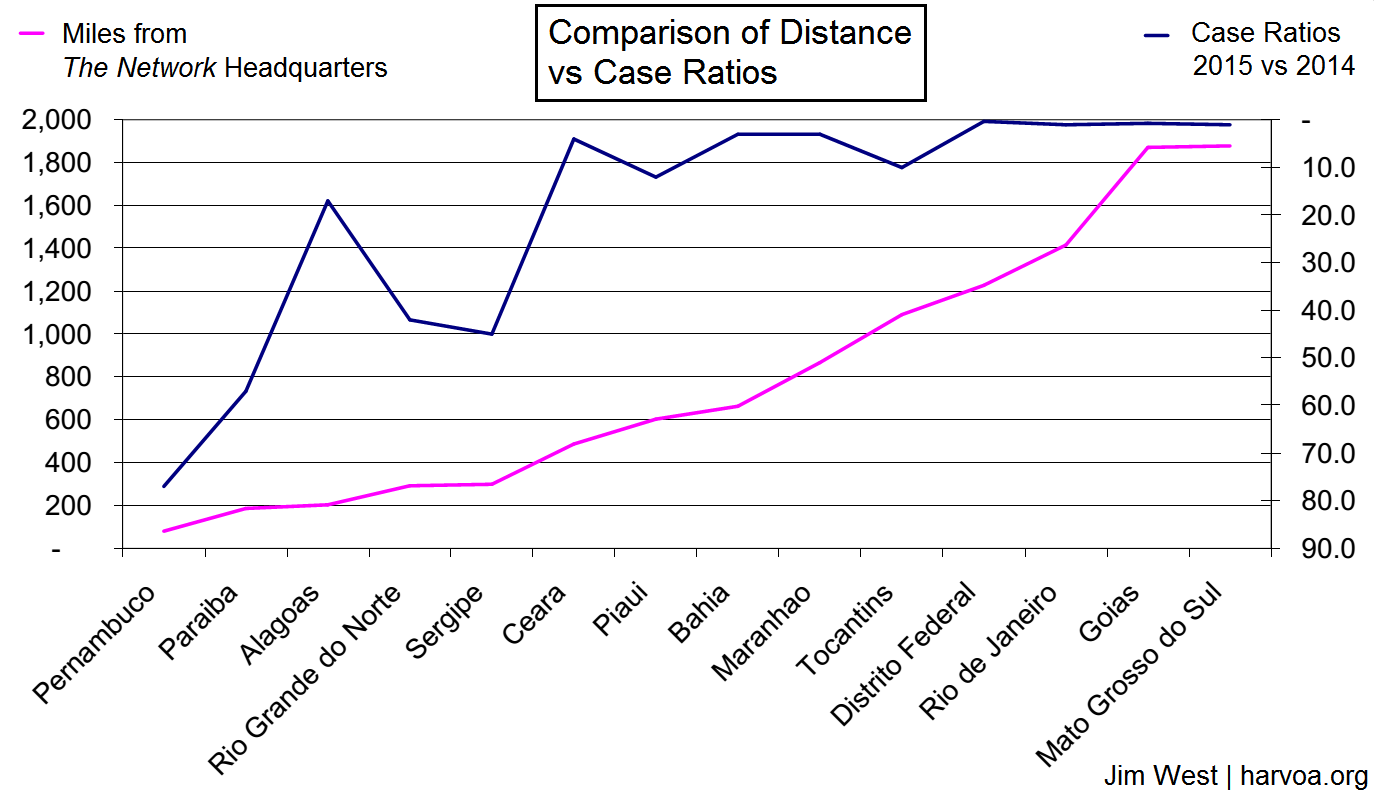 This epidemic cannot have been caused by an infectious virus because years after the epidemic began, it had not spread beyond The Network region. Case incidence rise within The Network membership was far above any region in the Brazil or in the world. Timelines and location and capability all indict the special unique prenatal ultrasound program within The Network.

Numerous personable witness accounts are available from professional clinicians at epidemic ground zero. These are dramatic accounts, for example, one veteran doctor in Recife (state of Pernambuco) describes a 270x increase in microcephaly incidence. Here is another, quoted from Wall Street Journal:

With all my years of experience, I never had seen an epidemic of this magnitude,” said Dr. Ana van der Linden, 75 years old, the matriarch of a family of five physicians….

The World Health Organization (WHO) published a study generated from a Network database of newborn head circumference records from 2012 to present. These were compared with other historical records of the same region and detailed epidemic timelines were published. Other studies were published for every state in Brazil, comparing annual average incidence.

All relevant literature is consistent whether it be journalism or science, genuine, mistaken, or dissembling. And it all omits the elephant in the room, diagnostic ultrasound.

Incidence (as historical increase) was huge within The Network, 13x above the highest state incidence.

States nearest The Network had the highest incidence. Other state incidence was insignificant.

Sub-conclusion: Something within The Network caused the epidemic.

It could not be Zika virus, because this virus paradigm is easily deconstructed. Even mainstream scientists argue against it.

Environmental causes do not correlate in time, location, and capability.

Prenatal ultrasound is certainly capable of causing microcephaly, as demonstrated by the book, 50 Human Studies and arguments in the present book.

It avoids consideration of The Network, though The Network is at epidemic ground zero. Network data and reports are essential to any discussion.

It considers all theories except medical radiation.

It avoids the topic of ultrasound despite its obvious capability.

It places The Network beyond suspicion by describing it as a NEONATAL (newborn/infant) operation, examining children for heart defects and referring to them to services such as surgeons. Echocardiography (heart ultrasound examination) is mentioned but only in a neonatal context.

PRIVATELY, The Network described its main mission as PRENATAL echocardiography.

With this exam, The Network provides expert consultation to remote clinics. As time went by, operator education and the promotion of “awareness” for this exam became increasingly important. This pioneering “telemedicine” network conducts its unique work via internet in a hazardous manner, with live-streaming video including ultrasound sessions.

Prenatal echocardiography is known to be higher risk exam, with sessions lasting up to two hours or more and with repeated sessions per fetal patient. Working through the internet would increase risk due to clumsiness and the extra time spent exposing the fetus to high intensity ultrasound. Each qualifying operator requires an average of 100 sessions to gain competence, representing another source of elevated risk.

Conclusion: The epidemic was caused by a prenatal ultrasound program run by The Network.

Microcephaly is just the tip of the iceberg.

This three-volume book totals nearly 600 pages. Because the topic is politically sensitive, fact-checking is rigorous, as is copyediting. The book is written and Part A is published.

Part A describes The Hypothesis with enough documentation to make a very strong case.

Parts B and C will soon be available with detailed supporting documentation and analysis of the communications with The Network and related literature.

The Hypothesis is extended to related topics.

E-book, readable any computer, Smartphone or Kindle (color or grayscale depending on device)

Thanks to Jon Rappoport (NoMoreFakeNews.com) for his bold and immediate criticism of Zika virus causation. To Jon Rappoport and Claus Jensen for early discussions. To Ingri Cassel (VacLib.org), Adam Crabb (CrazzFiles.com), John Wantling and others for support and assistance.

Jim West is known for his original research published June 2000 in The Townsend Letter for Doctors and Patients, where he introduced the pesticide/polio paradigm and unearthed research arcana. His work found its way into several professional books, journals, and websites. It has been used as a powerful argument against vaccine paradigms. In 2001, ABC News journalist and producer, Nicholas Regush, extensively reviewed Jim’s research into environmental causation for West Nile epidemics, gaining a strong readership response. Jim resides in New York City, where he is a member of the NoSpray Coalition which litigated against NYC helicopter pesticide spraying programs. He is a member ofToastmasters.