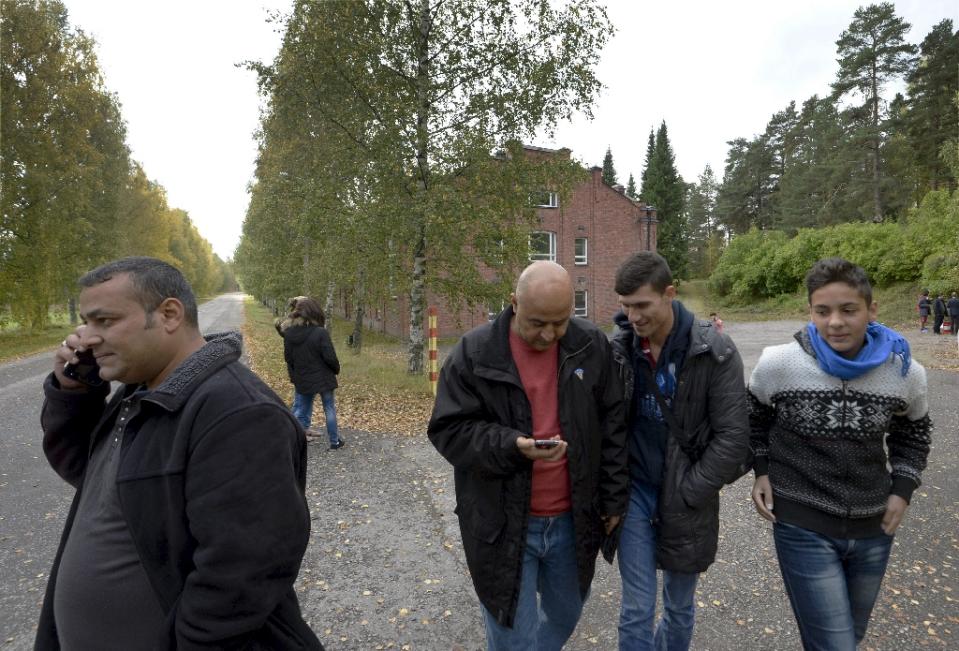 NOTE: Refugees with mobile phones & leather jackets, give me a break. These people are opportunists, shopping for the perfect country so they can get everything handed to them on a silver platter. Finland is a country that i would absolutely love to visit, but i simply can’t afford to & these invaders are shopping for something better, incredible.

Tornio (Finland) (AFP) – Hundreds of predominantly Iraqi migrants who have travelled through Europe to reach Finland are turning back, saying they don’t want to stay in the sparsely-populated country on Europe’s northern frontier because it’s too cold and boring.

Migrants have in recent weeks been crossing back into Sweden at the Haparanda-Tornio border just an hour’s drive south of the Arctic Circle, and Finnish authorities have seen a rise in the number of cancelled asylum applications.

“You can tell the world I hate Finland. It’s too cold, there’s no tea, no restaurants, no bars, nobody on the streets, only cars,” 22-year-old Muhammed told AFP in Tornio, as the mercury struggled to inch above 10 degrees Celsius (50 Fahrenheit) on a recent blustery grey day.

He had already travelled from Tornio to the capital Helsinki almost 750 kilometres (465 miles) south, and then back up to the Tornio border again to return to Sweden.

Migrants who lack proper travel documents are unable to take the ferries that run between Helsinki and Stockholm.

Another group of around 15 Iraqi refugees waiting at the bus station that Tornio shares with its Swedish twin town Haparanda also said they wanted to go back to southern Sweden.

“Finland is no good,” the men echoed each other.

Sweden may be just as cold as Finland, but Sweden has bigger immigrant communities because of a longer history of integration.

On September 19, several busloads of migrants made U-turns on the Swedish side when they saw hundreds of Finns form a “human barrier” on the Finnish side to protest against the sudden influx of migrants.

Anti-immigrant sentiment may be prompting some migrants to leave Finland, where the populist Finns Party is the second-biggest political party.

Early Friday, around 40 demonstrators — including one dressed in a Ku Klux Klan outfit — threw fireworks at a bus transporting asylum seekers to a new reception centre in the southern city of Lahti.

Another incident took place late Thursday in Kouvola, in southeastern Finland, when a 50-year-old man threw a petrol bomb at an emergency housing facility for asylum seekers.

It is difficult to know exactly how many migrants are heading back to Sweden, since some don’t even register in Finland before leaving.

But according to the Finnish Immigration Service’s head of asylum applications, Esko Repo, “by last week around 200 applications from Iraqi asylum seekers had expired,” meaning the applicant had either withdrawn it or disappeared.

But Repo said cancellations were on the rise, and registrations were taking longer because of the recent influx of migrants.

And the 30,000 expected this year may end up dropping: media reports said some Iraqis were posting self-shot videos of Helsinki on a Facebook page popular among Iraqi migrants to dissuade others from coming.

Around 500 migrants are arriving in Tornio each day, an influx that has stunned the tranquil town of 20,000 inhabitants and put its infrastructure to the test, even though most migrants are just passing through.

“The flow from the border has been out of control. I have been scared and have avoided going shopping in the evenings because we don’t know who these people are,” a 66-year-old pensioner who gave her name as Kirsti, told AFP.

Up to 1,000 migrants are estimated to be in Tornio on a given day, according to police and migration officials.

Some local business owners have accused “the dark men” or “these southerners” of pilferage and harassing women, but others said the crowds hadn’t caused any trouble.

“I haven’t seen any disturbances, but I don’t know why they come here when even our own people leave this town,” Matti Alaviuhkola said at his shoe repair shop on the main street.

On Tuesday, Finnish authorities opened a registration centre in Tornio, requiring migrants to register upon arrival before being sent to reception centres around the country.

The Finnish government sent dozens of police, border guards, customs and military to step up alien controls at the border, where locals have crossed freely between Sweden and Finland since the 1960s.

Busloads of migrants arriving from Sweden were driven directly to the new registration centre, as canine police units and military guards stood nearby to ensure that no one wandered off.

Finnish authorities have expressed concern about finding housing for all the refugees if the influx continues, despite new facilities opening every week.

Some locals said the influx was putting too much strain on the country in the middle of its own economic woes.

“We should close the border and check who these people are. Iraqis should be sent straight back since their country is not at war,” a metal worker and one of the organisers of the border protest, Eero Yrjanheikki, told AFP.