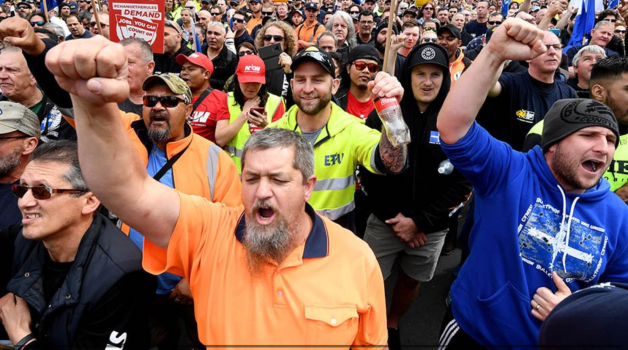 A stark admission in a leaked email has unveiled a dark unsupported future for Australian workers.

A leaked email from the Australian Trade Union Institute, which is the centre for providing education, collaboration and research for Australian Unions, has told that it will not support Aussie workers who choose not to receive the experimental COVID-19 jabs.

Not only is the ACTU’s position on mandatory vaccination for workers in favour of it but the leaked email describes how an upcoming webinar will explore how Union Organisers (Unionists) can begin to educate their members to get vaccinated.

The email goes on to say:

It will equip unions with the arguments for vaccination based on facts and evidence, explain the legal status of vaccine programs and vaccine mandates in workplaces, and provide guidance on how to talk about the vaccines in both workplace settings and in public media.

The unions have been DEAD SILENT over the last 18 months and have avoided vocalizing their position on mandatory vaccination for their members.

This type of behavior paints a picture of dodgy back room deals with Union heads and the Australian Government in order to keep unions quiet during this entire pandemic.

So why are they all of a sudden on the side of the Government and not their members?

Union delegates in workplaces across the country have been raising the issue of mandatory vaccination in their workplaces with Union Organisers for months. But unions have only responded with bland recommendations of following public health advice.

“Officially” the ACTU’s position is that they are adhering to the “Public Health Orders”. Which is by proxy adhering to whatever the government says.

The reality is that the ACTU WILL NOT help Australian workers who believe in freedom of choice and don’t wish to take the experimental COVID-19 vaccines.

The first No Jab – No Job

SPC Australia is a prime example of this right now. The company is the first Australian company to mandate COVID-19 vaccines for all staff. Completely disregarding their workers right to self determination and freedom of choice.

So where was their Union representatives in this matter? Right there by the side of the employer and in the shadow of the Australian government. They weren’t there fighting for workers. They in fact declared they weren’t opposed to it.

So far only one union body has showed its support for workers to make their own choice regarding vaccination.

It’s definitely a positive move but sadly only a drop in the ocean compared to the rest of Australian workers.

Are there some other powers at play here? Again, why have the Unions taken the side of the Government over workers (their members!)?

Enter Sharan Burrow. The former ACTU Secretary and now the General Secretary, International Trade Union Confederation (ITUC) who has her fingers in all pies. Including the World Economic Forum.

Her WEF profile reads like a technocratic globalist resumé. A player in Davos circles and handpicked to oversee and deliver the directions for unions the world over.

To quote her World Economic Forum profile she is:

Engaged on issues of the Fourth Industrial Revolution and its impact on workers. 2020, will co-chair the World Economic Forum’s first Global Technology Governance Summit.

With people like Sharan Burrow guiding union bodies and working with governments around the world it’s no wonder why they have been silent during the pandemic.

It’s all a part of the great reset.

The inside source of the leaked email suggests that workers/members still ask the hard questions of their Union and keep pushing the agenda of freedom of choice and no mandatory vaccination. There has been no consideration or discussion about fundamental human rights between the ACTU and the government. Human rights are apparently a conspiracy theory within ACTU circles.