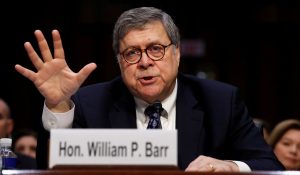 William Barr has hit out at the collective mindset and organized myths which permeate what the mainstream media now call journalism.

Commenting on filtered coverage concerning the Black Lives Matter™ protests, and riots in Kenosha, Seattle and Portland, Barr criticized the MSM for co-operating together in passing down to the public a coordinated narrative.

“I think there are a handful of reporters in the mainstream media that still have journalistic integrity, and there are some, but the overwhelming majority don’t have it anymore…The national mainstream media – has dropped any pretense of professional objectivity and are political actors, highly partisan who try to shape what they’re reporting to achieve a political purpose and support a political narrative that has nothing to do with the truth.”

This was preceded by Barr calling the largely Leftist run and operated media a “collection of liars.”

“They’re basically a collection of liars. Most of the mainstream media. They’re a collection of liars and they know exactly what they’re doing. A perfect example of that were the riots. Right on the street it was clear as day what was going on, anyone observing it, reporters observing it, it could not have escaped their attention that this was orchestrated violence by a hardened group of street fighting radicals…”

Exhibit (B) was the orchestrated narrative echoed by major news organizations claiming that riots in all three cities were “peaceful protests” vs. the high casualty rate among police officers.

Exhibit (A) was the (now infamous) chyron (worded graphic) CNN used in front of footage of a burning building, stating that the protests were ‘fiery but mostly peaceful.’

Barr, who is the current Attorney General; head of the DOJ (America’s Department of Justice), said, that the mainstream media [“national media”] are ‘not really interested so much in what really happened but in pursuing a preformed narrative that suits some kind of ideological agenda. That’s what it’s all become.”

This is Barr’s strongest condemnation of the media to date. His remarks coincide with the DOJ’s official investigation into the rioting, governing bodies, and financial backers.

Townhall stated that ‘the organizing behind the rioting in cities across the country is under investigation and federal law enforcement agencies are working to identify the individuals behind the chaos.’

The chief provoketors, Barr said, were likely to be ‘Antifa and Antifa like groups.’

Barr is without a doubt one of THE unsung heroes of the Trump Presidency. He’s no novice.

Last year he refused to issue un-redacted version of the much-hyped Mueller report for the sake of objective reasoning. Expressing concern for how the report might be mishandled, if placed in the wrong hands, such as activists posing as journalists, and concern for the legality of internal spying carried out by the previous administration on the current one.

It’s no wonder that news about Barr continues to go under-reported.