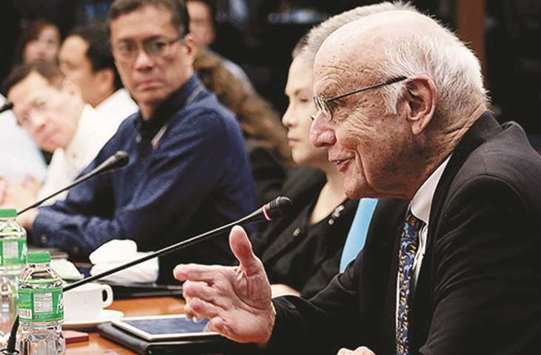 Dr Scott Halstead has said that he had suggested that blood tests be conducted on individuals to be inoculated with the vaccine.

An American expert on tropical diseases testified before the Senate yesterday that he warned anti-dengue vaccine maker Sanofi on the health risks of using the Dengvaxia vaccine in 2016, bolstering the government’s case against the French pharmaceutical giant and health officials of the Aquino administration.
Scott Halstead told the Senate Blue Ribbon Committee he even sent a video of Antonio Dans, a health expert, hoping that it could be presented during a Blue Ribbon hearing that same year.
Halstead said that Dengvaxia should not be administered to seronegative individuals, or people who had never been infected with the dengue virus.

Halstead, a dengue expert, said he published two articles in 2016 suggesting that blood tests should be conducted on recipients of Dengvaxia before the actual vaccine was given.
This was because of the health risks Dengvaxia could bring to seronegative individuals.
“My contention was the vaccine is safe for seropositive but dangerous for seronegative and you can discriminate between the two through test,” Halstead said.
He dismissed the claims of Sanofi that the vaccine would be safe for children nine years old and above, noting that such declaration did not fit biology of the human species.
Sanofi, he said, was aware of his study because the company responded and even published an answer. “They (Sanofi) said that they did not think there is enough data. And the contention of Sanofi is that there are more people benefited than hurt,” Halstead said.

“I was quite astonished and upset that this mass immunisation is going forward,” he told the senators.
He also said the press release of Sanofi on November 29 saying that the vaccine was effective in patients who had a prior dengue infection but might cause more severe disease otherwise, was based on the result of the test that he had suggested.
The Blue Ribbon Committee officially ended its hearing into the P3.5bn Dengvaxia controversy yesterday and would be recommending charges to be filed against persons involved in the mess, including former president Benigno Aquino.
In an interview after the hearing, Sen. Richard Gordon said he had yet to discuss the matter with members of the committee, but was looking at recommending charges such as dereliction of duty, negligence and violation of the procurement law.

“Definitely anybody that has anything to do with the speed, the undue haste, the wastage of money and above all the severe pain that has been inflicted by deaths, by the painful stress and experience now being faced by our people will be included,” he said when asked who would be included in the recommendation for the filing of cases.
Apart from Aquino, Gordon said, former Budget secretary Florencio Abad and health officials of the previous administration headed by Janette Garin would be included in the Blue Ribbon report.
Sanofi will be cited for conspiracy, according to Gordon, adding that the company’s desire to regain its capital was the reason it pushed Dengvaxia to the Philippine government despite the risks.
Gordon noted during the hearing that neighbouring countries Malaysia and Singapore did not purchase Dengvaxia when it was offered to them. “So this means that we were reckless,” he said.

A mother whose child was given the controversial Dengvaxia anti-dengue vaccine broke down as she expressed frustration over the alleged insensitivity of some doctors and the lack of information on the waiver she signed that allowed her child to be part of the government’s mass immunisation programme.
“What’s been happening to us, it’s not just the kids getting hurt, but also the parents. We are very stressed,” said Carolina Casejo at the resumption of the Senate hearing on Dengvaxia yesterday.
Casejo cited the alleged harsh treatment by doctor who, she claimed, hit her child with papers the doctor had. The child had been taking pictures and was warned before he was hit.
“I feel so hurt . . . I felt humiliated with the other parents and Dengvaxia victims there,” said Casejo who joined other parents whose children were inoculated with the vaccine.
Casejo said she did not get the name of the doctor but had reported the incident to the director’s office of the Philippine Children’s Medical Centre (PCMC) in Quezon City.

Dr Mary Ann Bunyi, PCMC executive assistant, apologised and told her that the hospital had obtained the name of the doctor, who would be subjected to disciplinary action.
Casejo also said that another PCMC doctor had diagnosed her child with Thalassemia, an inherited sickness of the blood that leads to anaemia. But she said she remained adamant that Dengvaxia was the cause of the complications to her child’s health.
She said her child developed cough and cold, and fever of 39.2 degrees Celsius one week after receiving the dengue vaccine. Casejo even showed a ledger where she claimed to have detailed the symptoms her child experienced.

“This is complete with what my child experiences every day. Every day I write them down, I count them.”
She said her child had also experienced anaphylaxis, a severe allergic reaction, three times from September to December.
She expressed her frustration over the lack of information on the waiver that she and other parents signed.

“The details were not complete in the waiver I signed,” Casejo said.
Gordon said it was this insufficiency of information from concerned government offices that was one of the major causes of the Dengvaxia controversy.
“Our people are on the losing end here. Because they were not informed properly, their children die. They lost without a fight. They do not know. It is the lack of information that killed the children,” he said.
“It is the right of the patients inoculated to be informed,” he added.
Parents of the children who were inoculated with the vaccine were also present, and became emotional as well.