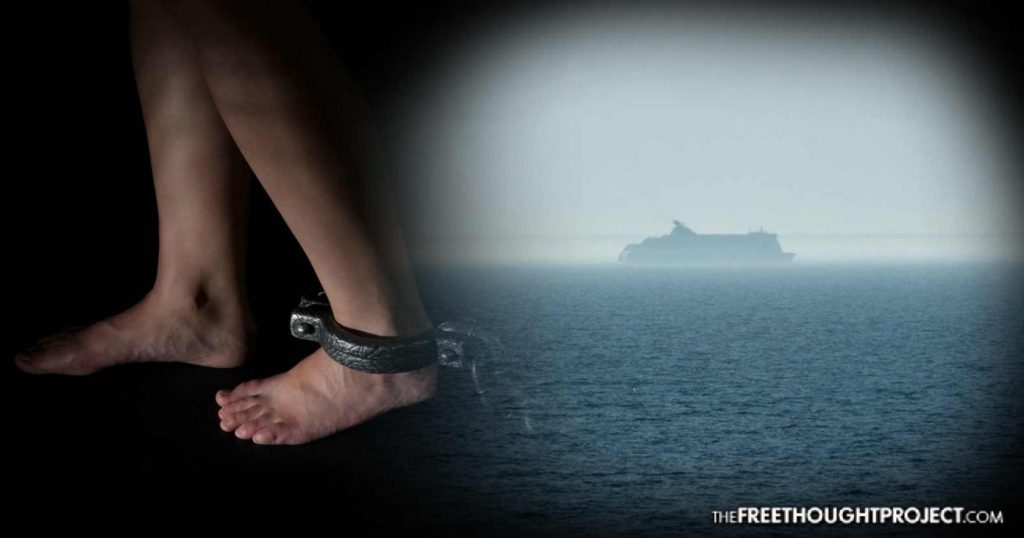 The war on drugs has produced the vilest police state one can imagine. From secret black site prisons—operating in Chicago—with no due process, to midnight raids in which babies faces are blown offby police grenades, attempting to stop Americans from self-medicating has proven to be a disastrous failure. Now, however, it seems to have gotten worse as an ad hoc US detention system has recently been discovered — floating in the Pacific Ocean in international waters as to exist outside the realm of the US justice system.

These secret prisons, floating in international waters, to avoid the US justice system, exist because, under the guise of protecting you from yourself, the US government spends billions on enforcing the failed drug war—all at the expense of freedom.

A jaw-dropping report from the NY Times exposes these prisons, dubbing them “floating Guantánamos.”

According to the Maritime Drug Law Enforcement Act of 1986, drug smugglers caught in international waters are considered to be committing a crime against the United States, even when there was no proof that the drugs, often carried on foreign boats, were bound for the United States. The Coast Guard was conscripted as the agency empowered to seek out suspected smugglers and bring them to American courts, the Times reports.

In their increasing effort to prove they are needed to stop the flow of drugs, the Coast Guard has continued to go farther and farther out into these international waters. When they capture these boats, the people on the boats—who are often indentured servants to drug lords trying to feed their families—are brought aboard these floating prisons and shackled to the deck outside, in the elements.

However, they aren’t shackled to the deck of a ship for a few hours or even a few days. These torturous waits can last for weeks or months, according to the Times.

The Coast Guard claims they can keep these folks in such torturous conditions because they aren’t under arrest until they get back to the United States. In the NY Times article, Seth Freed Wessler reported this story and covered the case of one person who happened to endure time on one of these floating prisons.

Wessler explained that Jhonny Arcentales, a fisherman who was paid to drive a boat South America and Central America, was caught up in one of these busts.

He is a fisherman from a coastal town in Ecuador and was having a particularly, economically, rough year and made a decision to take a job smuggling cocaine off of the coast of Ecuador. He really didn’t know all that much about what he was doing.

As he was driving the boat with an arbitrary substance deemed illegal by the state, Arcentales was intercepted by a Coast Guard vessel.

For the next 70 days, Mr. Arcentales and the other man he was detained with were held — always chained by their ankle to the deck of a ship or to a cable running along one of these large Coast Guard or Navy ships — for 70 days.

In an effort to keep you from having access to cocaine, the Coast Guard is kidnapping people trying to earn a living, shackling them to the deck of a boat in the elements, barely feeding them, forcing them to defecate in buckets and sleep in their own feces, essentially torturing them for months, until they get back to the US.

The Coast Guard has gotten away with this inhumane and horrific practice for years by claiming that logistics make it hard to get these people back. However, as the Times report notes, “when the Coast Guard has had to move people more quickly, they do. Very often, detainees are brought to port in one of these cutters, then placed in a hidden room in a helicopter hangar or in a room below deck and hidden there for the day while the Coast Guard cutter refuels or the Coast Guard crew get a bit of a break and then are brought back out to sea.”

Yes, the Coast Guard is actively hiding its prisoners so it can essentially keep them at sea indefinitely. Often times, the cocaine makes it back to the US well before the prisoners.

In the case of Arcentales, the cocaine made it back to the states 44 days before he did. For over a month, Arcentales and two other Guatemalans, Quijije and Payan, remained chained to the deck of their floating prison.

“I remember one time I asked the nurse officer if he could do me a favor,” Payan wrote later in a letter, “just shoot me and kill me, I would appreciate, because I cannot take this anymore.” As

day after mind-numbing day dragged on, hunger began to rival their families as their central preoccupation. Food logs from Coast Guard ships and testimony from Coast Guard officers show that on some ships, detainees’ meals consisted of only small portions of black beans and rice, on occasion with a bit of spinach or chicken. Arcentales says that he learned to eat slowly, to fool his mind into thinking the plate contained more than it did. The men watched the guards discard their unfinished meals into trash bags hanging nearby and devised a plan. “Someone would ask to be taken to the restroom so that we could try to reach the trash and take the food,” Quijije said in testimony. They would pass a piece of leftover chicken down the line, each detainee taking a bite and handing it to the next, until the bone was picked clean. After more than two months of detention, Arcentales says, he had lost 20 pounds; Payan says he lost 50. Time began to warp for them. “We could no longer endure living in such conditions for that prolonged period of time,” Arcentales wrote later in a letter. “It did not matter to us where they would leave us; we were desperate to communicate with our family.” The Coast Guard and the Department of Justice maintain that all detainees are treated humanely and with accordance to the law. The Coast Guard adds that it shackles detainees and conceals them while in port for their own safety and the safety of the crew.

All of this horrific torture and inhumane treatment is done under the guise of protecting Americans. However, much of this cocaine was never even destined for America, yet Arcentales and thousands of others are now rotting in federal prisons — after being senselessly tortured — all of which is at your expense.

Instead of realizing how entirely ineffective, barbaric, deadly, and insane the war on drugs has proven to be, the US government shows no signs of slowing despite public opinion on the matter rapidly shifting.

As long as the State continues to lock people in cages and try to cure America’s drug problem with the barrel of a gun, this horrific scenario will keep playing out like a broken record.

Matt Agorist is an honorably discharged veteran of the USMC and former intelligence operator directly tasked by the NSA. This prior experience gives him unique insight into the world of government corruption and the American police state. Agorist has been an independent journalist for over a decade and has been featured on mainstream networks around the world. Agorist is also the Editor at Large at the Free Thought Project, where this article first appeared. Follow @MattAgorist on Twitter, Steemit, and now on Facebook.