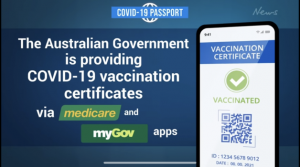 Vaccine and immunity passports entered the vernacular early in 2020. But that was just a conspiracy theory remember?

Around this time last year (March/April 2020) the term ‘Immunity Passport’ entered the vernacular. Mainstream media outlets around the world were floating the idea with the masses that there should be some way to prove that you a) don’t have COVID-19, or b) had it, recovered and now have immunity to it.

Then as the vaccine race escalated, immunity passport quickly morphed into ‘Vaccine Passport’. The propaganda campaigns went into overdrive with countless reports that a vaccine passport will be needed in order to ‘re-enter’ society and get things back to ‘normal’. Now they’re promoting calls to prove a) COVID-19 Vaccination Status or b) negative COVID-19 test results.

Governments around the world went in to overdrive trying to create the infrastructure for the vaccine passport systems.

Governor Cuomo in New York took their COVID-19 Passport system, Excelsior Pass, live on April 2 this year. After less than two weeks it’s been heralded as a massive failure.

Here in Australia the propaganda campaign is ramping up. Videos like the one below are now surfacing. They describe a dystopia in where in order to travel on a plane you have to prove your COVID-19 Vaccination Status or Test Status.

Although met with massive backlash from the public, the airline QANTAS announced it will be trialing a digital vaccine passport system. They hope to force all passengers to provide the Vaccination Certificate in order to fly with them anywhere.

The implementation and acceptance of this Vaccination Certificate system is the first hurdle our social engineers have to overcome in order to reach their goal of total Chinese style social credit systems.

Parts of China have had the Social Credit system in place for a few years with devastating effects for the people. The PRC Government absolutely loves it. It is ultimate control of its citizenry.

These “Vaccination Certificates” are the beginning of that system here in Australia and most other parts of the world. Once it’s in, it’s game over. We will never get back the basic freedoms and rights once we relinquish them.

Please watch the video below by Naomi Wolf. She explains it well as she’s a tech business owner and is extremely aware of what ‘Vaccine Passports’ really mean for us.