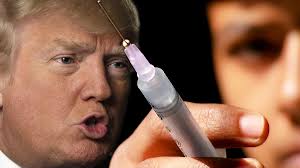 In the last few days of August, Dr. Andy Wakefield stood before a room of people and hinted about a meeting he’d recently attended.

Wrapping up his speech he warned the crowd, “This is a one issue election: the future of this country’s children. Use your vote extremely carefully. There is one person—whatever else you may think about him—who has expressed that he knows that vaccines cause autism and that vaccine damage is real. He would never allow mandatory vaccination. I had the privilege of meeting with him to discuss this precise issue. He is on our side. We will not get a second chance. Within two years of Hillary Clinton getting in, there will be mandatory adult and childhood vaccination across the entire country.”

By that time it had been a year since Donald Trump stood on a stage with Dr. Ben Carson and Dr. Rand Paul and the pro-vaccine moderator, Jake Tapper, asked, “Should Trump stop saying that vaccines cause autism?” in a live television attempt to turn Carson against Trump.

Instead, Trump jumped in and said that the autism epidemic is out of control, and that he is in favor of smaller doses of vaccines over a longer period of time. He said that he knew of a two and a half year old child who was vaccinated, developed a high fever, and became very sick and autistic.

Then Dr. Carson backed him up by saying, “It’s true that we are probably giving way too many in too short a period of time,” and Dr. Paul chimed in that he was also concerned about the vaccine schedule.

That backfire launched a week-long pharmaceutical-funded media attack on Republicans as being ignorant anti-science ninnies unqualified to have an opinion—despite two of them being medical doctors. But in typical fashion, because Trump didn’t continue to raise the vaccine issue at every tour stop, people on our side began to say that he didn’t care, that he’d walked back his statements, or that autism wasn’t even on his radar anymore.

I want to share a few things with you about Andrew Wakefield’s meeting with Donald Trump. Maybe I should have written this a long time ago, but I didn’t ask permission to write it from the people involved before yesterday because I know what it’s like to be given an opportunity conditioned on keeping things said off the record.

The team that visited Trump last summer says that he is very consistent in his position on vaccines. He has certainly not abandoned us. They specifically talked with him about vaccine-induced autism and they report that Trump undoubtedly knows that vaccines can and do cause autism.

Trump asked the type of questions that show the depth of his knowledge of the subject, such as how the current schedule came into being and how he can change it. He is already up to speed on what is happening. He alreadyunderstands the issue.

{Don’t forget, this is a man who tweeted The Thinking Moms Revolutionasking Jake Tapper and Sharyl Attkisson to report on the CDC Whistleblower two years ago.}

One of the team members pointed out that “America can’t be great again” if this is the direction we are headed with our children and it visibly impacted Trump.

The most important promise came at the end of their meeting when someone said, “Donald, you are the only one who can fix this.”

He will fix this.

Fixing this is not rocket science. Hell, it’s not even vaccine science. He will fix this. It is entirely fixable, and he appreciates our advocates lending their assistance in getting it done.

Now, before you accuse him of pandering, ask yourself what he would have to gain from pandering to the 1% of Americans who don’t vaccinate at all.

Friends, we have a direct route to stopping this madness. Can you imagine that for a second? Can you just imagine having vaccine education advocates getting face-time with the person who appoints the director of the CDC?

Read that again: the President of the United States appoints the director of the CDC.

{And despite what our loose-lipped lady law professor in California has to say about it, there is no Senate confirmation for the CDC director. Good thing she teaches young minds administrative law. Never trust a lawyer who can’t get a license to practice law.}

Trump asked for a follow-up with our side. They are giving him advice on how to help us.

Contrast that with Hillary’s autism action plan that failed to mention one word about autism’s cause or how to prevent it. Contrast that with her adviser who forbade her from mentioning “autism’s cause” in a speech, and who suggested she rephrase with how “autistic children’s brains develop” so that we don’t pretend for one moment that autism is environmental and preventable.

When I read that email I felt like autism parents are drowning right in front of Hillary, but by refusing to say the word “cause” any longer, she yanked the life preserver out of the water and turned her back on them.

Andy Wakefield gave him a copy of Vaxxed and Trump promised that he’d watch it right away.

Kudos to their success, but the Clintons are owned.  There is no denying that. Their lifestyle is funded in large part by the companies who profit off destroying our children.

Trump’s position on healthcare is that every American deserves access to high quality, affordable care, and not just insurance. He has said that Obamacare has failed on cost and quality. Few people would disagree with those statements on either side of the political fence. But I can understand if you disagree with Trump on immigration, accepting refugees, global warming, or whether or not Islam is a religion for many with a propensity for violence. I get that he’s said many shitty things about women with no regard for who was listening.

But Trump’s faults don’t equate with Hillary having a halo– entire books have been written by her former secret servicemen about what an intolerable human being she is. She gave a speech where she defended fracking and said that environmental activists need to get a life. Her own advisers would rathercreate a “progressive Islam” because even ignoring the violence of Islam’s current incarnation, they feel that the domination of women and the hate for gays, Jews and Christians just isn’t working out for the Democratic party. I’m not so sure there is much of a difference in many of the policies of America’s two-party system.

I personally know numerous people still enamored with Bill Clinton (no judgment here) despite his penchant for “dicking bimbos at home” (Colin Powell’s words, not mine), and they either refuse to vote for Hillary, or they’re doing it begrudgingly.

But the parent of a vaccine injured child has no business putting the nail in the coffin of generations to come.

If Hillary takes office we would have to find a way to pay the Clintons more than all of the pharmaceutical companies combined because Hillary is not — not publicly and not privately– concerned about stopping vaccine-induced autism in this country. No one has paid her to care.