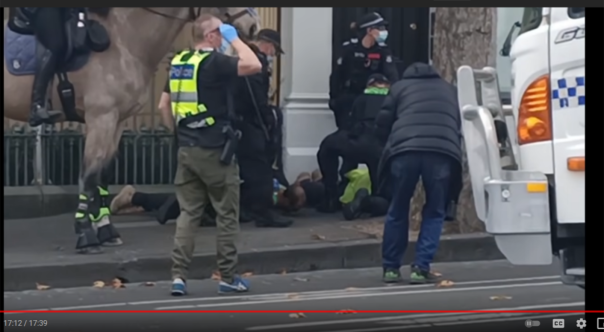 Nick Patterson and several friends on the footpath after being intercepted, pepper-sprayed and beaten by a squad Victoria Police thugs.

In the initial confrontation Nick Patterson schools a sergeant in the law as it applies to questioning and arrest powers.

Police swarm around a group holding an open-air church service in a park at Narre Warren. The pastor Paul Furlong had earlier been arrested.

VICTORIA Police have been caught on video in a vicious gang attack on a small group of protesters linked to a Christian activist group called John8.net. Members of the group had earlier held a swarm of cops at bay when they tried to “enforce” so-called health directives from the state’s chief of health fascism Brett Sutton.

Before the vicious assault Patterson and friends, equipped with phones and cameras and not wearing the supposedly mandatory masks, walked across a road into a mass of cops. This immediately prompted questioning by a sergeant about why they weren’t wearing them and where they had come from in an attempt to pin on them an infringement of the lawless and ludicrious 5km travel restriction.

But Patterson and his friends were not going to play ball with the lawless stupidity imposed by the corrupt Andrews-Merlino-Sutton Labor Party regime and their chief cop Shane Patton who, a few days before this outrage, was on the media using the deaths of officers to drum up public sympathy for “the force”.

Patton must have known his cops were going to engage in thuggery against protesters given night-time notices not to attend the Freedom Rally on Saturday.

In one of several incidents at Saturday’s Freedom Rally protest, Patterson gave police a brief lesson in law and how they were in breach of it.

He told them he legally did not have to talk with them, a well-established right, but chose to engage in conversation anyway, informing them of at least three major High Court cases in Australian law (e.g. George v Rockett, 1990) laying down guidelines on what police can and cannot do. Patterson stood his ground informing the sergeant he needed reasonable grounds and facts for suspicion of an offence in order to make an arrest.

Patterson also referenced New South Wales v Bradford James Robinson (2019) in which the High Court unanimously held that in NSW at common law, an arrest can only be for the purpose of taking the arrested person before a magistrate (or other authorised officer) to be dealt with according to law to answer a charge for an offence (“the single criterion”). Thousands of the legally dubious health directives and the infringement notices issued for them, have previously been dropped by Victoria Police.

Patterson further referenced the Victoria Police Act 2013, saying it was inconsistent for police to be enforcing government directives when they were defined as “constables at common law”. Police powers of arrest and questioning are clearly laid out in a Victorian Legal Aid booklet. The underlying principle is that police officer can only ask for a name and address if they have a reasonable belief you committed an offence or are about to commit an offence.

After Nick and his friends apparently convinced police they had every right not to talk to or supply their names and addresses without police acting upon reasonable cause they were ordered to move on. The group decided they would but were pursued by the same mob of dozens of cops across city blocks. Then suddenly, without provocation or resistance, the cops crossed the street and intercepted them, pepper spraying and beating them in the process. Patterson was taken away in an ambulance.

Next day, Sunday, Patterson sporting cuts and bruises to his head and his right arm in a sling, attended an outdoor service hosted by Narre Warren Revival Church whose pastor Paul Furlong has defied the lockdown orders. Furlong based this on the teaching in the New Testament epistle of Hebrews to “not forsake the assembling of yourselves together”. Furlong was arrested on Saturday night, also apparently under the false pretences of disobeying Sutton’s so-called directives.

On Sunday the church members and supporters gathered beside an sports oval near the Fountain Gate shopping centre for the service, but were surrounded by some 40 cops who slowly drew their circle closer to the worshippers, literally driving them out of the park.

Despite the blatant intimidation and violence, Nick Patterson’s initial confrontation on Saturday was a major win in the street protest battlefront against attempts by the Victoria’s dictatorship and its use of so-called directives enforced by arbitrary lockdowns and illegal and intimidatory police harassment.

* In the High Court case George v. Rockett, June 20, 1990, it was ruled (8) “When a statute prescribes that there must be “reasonable grounds” for a state of mind – including suspicion and belief – it requires the existence of facts which are sufficient to induce that state of mind in a reasonable person. That was the point of Lord Atkin’s famous, and now orthodox, dissent in Liversidge v. Anderson (1942).”