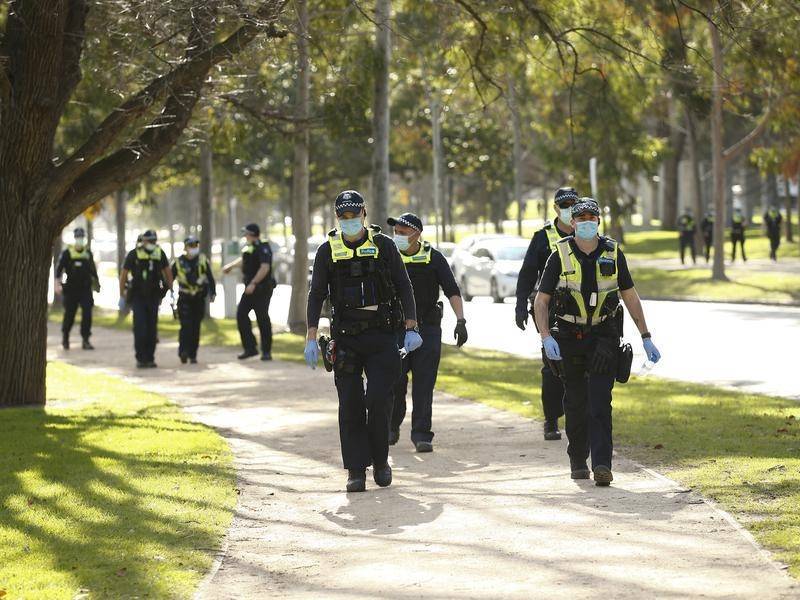 As part of new stage 4 lockdown restrictions announced this week, Victorian Premier Dan Andrews has cited harsher penalties for those found not to be following COVID-19 directions.

At the direction of health officers, authorities in Victoria can now enter any home without a warrant or permission, and take any action they deem ‘necessary’ to ‘slow the spread’.

Australia’s second-largest city is now subjected to some of the most extraordinary COVID-19 lockdown measures on the planet, in a move that will cripple the struggling Victorian economy.

Now, it has been revealed police officers can take any action they deem necessary to ‘slow the spread’ of coronavirus, including authorities entering homes without a warrant or permission.

According to reports, the state of disaster declaration empowers the police minister, Lisa Neville, to appoint police as ‘authorised officers’. When doing ‘spot checks’ on people’s homes, if the residents did not give permission for them to enter, police will be authorised to enter without a warrant.

The Public Health and Wellbeing Act 2008 states that authorities can close any premises and “without a warrant,enter any premises and search for and seize anything that is necessary for the purpose of investigating, eliminating or reducing the risk to public health.”

Authorities may also “…direct a person or group of persons to enter, not to enter, to remain at, or to leave, any particular premises for the period of time reasonably necessary to investigate, eliminate or reduce the risk…”

On Tuesday, 172 fines were reportedly issued for breaching restrictions were issued in a 24-hour period, totalling $250,000. This prompted ‘frustrated’ police to consider using the broad powers.

The reason the police now have these draconian powers is because the ‘situation’ in Melbourne has been upgraded from a “state of emergency” to a “state of disaster”.

The last time a state of disaster was declared in Victoria was in January of this year, when a huge swathe of it was literally on fire.

How can a 1.2 million-hectare bushfire that destroyed at least 200 homes warrant the same alert level as the deaths of age care home residents, all of whom were over 70 and one over 100?

This is an astonishing violation of civil liberties. Police officers should not be allowed to demand entry to a property without cause or due process.

They especially shouldn’t be allowed on ’public health grounds’, when the median age of Australians who have died is exactly the same as the nation’s average life expectancy — 82 years old.

The kind of restrictions now imposed on the lives of five million people in Melbourne would have looked harsh in 1950s East Berlin.

Victoria declared a state of disaster at 11:59pm on Sunday in an effort to ‘flatten the curve’ of the COVID-19 pandemic. This is despite already flattening said curve. It’s back again, to get revenge.

Andrews said ‘government modelling’ showed that without these measures, stage three restrictions would need to last six months. Can we see any of this modelling, Dan?

As if the first round of lockdowns wasn’t bad enough, Victoria is once again in the firing line.

But for what? Let’s take a look at flu statistics for 2019. Last year, more than 310,000 Australians were hospitalised with flu and over 900 died. By all metrics, that makes the flu a worse threat than COVID-19, but police weren’t granted Stasi-like powers during the flu season.

Millions of people weren’t confined to their homes and threatened with fines for not having a good reason for being out in the community. Australia is resembling a third-world dictatorship in 2020.

How can a politician in a free country even conceive of uttering a statement like that? Give me a break. In a free country, you don’t need a reason to leave your home, you can just go out. That is what freedom means.

Anyone who tries to tell you to sacrifice freedom for ‘security’ is seriously misguided about the consequences of human nature and the context of recorded history. Simple.

They can just pop ‘round anytime to make sure you haven’t had a neighbour over for a couple of drinks. How dare you threaten the country, you filthy health threat!

As anticipated, the ‘ultimate revolution’ is on still track, ladies and gentlemen. Continued international hysteria and a corporate-facist psychological operation being used to usher in a Brave New World Order. The Mind Virusfrom The Beast.

How did we get to this point? ‘I thought everything was almost over’, they say. A quick look beyond the spin reveals a clear path of deception once again.

The data behind the COVID-19 ‘pandemic’ was never reliable, with test kits being inaccurate, government policies inflating the death counts (including in Australia), and the media focusing solely on fear-based predictions that are repeatedly proven false.

Now, the establishment is once again making their move and the COVID-19(84) narrative is kicking back into gear, just as Australia was hoping to return to a sense of ‘normality’ (or so they were told).

A ‘second wave’ was always anticipated, and Victoria serves as ‘ground zero’ for this new chapter.

Let’s examine: At the end of May, Victoria’s new COVID cases were in the single digits. On 6 June 2020, the state recorded no new cases for the first time since March.

On 20 June 2020, the Victorian government announced $1,500 support payments would be given to those who were impacted by COVID-19 or even knew somebody who was.

Targeting vulnerable citizens with payments, who took the bait, subsequently leading to the lockdown of ‘the towers’ in North Melbourne after cases emerged. Testing was soon opened.

The Victoria government ramped up testing and, predictably, it has seen an uptick in cases. Next thing we know, cases began to spike ‘out of control’. Hundreds per day, correlating with new tests.

This week, things have finally reached a tipping point, now ‘spinning out of control’. All justified on cases, rather than death rates. Forget international wars of the past, it seems all it would take to bring this great country to its knees was an increase of runny noses during flu season.

Just as the country reached the ‘final stages’ of lockdown restrictions, new spikes in ‘confirmed cases’ served as the catalyst for a new paradigm of propaganda.

Authorities have used psychological warfare throughout history to manipulate public opinion, gain political advantage and generate profits. Western governments have engaged in such tactics in the ‘war on terrorism’ as well as in its predecessor, the ‘war on communism’.

In both cases, state-sponsored terrorism and propaganda were used to distort the public’s perception of the threats, leading to increased governmental control of society and huge financial benefits for corporations. It appears that the same kinds of tactics are now being used on everyone.

The scientific religious cult driving the coronavirus scare has a history of unethical behaviour, fabricating statistics and hyping pandemics to push vaccinations.

They appear to not just be seeking long-term profits through means of deception, but also hope to achieve the implementation of a new world, highly controlled society.

When will Australians say ‘enough is enough’?