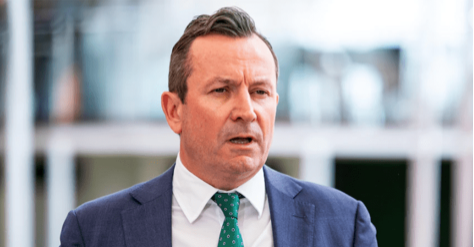 West Australians who refuse to get vaccinated against COVID-19 in vulnerable remote areas could find themselves subject to localised travel bans and other restrictions.

The state is looking to re-open its interstate borders in late-January or early-February, subject tothe state achieving a 90 per cent full vaccination rate.

Despite this, Premier Mark McGowan has announced localised restrictions could be introduced in regions such as the Pilbara unless the take-up improves.

Vaccination rates in regional WA have remained low in some parts of the state, particularly in the Pilbara, where just one in three people have received two doses.

Authorities say they are ‘keeping a close eye’ on communities in the state’s north, particularly in light of the ‘growing outbreak‘ in the Northern Territory.

Pilbara is home to a number of remote Aboriginal communities.

Across the entire state, only one in three Indigenous peoples are fully vaccinated.

For this personal medical decision, the Premier wants to shut off these communities.

All for their ‘safety’ and ‘security’.

“Those regions that aren’t at high levels of vaccination, we’ll have to put in place special rules around them,” McGowan told reporters in Karratha this afternoon.

“It’s most likely going to be that only people who are double-dose vaccinated will be able to come into those regions.

If you leave the region and you’re not double-dose vaccinated, you won’t be able to come back. That’s basically the rule we have to work towards.”

Remember when Scott Morrison first announced “special rules” that would soon be coming for the unvaccinated back in July? Look where that has ended up.

To deal with this ongoing ‘crisis’, WA Health today said it had implemented a wastewater surveillance program in the East Kimberley, with samples to be collected at Kununurra and Halls Creek.

Will these tests turn up more false positives like Victorian regions did to start their last lockdown?

Once again, further divide and conquer — now coming for Indigenous and remote communities.

This isn’t all, however.

Not only are plans floated to isolate the community from the rest of the state, but the government has also launched a five-week campaign aimed at boosting vaccination rates in the region.

Perhaps the most troubling part of this operation was revealed by the police chief this afternoon.

‘Vaccine Commander’ Chris Dawson announced that health authorities would be ramping up efforts to improve the state’s Indigenous vaccination rate over the next five weeks, including going door-to-door in communities with low immunisation figures.

“Rather than expect people to come to places such as health campuses, we know that some groups are staying in their homes.

“So that means that we will be going door-to-door, and if they don’t take it up the first time because they’ve got some doubts or lack of information, we will sit down and engage with them.”

‘Engage with them’ while going door-to-door to boost jab rates?

What could possibly go wrong in this scenario?

“In terms of the Pilbara, it’s quite significantly behind,” Dawson continued at the conference.

“I don’t want to speculate on exactly when the Pilbara will achieve 80 per cent, but we want to achieve it before the new year is out.”

But.. what if.. the residents don’t want the jab, commander?

How exactly will you ‘achieve’ this while you are there?

“That means really strong, respectful relationships, where you’re going to sit down with them, talk to them, explain the misinformation that’s about and dispel some of those myths.”

The WA Thought Police are coming to your homes, Pilbara. Literally.

If the authorities tell you that 2+2=5, what will you say in return?

At least this ‘commander’ didn’t tell citizens to “choose their poison” like Victoria’s chief did.

Not as open with their language in WA, but equally as pressing of a situation.

Does this story sound similar to scenes we witnessed in Italy at the beginning of the pandemic?