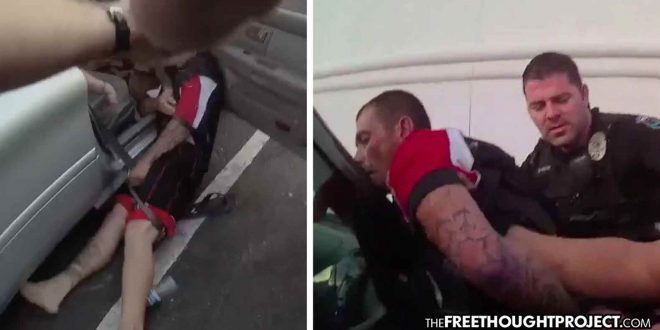 Glendale, AZ — As TFTP reported back in February, disturbing bodycam video was released which showed Arizona cops tasering a man 11 times, including on the testicles, as his horrified family scream for them to stop. The police are now being sued for “excessive force and torture” yet the cop involved has been back on duty, having faced no accountability. However, all that may soon be about to change.

According to ABC 15, the state police board unanimously voted Wednesday to initiate disciplinary proceedings against a Glendale officer who kicked a handcuffed man in the testicles, pulled down his pants, and tasered him in the groin.

What’s more, that officer, Matthew Schneider also stands accused of falsifying the reason for the stop that sparked the horrifyingly violent encounter in the first place.

According to the report, if Schneider is found to be in violation — which by any rational person’s view, he is — the Arizona Peace Officer Standards and Training Board (AZPOST), who opened the investigation, will revoke his license. Hopefully, this cop loses his law enforcement certification and hopefully he goes to jail as the video you are about to watch below is one of the worst we’ve ever reported.

The nightmare torture scenario began when Glendale police officers approached a vehicle for an alleged turn signal violation in July 2017. It would later be revealed that officers had no proof of any signal violation as they couldn’t see the car, which means they likely fabricated the violation just to harass this family. Johnny Wheatcroft was in the front passenger seat, while his wife Anya Chapman and their 11 and six-year-old sons sat in the back. A friend of the family was driving.

Officers Matt Schneider and Mark Lindsey asked Wheatcroft for his ID and he inquired why he had to show it, as he was not driving the vehicle. According to Arizona state law, because Wheatcroft was a passenger in the vehicle, he had no legal requirement to show his ID. But this cop couldn’t have cared less about the law.

Police then falsely accused Wheatcroft of stuffing something in his backpack, and, after pressing the taser against his arm and telling him to “relax,” Schneider twisted Wheatcroft’s arm behind his back and pulled him from the car while still restrained by his seat belt. The entire time, Wheatcroft never resisted, but he was still wrapped around the car’s seat belt which made the sadistic officer apply even more force.

The officer began tasering him when he was half out of the vehicle, before they pulled him to the ground and continued to tase him. Even after Wheatcroft was dragged on the ground towards the back of the car, his feet remained entangled in the seat belt. His older son leaned into the front seat to open the belt to free his father, prompting Schneider to shout at him, causing the boy to burst into tears.

Glendale police said in a statement that Wheatcroft “exhibited verbal non-compliance by refusing to identify himself and failed to obey the officer’s instructions.”

Horrifyingly, Schneider is next seen pulling Wheatcroft’s shorts down and placing the taser on the handcuffed man’s testicles. The lawsuit filed by the couple reports Schneider tased his testicles and perineum. He then placed the taser on his penis and said, “You want it again? Shut your mouth. I’m done f*cking around with you.”

But it wasn’t over yet, another officer held a handgun to his head as Wheatcroft was kicked in the groin by Schneider. The entire scene looked like something out of a Hollywood film. Sadly, however, it was very real for Wheatcroft and his wife and children.

ALSO SEE: A disturbing video of a home invasion by police captured the moment cops illegally entered a home, attacked and choked an innocent child.

According to the suit and the officer’s own admission, the officers used a “drive stun” method, in which the taser is pressed against a person before being fired. Glendale police also released a 30 second CCTV video of the incident taken from a distance.

The pair were arrested and charged with aggravated assault and physically resisting arrest. They were both in jail for months as they couldn’t afford bail before Chapman pled guilty to a lesser charge so she could be released to look after her children.

Wheatcroft’s charges were eventually dismissed by the Maricopa County Attorney’s Office after prosecutors saw the bodycam video which proved his innocence.

Below are the key discrepancies highlighted by board staff about Schneider’s role in this torture:

The board’s findings and what the Glendale police found were in stark contrast. After the original incident in 2017, Schneider was suspended for just three days for the level of force used and then returned to duty. As you watch the video below, remember that this horrifying event was carried out by men sworn to protect and serve, who cared not about the rights of a father or the lives of his children.