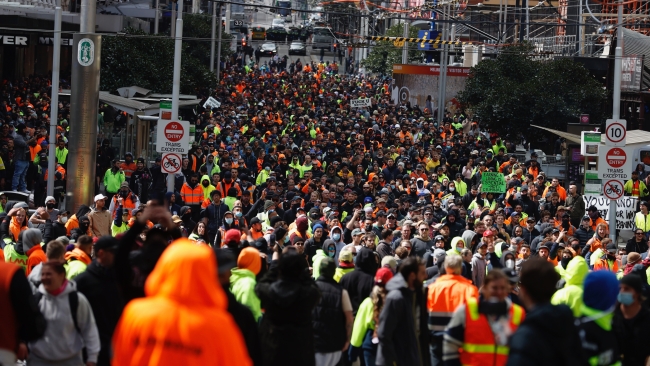 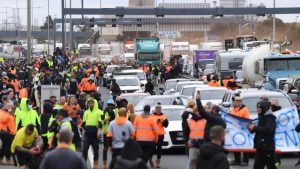 After dramatic scenes yesterday in the heart of Melbourne after the CFMEU turned its back on members of the union, protesters stuck to their claims of returning once again today.

Following the shutdown of construction industry for two weeks, a larger crowd descended upon the city, marching up and down for hours before taking their message to a busy highway.

TOTT provides readers with the full timeline of events below:

Demonstrators began gathering early once again in the same location as yesterday.

They begin chanting “freedom” and “f**k Dan Andrews”, as the crowd slowly grows:

At the same time, police form a line at CFMEU headquarters again to block the protesters.

They were in the area early to avoid scenes like those witnessed yesterday:

The media would have you believe the crowd is entirely made up of ‘right-wing, neo-Nazi extremists’. Setka and the mainstream presstitutes continued to drive this narrative home today.

While crowds were gathering this morning, Bill Shorten appeared on TV to spill a bunch of unfounded claims, calling the group “man-baby Nazis” and “rent-a-crowd” protesters:

Is Bill Shorten reading a script?

Either way, the dinosaur media desperately tried to run with these claims. However, a quick look at the crowd on the day dispels this myth perpetrated by the establishment:

Police fire on crowd to disperse..

Some in the crowd put their hands up, chanting “don’t shoot”.

The media are still reporting the crowd as ‘a few hundred people’ at this point on TV.

Marching through the city..

The large group (much bigger than yesterday) began marching through the city son after, chanting and singing, as they begin heading down to Parliament House:

A sea of Hi Vis uniforms take over the streets.

Any respect left for the media has vanished..

Speaking of the media, as the crowd began to march, Channel 7 reporter Paul Dowsley was hit in the back by a can thrown by a hooligan. Trust in the media will never return at this point:

The large crowd reaches Parliament House after a short walk, where more riot police are waiting for the crowd on the steps of the building. A standoff occurs, with protesters chanting “every day”.

From here, the crowd return back in the direction of Flinders St Station, walking up and down the street for about half an hour before returning back to the CFMEU headquarters.

Once again, police are waiting for the crowd, so they decide to take a different approach.

The group reaches their new destination, taking to the busiest highway in Melbourne to get their message across, as they march towards and across the West Gate Bridge:

Lines can be seen as far as the road stretches, as the group shut down traffic:

They didn’t have to, Dan Andrews did that for them by mandating a two week strike.

Time to sing and dance..

When reaching their destination on the West Gate Bridge, protesters take the time to enjoy the fun things in life after being locked down for longer than the entire world. A foreign sight in 2021.

Does this look like a domestic health terrorist group to you? Violent extremists?

While this dancing was occurring on the bridge, 3AW Melbourne — the station that had John Setka on yesterday to give comments that instigated the crowd — were doing their best to spin the scenes:

This caption would lead you to believe that a full scale riot has been occurring all day, with crowds tearing up the city and acting like thugs. You have seen the story to this point, however.

You can judge this bold propaganda by this radio station for yourself.

The protesters continue walking, before being met by riot squad again — who have arrived on the highway and begin firing to disperse the crowd. The group begins heading back to the city.

Protesters soon disperse off the highway.

After 7 hours of action, it seems like they are calling it a day.

Some protesters remain in the city. Police have formed a massive barrier around CFMEU.

A few arrests have been made for those who have stuck around the area:

As the protests began to wind down, Dan Andrews condemns the protests from happening, while praising those who remain at home following strict lockdown guidelines.

Dan says: “There’s no excuse for the terrible behaviour we have seen over the last two days”.

You’re right, Dan. There are NO excuses for loss of freedoms and no excuses needed when exercising the important democratic right to protest in a first world, Western nation.

As for the behaviour being ‘terrible’, well, the footage speaks for itself.

Protesters have vowed to return “every day” until their demands are met.

Not thugs, ‘Nazis’ or terrorists, but hard-working men and women, looking for their freedoms.

Stay tuned to TOTT News for further updates on this new movement.