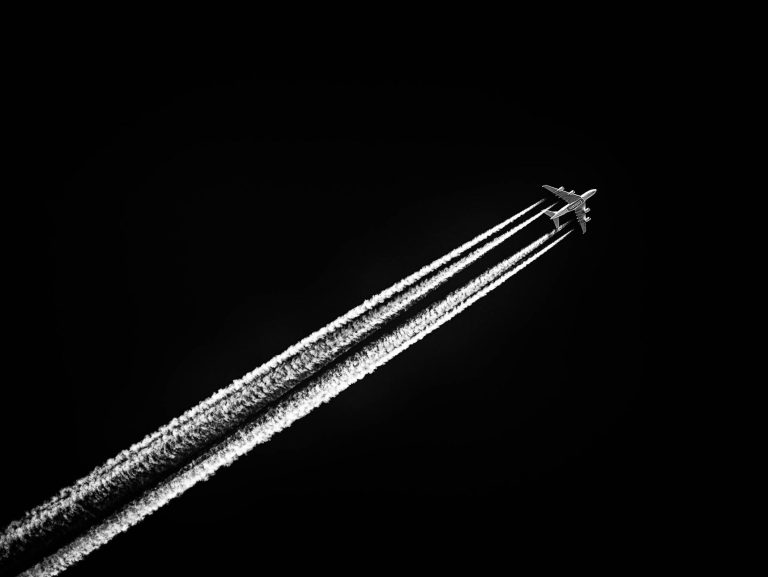 In the mid-1990s, many Western countries began to notice unusual, persistent and spreading condensation trails generated by high-altitude jets.

By the late-2000s, the phenomenon was observed by millions of people and became known colloquially as “chemtrails”, with many people believing that a significant percentage of each trail consists of deliberately-released chemicals.

But what is really going on?

Dr. T.J. Coles examines military sources and public records to uncover how the ‘chemtrail’ debate may indeed be a psyop cover for larger operations.

They are typically triggered in the stratosphere (10-50 km or 32k-160k ft) when water droplets form on the soot and exhaust from high-altitude jets (nucleation) and when the atmosphere is supersaturated with ice crystals.

As we shall see, military experiments have attempted to generate contrail-cirrus in non-supersaturated conditions, making them hard to distinguish from non-military contrail-cirrus and natural cirrus.

This is different from so-called chemtrails, because it is mostly conducted in public and does not usually involve making cirrus clouds from jet contrails.

Rather, most deliberate and open weather modification involves light aircraft, not high-altitude jets, releasing chemicals such as silver iodide and dry ice.

Public debate is polarised over trails.

Half of those who notice trails think that persistent, spreading trails are normal and mainly consist of ice (contrails). The other half thinks that trails cannot persist and spread without significant volumes of chemical additives (chemtrails).

This debate continues even to this day. But could it all be part of the agenda?

The polarisation of public opinion has benefited US military operatives.

As we shall see, since the 1990s, they have experimented with chemical-based contrail-cirrus by generating them among normally-occurring contrail-cirrus.

But for what purpose?

After the Cold War, the US military sought to dominate the electromagnetic (EM) spectrum, which carries the information necessary for warfighting (e.g., encrypted messages) and the US-led global economy (e.g., WiFi).

But because EM waves pass through clouds and are affected by weather, the military’s EM operations cannot be separated from weather modification.

When the military chooses to disrupt an enemy’s communications system, one option is to generate chemically-stimulated contrail-cirrus over the desired area.

Infrared (IR) is an important part of both contrails-cirrus and military communications. IR is a spectrum of heat and light invisible to the human eye and used by militaries for surveillance.

Unlike civilian cloud seeding, the production of chemical clouds (e.g., barium) was typically a military operation and previously confined to the ionosphere, which is a layer above the stratosphere.

Satellites (point B) receive information from ground sources (point A) and relay them to other ground stations (point C). If a chemical cloud can be generated in the stratosphere, it can (depending on the atmospheric conditions) passively disrupt the satellite’s function.

Websites like Wikipedia and Metabunk point to the “fictional representations” disclaimer on  a 1996 US Air Force document that advocates for a particular military doctrine called “owning the weather” (OTW).

But the document in question may have been promoted as part of a military disinformation campaign precisely because it includes the phrase “fictional representations” and can therefore be dismissed as a ‘concept paper’.

However, OTW concepts can be found going back for decades.

In the real world, references to OTW can be traced to at least as early as 1994 when the US Army Research Laboratory’s Battlefield Atmospherics Conference included a presentation by military meteorologists, Richard Szymber and the team.

OTW, the authors argued, would be financially justified because of its use in times of peace as well as war.

OTW envisaged building an infrastructure of sensors, weather satellites, mobile stations, and software that could be integrated across US military forces.

In terms of using weather (i.e., modified contrails as we shall see), OTW includes “elements of concealment and surprise, by predicting weather conditions and their effects along planned flight paths and loading zones.”

According to the SPACECAST 2020, “desired end state[s]” include “creat[ing] a weather patternthat obscures your military movement from the enemy,” specifically with “solid, low overcasts.”

Others can “modify refractive indices enough to influence radar or radio transmission.”

It is here we begin to see the larger picture behind weather operations.

“The Army Research Laboratory is working with the Army Corp of Engineers to introduce realistic environmental elements such as haze, fog, precipitation, and battlefield obscurants into such scenes for the Battle Labs.”

In the same year, the Battlefield Atmospherics Conference was hosted by the Army Atmospheric Sciences Laboratory. According to the proceedings:

The Executive Agency’s remit included: “The temporal and spatial state of the atmosphere” from the ground to the surface of the Sun.

In the same year, the Air Force Phillips Laboratory published the proceedings of its cloud physics conference. Chapter Six is dedicated to contrails and cirrus clouds. One of the scientists was Dr. Arnold A. Barnes of the Phillips Lab’s Geophysics Directorate.

Sub-visual cirrus clouds reduce the detection range of Infrared Search and Track and the range of the US’s Airborne Laser. A possible solution was removal of “excess water vapor forecast for the upper tropopause.”

The Space Based Infrared System (SBIRS) is a multi-satellite constellation designed to conduct regional surveillance. Corporate contributors noted that SBIRS is undermined by contrails.

“Clouds present a persistent and unpredictable source of clutter which can be the main degradation in the target detection process.”

Carbon black dust is soot. Because it is dark, soot—particularly the carbon nanotube—absorbs heat. Because the particles are small they can act as chemical additives to afterburner jets to stimulate contrail growth.

The notorious Project Popeye (1967-72) was a US military weather modification programme over Vietnam by the US. The document reveals that carbon black dust was used.

The cited “risks” associated with using chemical additives include “[c]reation of submicron particles,” which are hazardous for human health. The document hoped to have tests completed by the year 2001.

Dr. Barnes later confirmed that his team tested the technology for making holes in clouds: “Research conducted at Hanscom Field, Massachusetts blackened the inside of our C-47 before the dispersal technique was perfected.”

The evidence presented here confirms that elements of the US military wanted to field-test and make operational contrails modified by chemical additives.

The US works with allies all over the world. It is not clear if other countries have OTW programmes or whether US, or related forces or contractors, are experimenting in foreign airspaces.

America’s enemy China, for instance, has a military weather modification programme, but no government has admitted using modified contrail-cirrus for weather, climate, or electromagnetic operations.

Information dominance through electromagnetic manipulation and weather control are indistinguishable because the clouds that disturb military and civilian communications also affect temperature, sunlight, and precipitation.

The debate around “chemtrails” is as toxic as the chemicals in use.

Divisions between those who see no conspiracy and those who claim that every trail is a chemtrail only serve the military’s agenda.

There is a much bigger picture going on here.