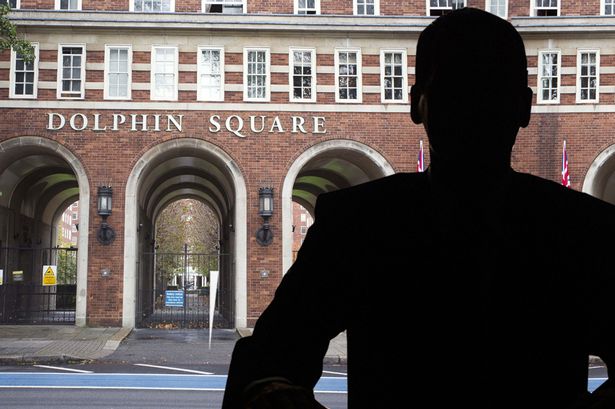 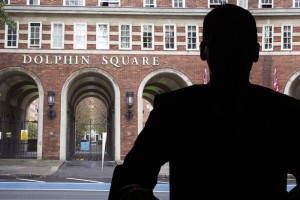 The new witness has told police a FOURTH youngster – this time a girl of 15 – may have been murdered by a VIP abuse ring which included politicians and a TV comedy star.

The new witness has told police he watched the teenager being taken into a ­terrifying “medical room” by a senior Tory MP – and never saw her again.

The sickening events are said to have taken place at London’s notorious Dolphin Square flats in the 1990s, the Sunday People can reveal.

He fears the teenager may have been killed by a brutal sadist acting out his horrific fantasies.

It would make her the fourth reported murder victim of a Westminster-based pervert ring, some of them household names.

The witness told the investigative website Exaro that he was himself abused while in his teens by prominent politicians and a famous comedian at the now notorious Dolphin Square complex in central London.

We are calling the man Darren, ­although that is not his real name ­because he lives in hiding, fearing for his own life. He is the third alleged victim of the gang to come forward.

Darren told us: “I would never have gone to those parties willingly. It was fear that led me to Dolphin Square.”

Recalling the night in 1993 he ­believes a girl died, he said: “I ­witnessed a senior Tory politician go into the medical room with a girl who I know was 15.

“This was a bedroom containing a hospital-type bed with shackles, gimp masks and a tiled, washable floor.

“She was 15 and in care. I didn’t know her name but had been bumping into her for years at paedophile parties. I had been trafficked for sex since I was a young boy, initially by my father.

“She had a smashing smile and wore braces on her teeth.

Darren has identified the exact apartment in the luxury Dolphin Square complex where he claims abuse parties were held while he was a teenager.

A former Tory cabinet minister ­already named to police by another alleged abuse victim, a Labour minister, and the famous TV comedy actor are among well-known faces he says were at Dolphin Square in the 1990s.

Darren claims he was driven to sex parties by the notorious paedophile Peter Righton, a former government adviser who had been recently fined for having indecent images of boys.

Righton would collect Darren and other boys from children’s homes in Suffolk and drive them to London in a luxury car, complete with leather seats and electric windows.

At Dolphin Square they would go to a four-bedroom serviced flat that had been rented out.

He recalled: “Guests would be standing around, chatting and drinking. There would be women there but they would leave before any sex took place.

“The attitude seemed to be that they would leave early so the boys could have their fun.”

Darren said that there were “very powerful” people at the gatherings. He went on: “They stood out a mile. I saw a former Labour minister at one party.

“They were very protective of their jackets. I think they were worried the boys would steal their wallets.” 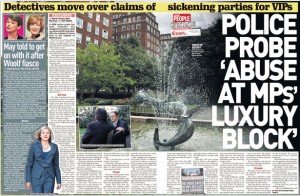 Darren claimed violation and ­humiliation inflicted on youngsters at Dolphin Square ­became a familiar routine to him.

He said: “This Tory ­cabinet minister always insisted I should be presented to him with ladies’ underwear on beneath my clothes.

“The game he liked to play was that he would pretend he had spotted that I was wearing the lingerie.

“He would tell me I was a naughty boy for turning him on and take me into a bedroom and punish me.

“I was spanked with a bamboo cane that he brought with him, which was painful. I was then sexually abused.

“He liked boys to dress up in lacy women’s underwear. He would make a game of it.

“The minister would be accompanied by a minder who stayed outside while I was abused.”

The Dolphin Square apartment had three rooms ­specially fitted out and decorated to cater for the tastes of party guests, Darren said.

He claimed the spanking ex-minister preferred a ­bedroom known as the “leopard room” because it had a leopard skin rug.

Another was known as the “gay room” because it was “flowery and ­effeminate”.

Darren claimed that in this room he was forced to give oral sex to the famous comedian. He said: “At first he was an interested spectator at the parties but then decided to take part.

“He was much kinder and more considerate than the others but it was still unpleasant.”

The worst of the three rooms was the so-called “medical room”.

Darren said: “This was the bedroom you did not want to be taken into. Fortunately, I was never taken in there but I remember one boy who did.

“He had been dressed up in tight leather shorts and went in with a senior Tory politician and some other men.

“I met him afterwards and he told me he had suffered humiliation too vile to describe and was then beaten up.”

Darren said the brutalised boy was under 16 at the time.

He recalled that traumatised children would gather in the kitchen at Dolphin Square to ­comfort each other after their ordeals. He admitted he was given £50 each time he attended a child abuse party.

But he insisted he only went because evil Righton forced him to. He said: “I would never have gone to those parties willingly – it was fear of Righton.

“One occasion when he attacked me stands out. It happened after I was taken into a bedroom with the famous TV personality and Peter was driving us back to Suffolk.

“I kept saying the name of the comic character played by the actor and saying that he was at the party. Peter kept saying, ‘No he wasn’t.’

“Then he suddenly swung a tremendous punch, while still keeping control of the car. It hit me flush on the chin and I may have passed out. It was a warning to keep my mouth shut.”

Darren was interviewed over three days by Met Police detectives and named his abusers. His account bears chilling similarities to allegations by a victim known as Nick, who claims three abused boys were killed in the 1980s.

His evidence is being investigated by Scotland Yard’s Operation Midland.

Officers have spoken to the families of two lads, Martin Allen and Vishal Mehrotra, who vanished in London.

Among those named by Darren is the recently convicted paedophile Charles Napier.

Darren says Napier abused him when he was 15 at Righton’s home. Righton ­ordered Darren to give Napier oral sex and when the horrified lad refused he was beaten until he complied.

He added: “I was kicked and punched in front of Napier, who stood there smirking. I had no choice and so I did as I was told. I was ordered to have sex with Napier on two other occasions.”

Napier, 67, is the half-brother of Conservative MP John Whittingdale.

The former treasurer of the Paedophile Information Exchange, Napier was jailed last month after pleading guilty to 31 counts of indecent assault against boys as young as eight at a school where he worked.

Darren continued: “Peter abused me repeatedly when I was 15, as well as forcing me to have sex with other men.

“By the age of 16, I was no longer to his taste, he liked younger boys. But he still trafficked me around.

“I was 17 when Peter began taking me with other teenagers to Dolphin Square. I am sure he was making a mint organising paedophile sex parties.

Righton, who died in 2007, was one of Britain’s leading specialists in child care – but was also a founder of the Paedophile Information Exchange.

Darren’s testimony directly supports a claim made in Parliament by Labour MP Tom Watson, which linked Righton to a VIP paedophile ring.

And it adds to a picture of abuse at Dolphin Square first revealed by Exaro last July.

Read more on this story with our investigative partner Exaro HERE

The Sunday People has led the way on smashing the high-powered network of VIP paedophiles since the story broke more than two years ago.

In October 2012, campaigning Labour MP Tom Watson stood up in the Commons and called on Prime Minister David Cameron to investigate a paedophile network with “links to the heart of the UK establishment – including 10 Downing Street”.

Since then, this newspaper has worked tirelessly to get to the truth.

Last year, we revealed the explosive testimony of the witness known as ‘Nick’. He went to police with claims about three possible murders linked to the VIP paedophile ring.

A survivor of abuse at the now notorious Dolphin Square apartments in central London, he alleges he saw three deaths between 1979 and 1982.

One of his accounts details a murder he claims to have witnessed at a London townhouse in 1980.

Two other men have since bravely told their tales, including Darren today.

There are many similarities between their memories and since we published our story, Scotland Yard has stepped up its investigation. It called a high-profile Press conference to encourage more witnesses to come forward.

Officers are re-examining 200 case files relating to children who went missing during the period.