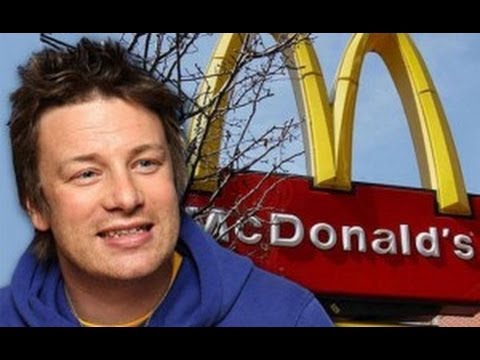 Why is Jamie Oliver who billed himself as a pro-organic food activist teaming up with GMO pushers Bill and Melinda Gates?
Immediately I’m struck by a few oddities as I watch Jamie Oliver’s scripted video where he has some new strange bedfellows. Namely Bill and Melinda Gates (from now on we’ll just refer to them as BM Gates) The questionable duo need no introduction, but their foundation proudly supports vaccines (even Ebola and Zika, ugh) and genetically modified foods for all.
The first oddity is that Jamie is obviously reading off a teleprompter.
I wish someone would have bothered to attach the thing to the camera, as it looks like he’s looking off to his left for the entire script. Also he seems a bit nervous. Wonder if some goon for the Elitists is holding a gun to his head? Oh I kid, I like being a conspiracy theorist sometimes, so I can’t help but wonder, even if I’m only half joking.
The other weirdness that gets to me is that yes, he’s supporting two of the world’s richest people who openly support GMO’s.
But it was Jamie himself who said he says NO to GMO’s, even in this video…
(which is less scripted and more natural). He talks about the “Massive Damage of GMO farming” and how detrimental it is to our health.  The thing is, judging by how Jamie has looked in later years, it looks like he might be saying yes to GMO’s, GMO pizza, GMO cookies, maybe even a GMO cake or two. But seriously, I’ve struggled with my own weight issues so I’ll stick to picking on someone my own size.
I just cannot fathom how the guy we all love, who is the voice for the children on improving school lunches, eating healthier, saying no to GMOs, can team up (voluntarily with no gun to his head) with two of the most hated people in the natural health anti GMO movement — BM Gates. Even Mrs. Gates talks about how thrilled she is (on video) at getting an Ebola vaccine for the market (Ebola shots for everyone!), and Bill? Well you just have to watch Pirates of Silicon Valley to know what a copycat he is (there is nothing original about this man), and the boy funded by his Mama (some suggest he ripped off Apple and other companies) is now on a crusade to vaccinate everyone and rid Africa of those nasty viruses, and stop hunger in Africa in 15 years. That’s quite a feat of course.  There are many who believe he has the sinister idea of curbing the population with these tactics of his, but then again I’m sure those folks are just wearing their tin foil hats a little too tight.
I, for one, don’t know if even he could devise such an evil plan. What I do know is that I no longer trust Jamie Oliver (and I certainly never trusted Gates or his “better half”). If Jamie can wax poetic about the detriments of GMOs and say no to GMO’s, and then team up with the Monsanto Monsters themselves two minutes later? Then he’s not to be trusted. Sorry Jamie. Go sleep with the enemy. If they paid you I hope it’s worth it to sell your soul to the (Monsanto/GMO/”Vaccines for all”) Devil. We have faith that you haven’t sold out completely Jamie. Dig deep inside you for the non GMO Jamie and remember your original cause. Wake up and smell the glyphosate. It’s not too late.
Xo Hugs, it’s not too late too late to turn away from the evil!
Erin
Source: http://www.healthnutnews.com/jamie-oliver-sleeping-with-the-enemy/

4 thoughts on “What The? The “Jamie Oliver Twist” – Sleeping With the Enemy”