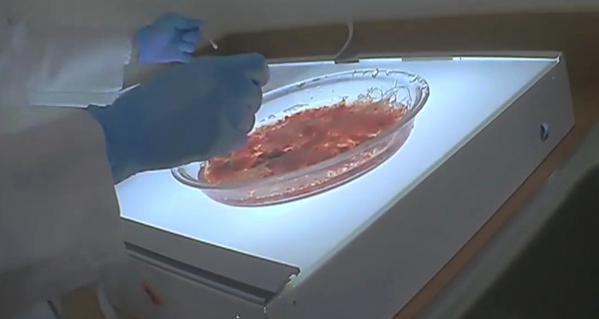 The Scientist recently ran commentary by John D. Loike  questioning the ethics of transplanting human brains cells into other species. The piece entitled “When Does a Smart Mouse Become Human?” begins describing the research at the University of Rochester where mice were injected with glial cells from human fetuses. Glial cells are cells that support neurons in the nervous systems. The mice incorporated these glial cells into their brain and “outperformed normal mice almost fourfold in a variety of cognition tests.”

The researchers stressed that the mice still had mouse brains, saying “This does not provide the animals with additional capabilities that could in any way be ascribed or perceived as specifically human. Rather, the human cells are simply improving the efficiency of the mouse’s own neural networks. It’s still a mouse.”

But the mixing of human brain cells with those of other species, especially those of other primates, raise serious ethical considerations. These issues are important and Loike discusses them.

What Loike does not discuss is ethical implications of the source of the human brain cells used in this research. The paper in Journal of Neuroscience clearly states that the glial cells came from second trimester abortions:

For xenograft of human fetal GPCs, cells were extracted from second-trimester human fetuses (18–22 weeks gestation age) obtained at abortion. The forebrain ventricular/subventricular zones were dissected from the brain, the samples chilled on ice, minced and dissociated using papain/DNase, as described previously (Roy et al., 1999, 2000), always within 3 h of extraction. The dissociates were maintained overnight in minimal media of DMEM/F12/N1 with 10 ng/ml bFGF. Samples were deidentified and obtained with the approval of the University of Rochester Research Subjects Review Board.

The explosive Center for Medical Progress videos have exposed the market in aborted baby parts. This is where some aborted babies have ended up: dissected, minced up and transplanted into mice.

I can confidently say that the mice did not need the human brain tissue as much as the baby did.

It is time to take our heads out of the sand. There is plenty of research that is being performed with aborted fetuses. In this case, scientists hope that this model model will help illuminate the contribution of glial cells to human neurological disorders. It is a noble goal, but the source of the glial cells morally taints all their research. They could have used cells from ethical sources like a natural miscarriage, but they did not.

We need to stop using tissue from abortion in research. If we don’t there will likely be medical advancements that pro-lifers cannot in good conscience use because they are tainted with the blood of innocents.

One thought on “Where Do the Body Parts of Aborted Babies End Up? Scientists Transplant Their Brain Tissue Into Mice”