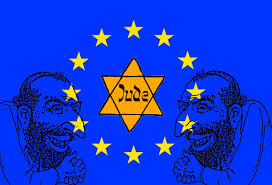 The screen grab above is of a tweet by Barbara Spectre, a Jew married to a Rabbi and working in Sweden for not only the destruction of Europe via multiculturalism (and other methods perhaps) but also the re-establishment of Jewishness in Europe. She heads Paideia, European Institute of Jewish Studies, which is funded in part by the Swedish government. The above screen grab is evidence of at least the crime of (c) Direct and public incitement to commit genocide;. This covers the ‘mental’ element of genocide. Barbara Spectre also breaches the ‘physical’ element as she works towards making Europe multicultural (b) Conspiracy to commit genocide;  . This article has been tweeted to almost every minister of the Swedish government, the Swedish police and many other prominent people in Sweden. If no action is taken against Barbara Spectre and all the people who have contributed to the genocide of the Swedish people (just one of the white Christian nations targeted) then we can be sure that our governments are also complicit in acts of genocide and also in denial of real acts of genocide, both of which are crimes in international and national law.

This is the text of the speech by Kamau Kambon, the man in the video which Barbara Spectre praised and cheered on with her genocidal comment….

“Now how do I know that the white people know that we are going to come up with a solution to the problem. I know it because they have retina scans, racial profiling, DNA banks, and they’re monitoring our people to try to prevent the ONE person from coming up with the ONE idea. And the one idea is, how we are going to exterminate white people because that in my estimation is the only conclusion I have come to. We have to exterminate white people off the face of the planet to solve the problem. *tepid applause* Now I don’t care whether you clap or not but I’m saying to you that we need to solve this problem because they are going to kill us. And I will leave on that. So we just have to set up our own system and stop playing and get very serious and not get diverted from coming up with a solution to the problem and the problem on the planet is white people.”