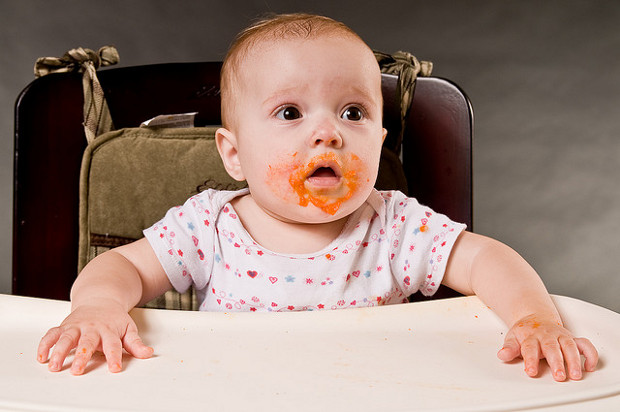 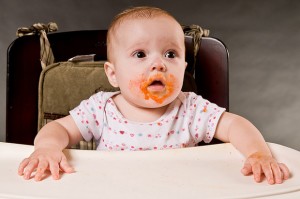 Perhaps one of the biggest and most frightening crimes against young infants by pediatricians, food marketers, and parents everywhere is the recommendation that young infants should be eating rice cereals or other grains.

Ages ago, when I had my first child, I enrolled in the government program for Women, Infants and Children (commonly known as WIC).

In my first (and only) appointment with the government-provided nutritionist, I learned two things. One, I was anemic. And two, I should start feeding my yet-to-be-born son rice cereal at the age of 4 months. This is a very common assertion backed up with absolutely no science or tradition and perpetuated by food marketers intent on creating a market for industrially-produced infant foods.

So glad you asked!

In the Food Renegade’s nutritional philosophy, tradition has weight. After all, we’ve survived anywhere from 7,000 to 77,000 generations on this planet (depending on whose science you believe). If we didn’t know how to adequately nourish our children all that time, how did we even get here?

And guess what? Traditional cultures didn’t (and don’t) feed their young babies infant cereal. Among the few cultures who fed their babies a gruel of grains, their practice radically differed from what we do today. First, they only introduced the gruel after the baby was more than a year old. And second, they ensured that the gruel was mildly fermented by soaking the grains for 24 hours or more.

In order to digest grains, your body needs to make use of an enzyme called amylase. Amylase is the enzyme responsible for splitting starches. And, guess what? Babies don’t make amylase in large enough quantities to digest grains until after they are a year old at the earliest. Sometimes it can take up to two years. You see, newborns don’t produce amylase at all. Salivary amylase makes a small appearance at about 6 months old, but pancreatic amylase (what you need to actually digest grains) is not produced until molar teeth are fully developed! First molars usually don’t show up until 13-19 months old, on average.

Undigested grains wreak havoc on your baby’s intestinal lining. It can throw off the balance of bacteria in their gut and lead to lots of complications as they age including: food allergies, behavioral problems, mood issues, and more.

What does this mean? Don’t feed your baby grains (or even highly starchy foods), until all of their first molars have emerged. This means no rice cereals, no Cheerios, no Goldfish, no oatmeal, no infant crackers. It means that when you sit down with them at a restaurant, you shouldn’t placate them with the free rolls.

WHAT CAN YOU FEED YOUR BABY INSTEAD?

It’s the million dollar question, and the answer isn’t all that hard. It’s based on a few key principles.

More than 50% of the calories in mother’s milk comes from saturated fat. That’s for a good reason. Babies need fat in order to grow their brains, nervous system, and cell membranes. The remaining calories come from protein, and carbohydrates in the form of lactose. (And guess what? Newborns actually make lactase, the enzyme necessary to digest lactose. Plus, lactase is also common in raw milk. So, whatever deficiency in lactase production your baby might have is made up for by the raw mother’s milk you provide them while breastfeeding.) In traditional cultures, it’s common to breastfeed children at least two years and generally well into toddler-hood. So, don’t fret the saturated fat. In fact, you should embrace it!

These vitamins are essential for your baby to grow a strong, sturdy bone structure. They also dramatically affect how your baby’s face forms. If you’re wondering why it matters if your baby has a wide face with high cheekbones versus a narrow face, check out the downloadable handout/workbook in this post.

Again, I trust the wisdom of generation after generation of mothers more than I trust marketers trying to sell me an industrial-waste-product-turned-baby-food. We’ve got a long history of nourishing our infants well, pre-industrial revolution (the only exceptions being times of famine or poverty).

Around the world, through the centuries, almost universally, the first solid food we’ve ever introduced to babies were egg yolks. I recommend the egg yolks from pastured hens.

Egg yolk supplies cholesterol needed for mental development as well as important sulphur-containing amino acids. Egg yolks from pasture-fed hens or hens raised on flax meal, fish meal or insects are also rich in the omega-3 long-chain fatty acids found in mother’s milk but which may be lacking in cow’s milk. These fatty acids are essential for the development of the brain. Parents who institute the practice of feeding egg yolk to baby will be rewarded with children who speak and take directions at an early age. The white, which contains difficult-to-digest proteins, should not be given before the age of one year. (source)

You can start introducing egg yolks as soon as your baby shows an interest in eating solid foods. For us, our rule has been that we introduce solids when our babies have been old enough to pick the food up and put it in their own mouth. This usually happens somewhere between 6 to 8 months. I’ve known mothers who spoon-fed egg yolks to babies at an earlier age (around 4 months). While that’s a generally safe practice, it’s also work! I like the babies-feeding-themselves model because it’s easy.

(Where to find eggs from pastured hens)

Preferably, this is raw, organic liver from grass-fed cows. But even cooked liver has its benefits. You can grate frozen liver and mash it into egg yolks to spoon feed it to baby. As soon as my babies demonstrated an interest in spooning their own foods (usually around 10-15 months), I set them loose with soft liver patés and braunsweiger.

Small amounts of grated, raw organic liver may be added occasionally to the egg yolk after six months. This imitates the practice of African mothers who chew liver before giving it to their infants as their first food. Liver is rich in iron, the one mineral that tends to be low in mother’s milk possibly because iron competes with zinc for absorption. (source)

What about liver from industrially raised cattle? While grass-fed is best, followed by certified organic, liver is so nutrient-dense that I don’t hesitate to occasionally feed my baby liver from an industrial source. This, of course ignores the ethical issues of feeding ourselves industrially produced animal foods. The truth is that sometimes organic or grass-fed organ meats are hard to come by or afford. So, if you must compromise, you should at least stick to foods that are as nutrient dense as possible. Because of industrial processing methods, I wouldn’t want to feed my baby raw industrial liver products. But I think that if the liver is cooked, eating it is generally preferable to not feeding them liver at all.

If you’re worried about industrial toxins being stored in the liver, then I say “Aren’t you smart?” Because, of course, that’s why you’d prefer organic liver over the alternatives. But, if you’re otherwise doing right by your child’s gut (feeding them probiotic rich foods and avoiding sugars & grains), their guts can (generally speaking) handle the elimination of the toxins.

(Where to find liver from grass-fed cows)

Again, I’d stick to raw butter from grass-fed cows, but any real butter will do in a pinch. Butter is an easy-to-come-by animal fat, and you should try to stick to feeding your infant foods rich in animal fats as much as possible. You can mash butter into cooked vegetables like potatoes, carrots, or turnips. Or, you can simply do what I do and feed it to your baby straight.

Yep, you read right. When we’re at a restaurant, instead of placating my little ones with the free rolls, we placate them with the free butter that comes with the rolls! (I violate my own no-spoon-feeding rule here because it’s easier than having an impatient baby on my hands.)

(Where to find butter from grass-fed cows)

These soured milk products are probiotic and help build up a balance of good bacteria in your baby’s gut, thus ensuring that they properly digest all their foods. Plus, introducing your baby to the sour taste early can help their palate enjoy more of these nutrient-rich foods later. I’d start by introducing them to just a spoonful or so at a time, as soon as the baby expresses an interest in solid foods (no earlier than 6 months old). As they get older, you can give them more of these foods, generally in proportion to their interest in eating them.

(Where to find starter cultures for yogurt, kefir, and buttermilk)

Bananas are one of the few carbohydrate rich foods that are also rich in amylase. So, they come with the enzyme your baby needs to digest them already built-in. You can start feeding your baby bananas when they start making salivary amylase and expressing an interest in eating solid foods (no younger than 6 months old).

Last, but not least, you can start feeding your baby cooked vegetables and meats when they’re old enough to express an interest in these foods (no younger than 10 months) and self-feed. It goes without saying that these should be incredibly tender if not totally mashed to provide for your baby’s lack of teeth. I’ve always enjoyed putting on a small crock pot of a bone-broth based stew featuring meat and veggies and feeding my baby the super-tender foods that come from it over the course of a few days. It’s easy. It’s not messy. And it ensures that the veggies are eaten with lots of the animal fats necessary for your baby to digest the vitamins in the vegetables.

2 thoughts on “WHY DITCH THE INFANT CEREALS?”