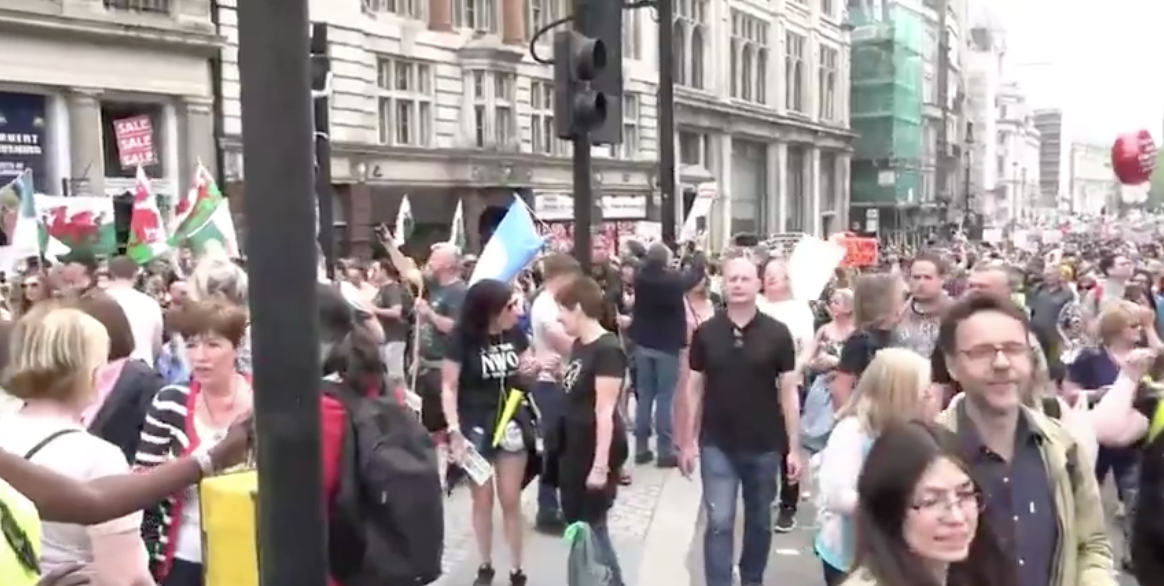 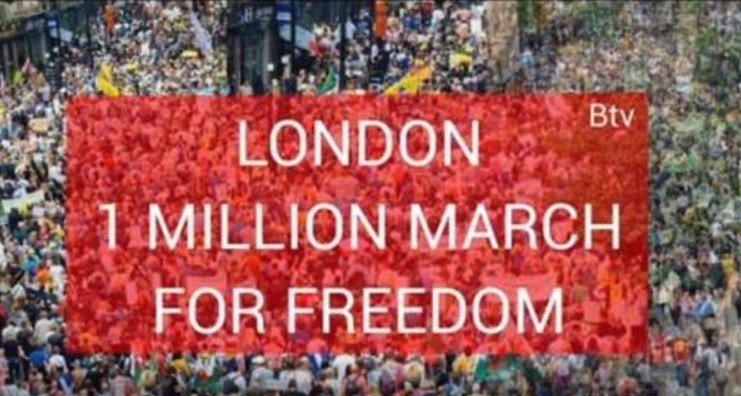 A million people hit the streets in London yesterday to demand their freedom back.

This is largely being censored or downplayed in the corporate media, but with 1 million people marching through the streets of London, actual photos and videos of the crowds are easy to find online.

We will include several below.

Meanwhile, millions of Americans dutifully put on their masks and set out to take a vacation for the Memorial Day weekend. 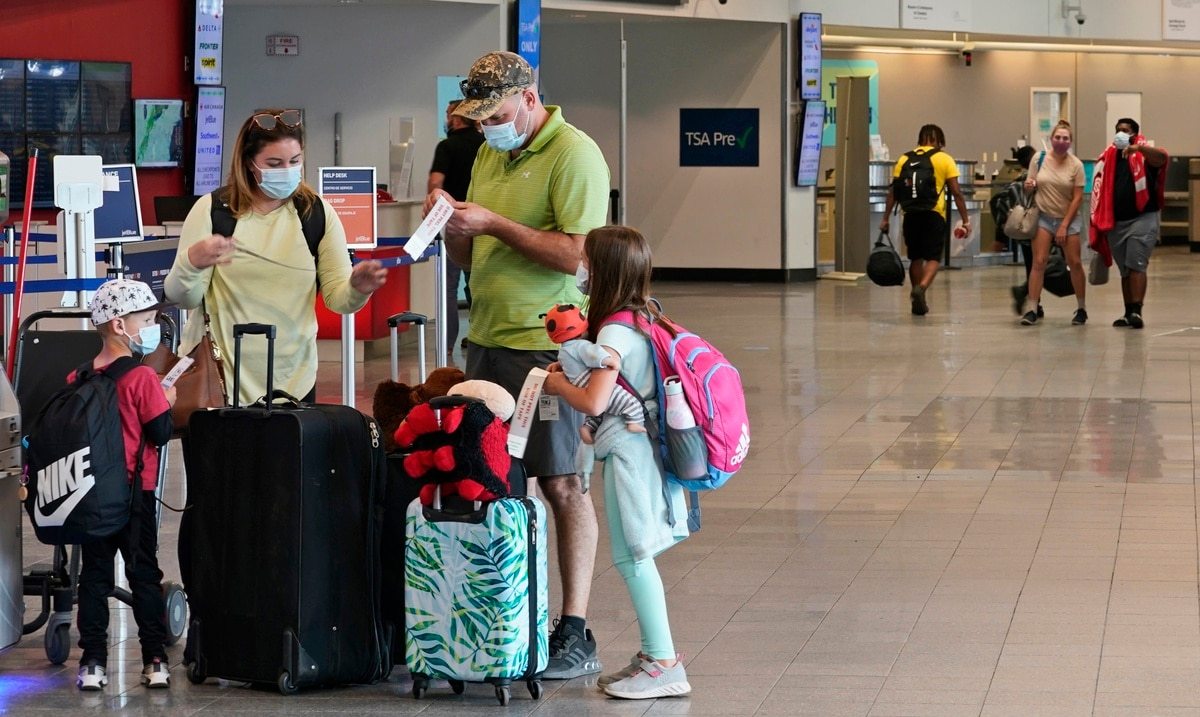 Memorial Day: More Than 1.8 Million Americans Travel By Air For The Holiday. Source.

London, May 29th: Something wonderful, something real . . .

Yesterday saw the another warning shot across the bows of the globalist front group that has hijacked the nation’s governance: knock off  what you are doing – or else!

The London demo on 29th was YET AGAIN huge. Reports are that it was four miles long and comprised a million citizens.

It is impossible to know exact numbers but as someone who was there, I’d say these reports are pretty accurate. It was an honour to be part of it and to find oneself among so many fine people from every generation and social background.

The sheer scale of the protest was breathtaking. The latest in a long series of demos and the biggest yet, it showed that far from running out of steam, the movement is growing fast, accumulating more citizens as the list of government lies, deceits, cons, falsehoods and efforts to terrorise grows.

If it goes on this way, if the government does not get honest and straight, the architects of this attack on the nation will find they have no friends left.

The corporate media, of course, either tries to pretend it didn’t happen or to minimise it with false reports of “hundreds” and the usual misrepresentation of of what the demonstrations are about.

Thanks to the wonders of modern technology, it is now easy to prove what REALLY took place and show the CMM (Corporate Media Matrix) up as resoundingly false. At yesterday’s demonstration there were  hundreds of thousands of people taking pictures and making video clips so that by today there are in circulation hundreds of thousands of pieces of evidence that nullify the CMM effort to convey a false reality.

And so inexorably, lie by disproven lie, the corporate media’s status as “conveyor of news”  suffers a death of a thousand cuts. Its decline can be traced to its failure to do its job and to honour the trust once placed in it.

Couple that unmasked dishonesty with the erosion of it pretence at impartiality. It is relatively easy to determine that editors and so forth answer to owners ands those owners have their own agenda. By way of a brief example, take Rupert Murdoch who owns the biggest vaccine company in Australia. His family has been deeply immersed in that industry for generations, and he has partnerships with Glaxo and with all the big vaccine makers. [Source https://degraw.substack.com/…/crimes-against-humanity…]

The Corporate Media likes to think it sets public opinion. It doesn’t. If the CMM set public opinion we would not be seeing protests like yesterday’s in London. And of course for every person who was there, there are ten who weren’t for one reason or another, so one can surmise that what is occurring as our already considerable numbers grow, is a seismic shift of public opinion in a direction OPPOSITE to the direction in which the CMM, leaving no truth unturned, is trying to steer it .

The CMM is a dead irrelevance as a resource for truthful information. It has been supplanted by the People’s Media which operates free of corporate/oligarchical control.

The People’s Media, multifaceted and representing the much broader and more contentious spectrum of freely exchanged ideas, is not of course always right in everything it says. We leave that pretence to a Corporate Media that stifles all challenges to its orthodoxy.

The People’s Media, manned by earnest human beings with no claims to omniscient infallibility, makes mistakes but in that climate of freely exchanged and debated ideas, those mistakes can be freely challenged and debated rather than welded irrevocably into the national psyche by authoritarian diktat.

The People’s Media has but to remain sincere, to get its facts straight as best it can and take responsibility for honest errors. Its primary mission is to maintain the public’s access to ideas, data and viewpoints outside the orthodox spectrum. It is to persuade people to use their native capabilities to inspect, question and challenge what they are told rather than blindly accept everything that comes out of the mouths of devious politicians and the front men for corporate vested interests.

As such, the People’s Media is seeking to do the exact opposite to what the corporate media is doing.

Observably, the corporate media, long dead as a source of real news, is seeking to implant a matrix of ideas for which there is no challenge.

Part of that effort is, for instance, trying to keep from the nation’s citizens the horrible truth that there has now arisen a thus-far peaceful revolt against the lies and deceit of a criminal government.

And so it is incumbent upon the People’s Media, which in effect actually embraces every single member of the Freedom Movement with a voice to speak or a social media or email account through which to relay, to disseminate as broadly as possible the evidence of what really happened.

So here is our contribution, which is also a celebration, courtesy of some very fine people who made these videos and Bitchute that published them, of the fact that in the face of oppression, humanity is rising.

What REALLY happened yesterday was something wonderful . .